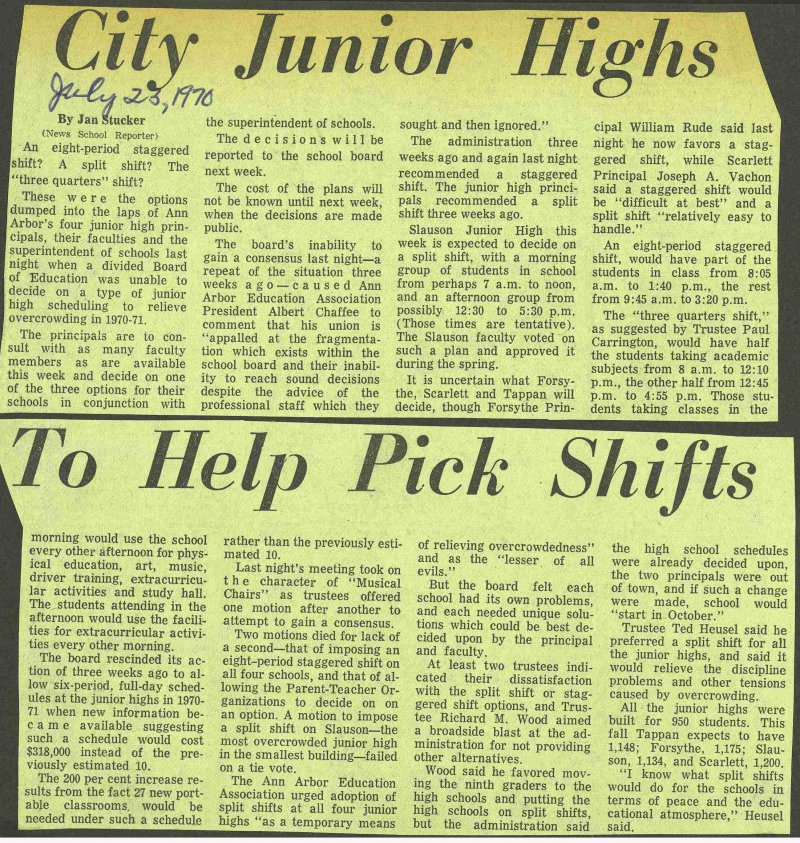 I An eight-period staggered Ishift? A split shift? The "three quarters" shift? [ These were the options dumped into the laps of Ann Arbor's four junior high principáis, their faculties and the superintendent of schools last night when a divided Board of Education was unable to decide on a type of junior high scheduling to relieve overcrowding in 1970-71. The principáis are to consult with as many faculty members as are available this week and decide on one of the three options for their schools in conjunction with the superintendent of schools. The decisions will be reported to the school board next week. The cost of the plans will not be known until next week, when the decisions are made public. The board's inability to gain a consensus last night- a repeat of the situation three weeks ago - caused Ann Arbor Education Association President Albert Chaffee to comment that his union is "appalled at the fragmentation which exists within the school board and their inability to reach sound decisions despite the advice of the professional staff which they sought and then ignored." The administration three weeks ago and again last night recommended a staggered shift. The junior high principáis recommended a split shift three weeks ago. Slauson Junior High this week is expected to decide on a split shift, with a morning group of students in school from perhaps 7 a.m. to noon, and an afternoon group from possibly 12:30 to 5:30 p.m. (Those times are tentative). The Slauson faculty voted on such a plan and approved it during the spring. It is uncertain what Forsythe, Scarlett and Tappan will decide, though Forsythe cipal William Rude said last night he now favors a staggered shift, while Scarlett Principal Joseph A. Vachon said a staggered shift would be "diffieult at best" and a split shift "relatively easy to handle." An eight-period staggered shift, would have part of the students in class f rom 8:05 a.m. to 1:40 p.m., the rest from 9:45 a.m. to 3:20 p.m. The "three quarters shift," as suggested by Trustee Paul Carrington, would have half the students taking academie subjects from 8 a.m. to 12:10 p.m., the other half from 12:45 p.m. to 4:55 p.m. Those students taking classes in the morning would use the school every other áfternoon for physical education, art, music, driver training, extracurricular activities and study hall. The students attending in the afternoon would use the facilities for extracurricular activities every other morning. The board rescinded its action of three weeks ago to allow six-period, full-day schedules at the junior highs in 197071 when new information bec a m e available suggesting such a schedule would cost $318,000 instead of the previously estimated 10. The 200 per cent increase results from the fact 27 new portable classrooms. would be needed under such a schedule rather than the previously estimated 10. Last night's meeting took on the character of "Musical Chairs" as trustees offered one motion after another to attempt to gain a consensus. Two motions died for lack of a second- that of imposing an eight-period staggered shift on all four schools, and that of allowing the Parent-Teacher Organizations to decide on on an option. A motion to impose a split shift on Slauson- the most overcrowded junior high in the smallest building- failed on a tie vote. The Ann Arbor Education Association urged adoption of split shifts at all four junior highs "as a temporary means of relieving overcrowdedness" and as the "lesser of all evils." But the board feit each school had its own problems, and each needed unique solutions which could be best decided upon by the principal and faculty. At least two trustees indicated their dissatisfaction with the split shift or staggered shift options, and Trustee Richard M. Wood aimed a broadside blast at the administration for not providing other alterna tives. Wood said he favored moving the ninth graders to the high schools and putting the high schools on split shifts, but the administration said the high school schedules were already decided upon, the two principáis were out of town, and if such a change were made, school would "start in October." Trustee Ted Heusel said he preferred a split shift for all the junior highs, and said it would relieve the discipline problems and other tensions caused by overcrowding. All the junior highs were built for 950 students. This fall Tappan expects to have 1,148; Forsythe, 1,175; I son, 1,134, and Scarlett, 1,200. "I know what split shifts would do for the schools in terms of peace and the educational atmosphere," Heusel said.