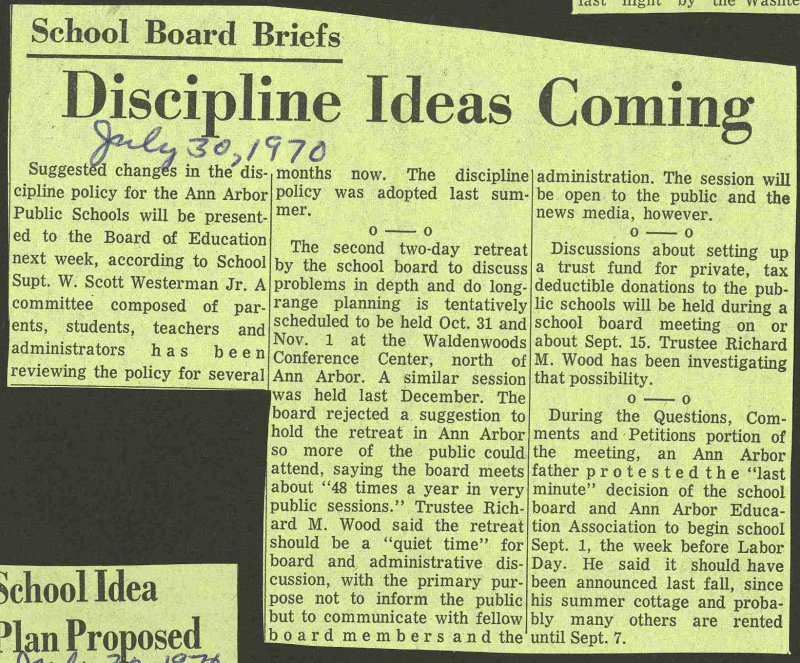 Suggesteci changis in the discipline policy for the Ann Arbor Public Schools will be presented to the Board of Education next week, according to School Supt. W. Scott Westerman Jr. A committee composed of parents, students, teachers and administrators has been reviewing the policy for several months now. The discipline policy was adopted last sum mer. o o The second two-day retreat by the school board to discuss problems in depth and do longrange planning is tentatively scheduled to be held Oct. 31 and Nov. 1 at the Waldenwoods Conference Center, north of Ann Arbor. A similar session was held last December. The board rejected a suggestion to hold the retreat in Ann Arbor so more of the public could attend, saying the board meets about "48 times a year in very public sessions." Trustee Richard M. Wood said the retreat should be a "quiet time" for board and administrative discussion, with the primary purpose not to inform the public but to communicate with fellow board me mbers and the administration. The session wil] be open to the public and the news media, however. o o Discussions about setting up a trust fund for private, tax deductible donations to the public schools will be held during a school board meeting on or about Sept. 15. Trustee Richard M. Wood has been investigating that possibility. o - - o During the Questions, Comments and Petitions portion of the meeting, an Ann Arbor father protestedthe "last minute" decisión of the school soard and Ann Arbor Educa:ion Association to begin school Sept. 1, the week before Labor Day. He said it should have )een announced last fall, since lis summer cottage and probably many others are rented until Sept. 7.