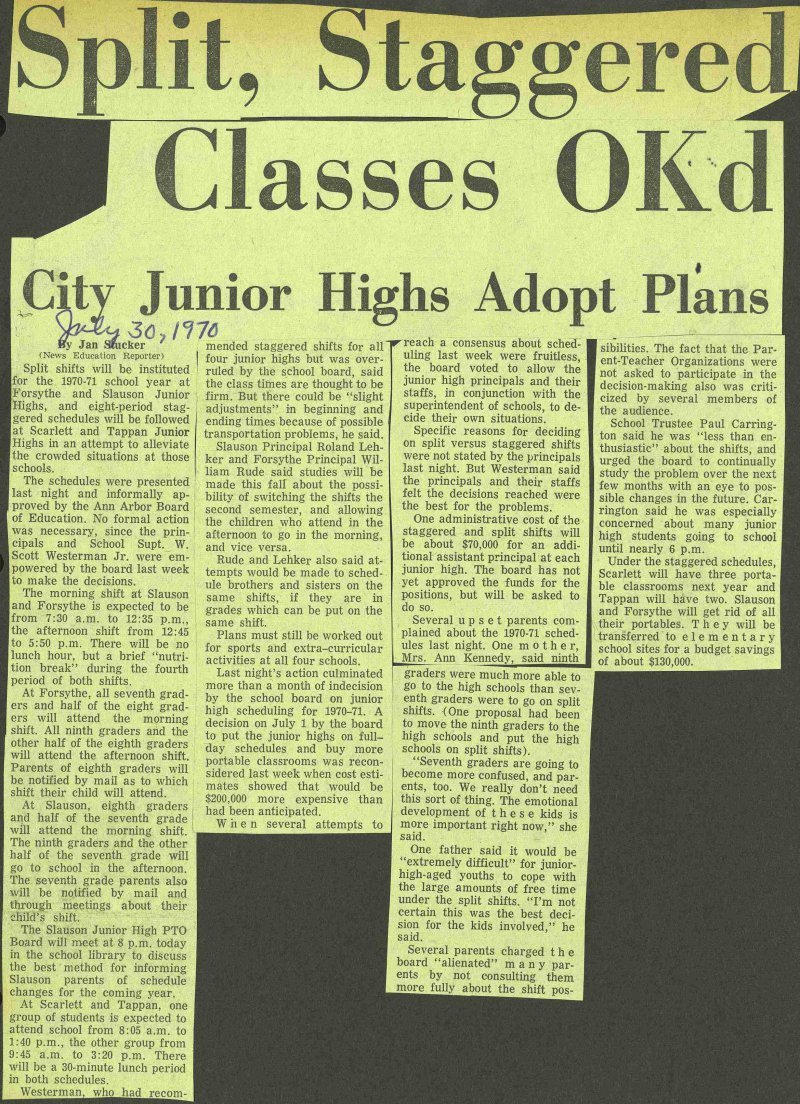 Split shifts will be instituted Ifor the 1970-71 school year at IForsythe and Slauson Junior iHighs, and eight-period stagI gered schedules will be followed lat Scarlett and Tappan Junior iHighs in an attempt to alleviate [the crowded situations at those I schools. The schedules were presented last night and informally apI proved by the Ann Arbor Board of Education. No formal action was necessary, since the principáis and School Supt. W. Scott Westerman Jr. were empowered by the board last week I to make the deeisions. The morning shift at Slauson land Fprsythe is expected to be Ifrom 7:30 a.m. to 12:35 p.m., the afternoon shift f rom 12:45 to 5:50 p.m. There will be no lunch hour, but a brief "nutrition break" during the fourth period of both shifts. At Forsythe, all seventh graders and half of the eight graders will attend the morning shift. All ninth graders and the other half of the eighth graders will attend the afternoon shift. Parents of eighth graders will be notified by mail as to which shift their child wül attend. At Slauson, eighth graders and half of the seventh grade will attend the morning shift. The ninth graders and the other half of the seventh grade will go to school in the afternoon. The seventh grade parents also will be notified by mail and through meetings about their child's shift. The Slauson Junior High PTO Board will meet at 8 p.m. today in the school library to discuss the best method for informing Slauson parents of schedule changes for the coming year. At Scarlett and Tappan, one group of students is expected to attend school f rom 8:05 a.m. to 1:40 p.m., the other group from 9:45 a.m. to 3:20 p.m, There will be a 30-minute lunch period in both schedules. Westerman, who had mended staggered shifts for all" four junior highs but was overruled by the school board, said the class times are thought to be firm. But there could be "slight adjustments" in beginning and ending times because of possible transportation problems, he said. Slauson Principal Roland Lehker and Forsythe Principal William Eude said studies will be made this falf about the possibility of switching the shifts the second semester, and allowing the children whó attend in the afternoon to go in the morning, and vice versa. Rude and Lehker also said attempts would be made to schedule brothers and sisters on the same shifts, if they are in grades which can be put on the same shift. Plans must still be worked out for sports and extra-curricular activities at all four schools. Last night's action culminated more than a month of indecisión by the school board on junior high scheduling for 1970-71. A decisión on July 1 by the board to put the junior highs on fullday schedules and buy more portable classrooms was reconsidered last week when cost estimates showed that would be $200,000 more expensive than had been anticipated. When several attempts to Teach a consensus about scheed uling last week were fruitless, the board voted to allow the junior high principáis and their staffs, in conjunction with the superintendent of schools, to decide their own situations. Specific reasons for deciding on split versus staggered shifts were not stated by the principáis last night. But Westerman said the principáis and their staffs feit the decisions reached were the best for the problems. One administrative cost of the staggered and split shifts will be about $70,000 for an additional assistant principal at each junior high. The board has not yet approved the funds for the positions, but will be asked to do so. Several u p s e t parents coraplained about the 1970-71 schedules last night. One m o t h e r, Mrs. Ann Kennedy, said ninth graders were much more able to go to the high schools than seventh graders were to go on split shifts. (One proposal had been to move the ninth graders to the high schools and put the high schools on split shifts). "Seventh graders are going to become more confused, and parents, too. We really don't need this sort of thing. The emotional development of t h e s e kids is more important right now," she said. One father said it would be "extremely difficult" for juniorhigh-aged youths to cope with the large amounts of free time under the split shifts. "I'm not certain this was the best decisión for the kids involved," he said. Several parents charged the board "alienated" m a n y parents by not Consulting them more fully about the shift sibilities. The fact that the Parent-Teacher Organizations were not asked to particípate in the decision-making also was criticized by several members of the audience. School Trustee Paul Carrington said he was "less than enthusiastic" about the shifts, and urged the board to continually study the problem over the next few months with an eye to possible changes in the future. Carrington said he was especially concerned about many junior high students going to school until nearly 6 p.m. Under the staggered schedules, Scarlett will have three portable elassrooms next year and Tappan will háve two. Slauson and Forsythe will get rid of all their portables. T h e y will be transferred to elementary school sites for a budget savings of about $130,000.