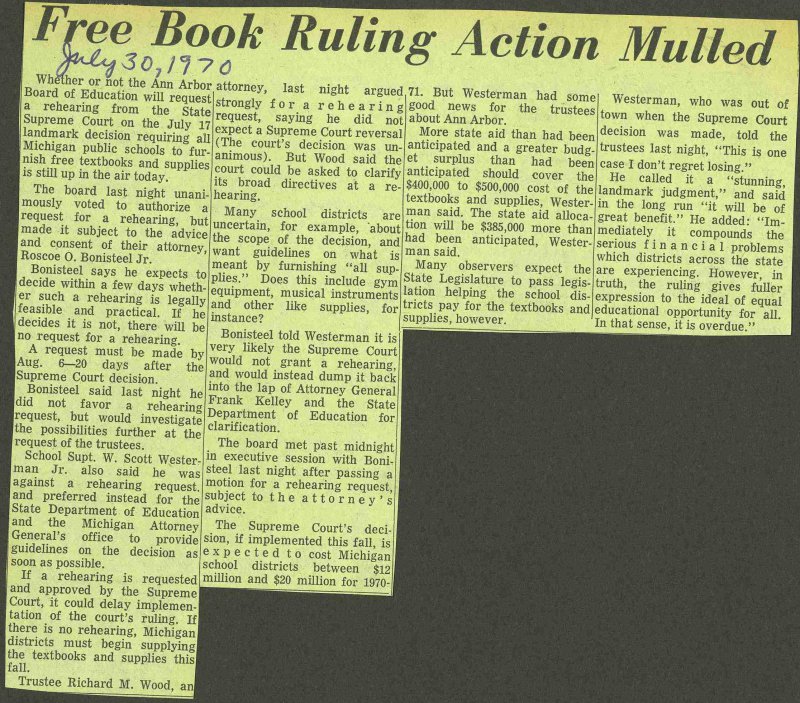 Whéfher or not the Ann Arbor Board of Education will request a rehearing from the State Supreme Court on the July 17 landmark decisión requiring all Michigan public schools to furmsh free textbooks and supplies is still up in the air today. The board last night unanimously voted to authorize a request for a rehearing, but made it subject to the advice and consent of their attorney Roscoe O. Bonisteel Jr Bonisteel says he expects to decide within a few days whether such a rehearing is legally feasible and practical. If he decides it is not, there wül be no request for a rehearing A request must be made by Aug. 6-20 days after the, Supreme Court decisión Bonisteel said last night he did not favor a rehearing request, but would investígate the possibilities further at the request of the trustees. bchool Supt. W. Scott Westerman Jr. also said he' was against a rehearing request and preferred instead for the State Department of Educationl and the Michigan Attorney General's office to provide guidelines on the decisión as soon as nossihle If a rehearing is requested and approved by the Supreme Court, it could delay implementation of the court's ruling. If, there is no rehearing, Michigan districts must begin supplying the textbooks and supplies this fall. __ Trustee Richard M. Wood, anl attorney, last night argued strongly for a rehearing request, saying he did not expect a Supreme Court reversal (The court's decisión was unammous). But Wood said the court could be asked to clarify lts broad directives at a rehearing. Many school districts are uncertain, for example, about Ithe scope of the decisión, and want guidelines on what is meant by furnishing "all supplies." Does this include gym equipment, musical instruments and other like supplies, for mstance? Bonisteel told Westerman it is very likely the Supreme Court would not grant a rehearing and would instead dump it back into the lap of Attorney General Frank Kelley and the state Department of Education for clarification. The board met past midnight in executive session with Bonisteel last night after passing a motion for a rehearing request subject to the attorney's advice. The Supreme Court's decisión, if implemented this f all, is expected to cost Michigan school districts between $12 million and $20 million for 71. But Westerman had some good news for the trustees about Ann Arbor. More state aid than had been anticipated and a greater budget surplus than had been anticipated should cover the $400,000 to $500,000 cost of the textbooks and supplies, Westerman said. The state aid allocation will be $385,000 more than had been anticipated, Westerman said. Many observers expect the state Legislature to pass legisation helping the school 1 ncts pay for the textbooks and supplies, however. Westerman, who was out of town when the Supreme Court decisión was made, told the trustees last night, "This is one case I don't regret losing." He called it a "stunning, landmark judgment," and said m the long run "it will be of great benefit." He added: "Immediately it compounds the serious f i n a n c i a 1 problems which districts across the state are experiencing. However, in truth, the ruling gives fuller expression to the ideal of equal educational opportunity for all. In that sense, it is overdue."