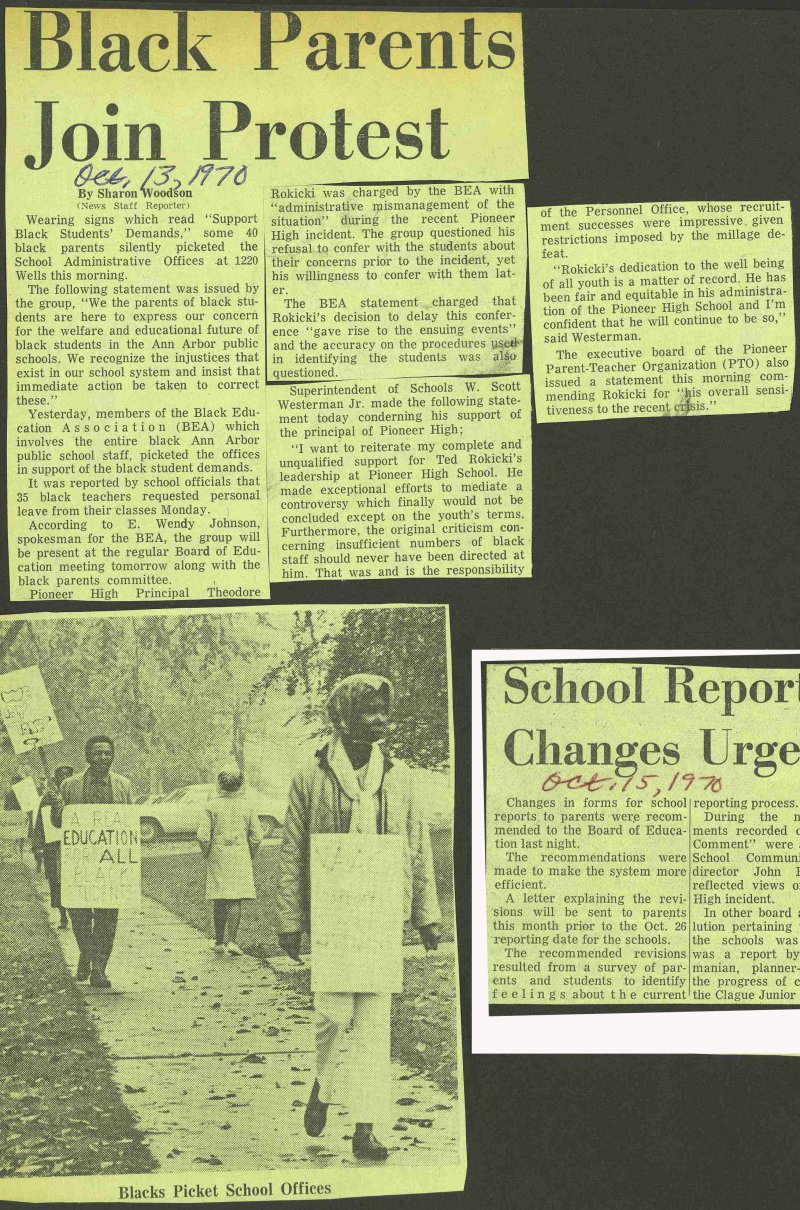 Wearmg signs wftich reaü "bupport Black Students' Demands," some 40 black parents silently picketed the School Administrative Offices at 1220 Wells this morning. The following statement was issued by the group, "We the parents of black students are here to express our concern for the welfare and educational future of black students in the Ann Arbor public schools. We recognize the injustices that exist in our school system and insist that immediate action be taken to correct these." Yesterday, members of the Black Education Association (BEA) which involves the entire black Ann Arbor public school staff, picketed the offices in support of the black student demands. It was reported by school officials that 35 black teachers requested personal leave from their classes Monday. According to E. Wendy Johnson, i spokesman for the BEA, the group will be present at the regular Board of Education meeting tomorrow along with the black parents committee. , Pioneer Hish Principal Theodore Rokicki was charged by the BEA with I "administrative mismanagement of the situation" during the recent Pioneer High incident. The group questioned nis refusal to confer with the students about their concerns prior to the incident, yet his willingness to confer with them later. The BEA statement . charged that Rokicki' s decisión to delay this conference "gave rise to the ensuing events" and the accuracy on the procedures usetK" in identifying the students was als questioned. , Superintendent of Schools W. Scott Westerman Jr. made the following statement today conderning his support of the principal of Pioneer High; "I want to reitérate my complete and unqualified support for Ted Rokicki's leadership at Pioneer High School. He made exceptional efforts to mediate a controversy which finally would not be concluded except on the youth's terms. Furthermore, the original criticism concerning insufficient numbers of black staff should never have been directed at him. That was and is the responsibility of the Personnel Office, whose recruitment successes were impressive. given restrictions imposed by the millage feat. "Rokicki's dedication to the well being of all youth is a matter of record. He has been fair and equitable in nis admimstration of the Pioneer High School and 1 m confident that he will continue to be so, said Westerman. The executive board of the Pioneer Parent-Teacher Organization (PTO) also issued a statement this morning commending Rokicki for "is overall sensiüveness to the recent crfsis." _J