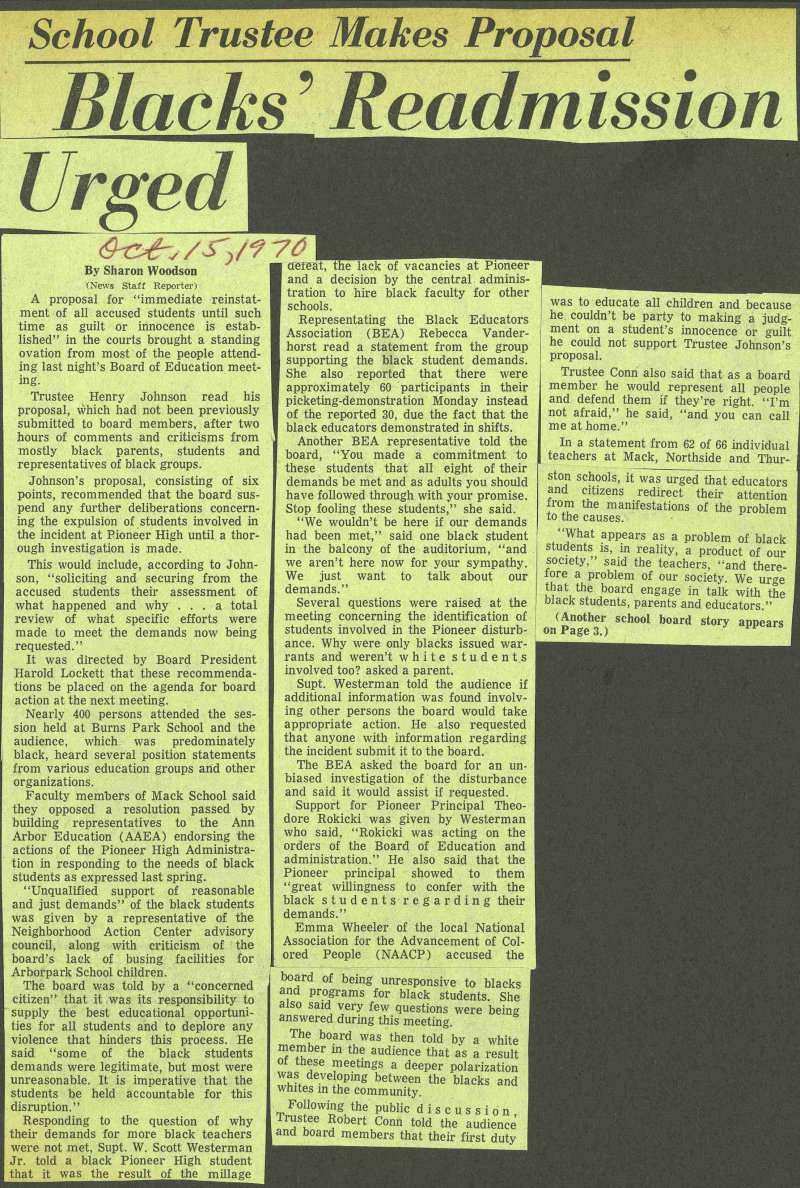 A proposal for "immediate reinstatment of all accused students until such time as guilt or innocence is established" in the courts brought a standing ovation from most of the people attending last night's Board of Education meeting. Trustee Henry Johnson read nis proposal, whieh had not been previously submitted to board members, after two hours of comments and criticisms from mostly black parents, students and representatives of black groups. Johnson's proposal, consisting of six points, recommended that the board suspend any further deliberations concerning the expulsión of students involved in the incident at Pioneer High until a thorough investigation is made. This would include, according to Johnson, "soliciting and securing from the accused students their assessment of what happened and why ... a total review of what specific efforts were made to meet the demands now being requested." It was directed by Board President Harold Lockett that these recommendations be placed on the agenda for board action at the next meeting. Nearly 400 persons attended the session held at Burns Park School and the audience, which was predominately black, heard several position statements from various education groups and other organizations. Faculty members of Mack School said they opposed a resolution passed by building representatives to the Ann Arbor Education (AAEA) endorsing the actions of the Pioneer High Administration in responding to the needs of black students as expressed last spring. "Unqualified support of reasonable and just demands" of the black students was given by a representative of the Neighborhood Action Center advisory council, along with criticism of the board's lack of busing facilities for Arborpark School children. The board was told by a "concerned citizen" that it was its responsibility to supply the best educational opportunities for all students and to deplore any violence that hinders this process. He said "some of the black students demands were legitímate, but most were unreasonable. It is imperative that the students be held accountable for this disruption." Responding to the question of why their demands for more black teachers were not met, Supt. W. Scott Westerman Jr. told a black Pioneer High student that it was the result of the millage crefeat, the lack of vacancies at Pioneer and a decisión by the central administration to hire black faculty for other schools. Representating the Black Educators Association (BEA) Rebecca Vanderhorst read a statement from the group supporting the black student demands. She also reported that there were approximately 60 participants in their picketing-demonstration Monday instead of the reported 30, due the fact that the black educators demonstrated in shifts. Another BEA representative told the board, "You made a commitment to these students that all eight of their demands be met and as adults you should have followed through with your promise. Stop fooling these students," she said. "We wouldn't be here if our demands had been met," said one black student in the balcony of the auditorium, "and we aren't here now for your sympathy. We just want to talk about our demands." Several questions were raised at the meeting concerning the identification of students involved in the Pioneer disturbance. Why were only blacks issued warrants and weren't white students involved too? asked a parent. Supt. Westerman told the audience if additional information was found involving other persons the board would take appropriate action. He also requested that anyone with information regarding the incident submit it to the board. The BEA asked the board for an unbiased investigation of the disturbance and said it would assist if requested. Support for Pioneer Principal Theodore Rokicki was given by Westerman who said, "Rokicki was acting on the orders of the Board of Education and administra tion." He also said that the Pioneer principal showed to them "great willingness to confer with the black students regarding their demands." Emma Wheeler of the local National Association for the Advancement of Colored People (NAACP) accused the board of being unresponsive to blacks I and programs for black students. She I also said very few questions were being I answered during this meeting. The board was then told by a white I member m the audience that as a result I of these meetings a deeper polarization was developing between the blacks and whites in the community. Following the public d i s c u s s i ó n , Trustee Robert Conn told the audience and board members that their first dutv was to edúcate all children and because he, couldn't be party to making a judgment on a student's innócenee or guilt he could not support Trustee Johnson's proposal. Trustee Conn also said that as a board member he would represent all people and defend them if they're right. "I'm not afraid," he said, "and you can cali me at home." In a statement from 62 of 66 individual teachers at Mack, Northside and Thurston schools, it was urged that educators and citizens redirect their attention from the manifestations of the problem to the causes. "What appears as a problem of black students is, in reality, a product of our society," said the teachers, "and therefore a problem of our society. We urge that the board engage in talk with the black students, parents and educators." (Another school board story appears I on Page 3.)