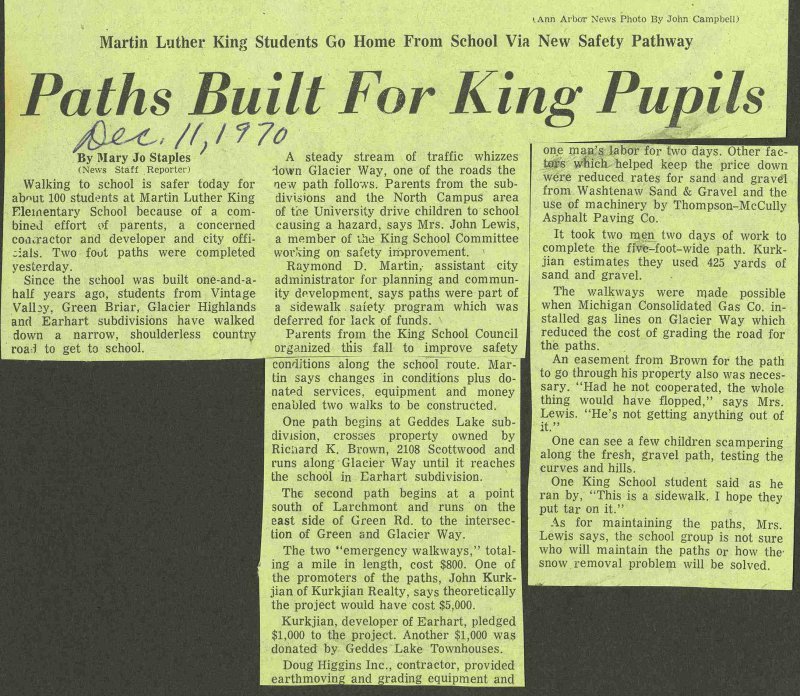 Walking to school is safer today tor ab"ut 100 students at Martin Luther King Elementary School because of a eombineJ effort of parents, a concerned cOiKractor and developer and city officials. Two fout paths were completed yesterday. Since the school was built one-and-ahalf years ago, students from Vintage Valby, Green Briar, Glacier Highlands and Earhart subdivisions have walked down a narrow, shoulderless country roal to get to school. A steady stream of traffic whizzes down Glacier Way, one of the roads the new path foHows. Parents from the subdivisions and the North Campus area of the University drive children to school causing a hazard, says Mrs. John Lewis, a member of Uie King School Committee working on safety improvement. Raymond D. assistant city administrator for planning and community development, says paths were part of a sidewaïk . saiety program which was deferred for lack of funds. Parents from the King School Council organized tliis fall to improve safety conditions along the school route. Martin says changes in conditions plus donated services, equipment and money enabled two walks to be constructed. One path begins at Geddes Lake subdivisión, crosses property owned by Richard K. Brown, 2108 Scottwood and runs along ■ Glacier Way until it reaches the school in Earhart subdivisión. The second path begins at a point south of Larchmont and runs on the east side of Green Rd. to the intersection of Green and Glacier Way. The two "emergency walkways," totaling a mile in length, cost $800. One of the promoters of the paths, John Kurkjian of Kurkjian Realty, says theoretically the project would have cost $5,000. Kurkjian, developer of Earhart, pledged $1,000 to the project. Another $1,000 was donated by Geddes Lake Townhouses. Doug Higgins Inc., contractor, provided earthmoving and grading equipment and one man's labor for two days. Other factors which helped keep the price down were reduced rates for sand and gravel from Washtenaw Sand & Gravel and the use of machinery by Thompson-McCully Asphalt Paving Co. It took two meii two days of work to complete the fiv&-foot-wide path. Kurkjian estimates they used 425 yards of sand and gravel. The walkways were njade possible when Michigan Consolidated Gas Co. installed gas lines on Glacier Way which reduced the cost of grading the road for the paths. An easement from Brown for the path to go through his property also was necessary. "Had he not cooperated, the whole thing would have flopped," says Mrs. Lewis. "He's not getting anything out of it." One can see a few children scampering along the fresh, gravel path, testing the curves and hills. One King School student said as he ran by, "This is a sidewalk. I hope they put tar on it." As for maintaining the paths, Mrs. Lewis says, the school group is not sure who will maintain the paths or how thesnow removal problem will be solved.