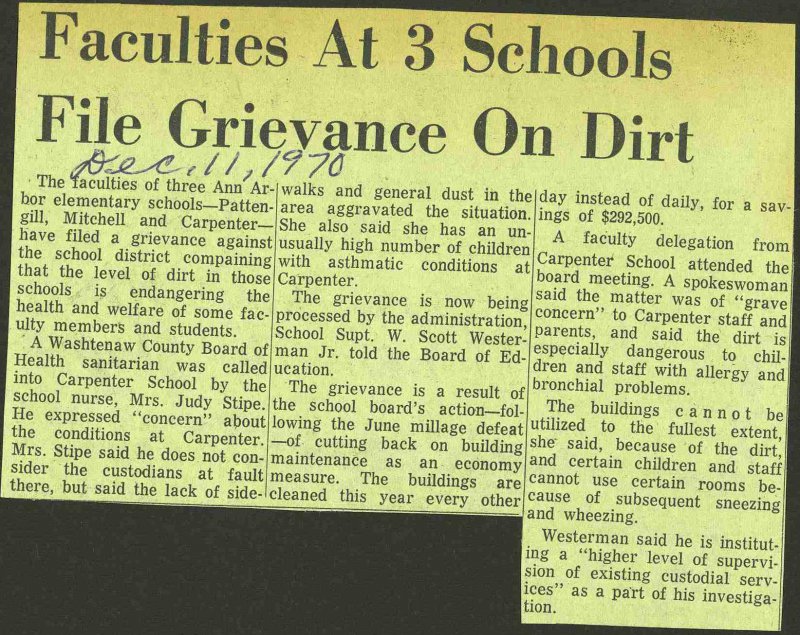 The ïaculties of three Ann Arbor elementary schools- Pattengill, Mitchell and Carpenter have ñled a grievance against the school district compaining that the level of dirt in those schools is endangering the health and welfare of some faculty members and students. A Washtenaw County Board of Health sanitarian was called mto Carpenter School by the school nurse, Mrs. Judy Stipe He expressed "concern" about the conditions at Carpenter. Mrs. Stipe said he does not consider the custodians at fault there-hut said the lack of walks and general dust in the area aggravated the situation j She also said she has an unusually high number of children with asthmatic conditions at Carpenter. The grie vanee is now being srocessed by the administration School Supt. W. Scott Westerman Jr. told the Board of Education. The grie vanee is a result of he school board's action- folowing the June millage defeat -of cutting back on building naintenance as an economy ueasure. The buildings are leaned this year every other Iday instead of daily, for a sav[ïngs of $292,500. A faculty delegation from Carpenter School attended the board meeting. A spokeswoman said the matter was of "grave concern" to Carpenter staff and parents, and said the dirt is i especially dangerous to chiláren and staff with allergy and bronchial problems The buildings cannot be utihzed to the fullest extent I sher said, because of the dirt [and certain children and staff cannot use certain rooms because of subsequent sneezing and wheezing. s . Westerman said he is instituímg a "higher level of supervisión of existing custodial services as a part of his