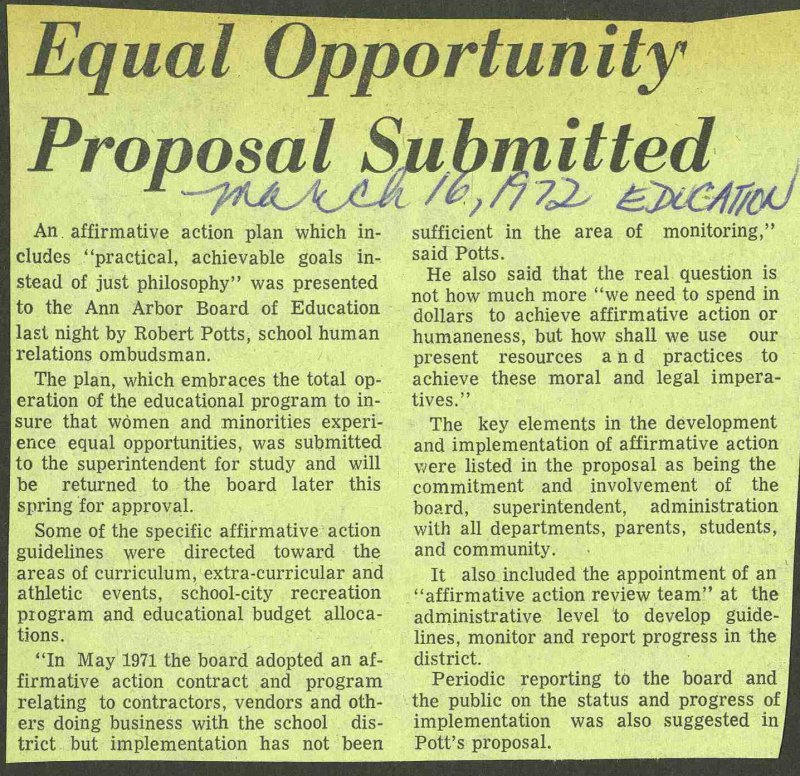 An affirmative action plan which includes "practical, achievable goals instead of just philosophy" was presented to the Ann Arbor Board of Education last night by Robert Potts, school human relations ombudsman. The plan, which embraces the total operation of the educational program to insure that women and minorities experience equal opportunities, was submitted to the superintendent for study and will be returned to the board later this spring for approval. Some of the specific affirmative action guidelines were directed toward the areas of curriculum, extra-curricular and athletic events, school-city recreation program and educational budget allocations. "In May 1971 the board adopted an affirmative action contract and program relating to cohtractors, vendors and others doing business with the school district but implementation has not been sufficient in the area of monitoring," said Potts. He also said that the real question is not how much more "we need to spend in dollars to achieve affirmative action or humaneness, but how shall we use our present resources and practices to achieve these moral and legal imperatives." The key elements in the development and implementation of affirmative action were listed in the proposal as being the commitment and involvement of the board, superintendent, administration with all departments, parents, students, and community. It also included the appointment of an "affirmative action review team" at the administrative level to develop guidelines, monitor and report progress in the district. Periodic reporting to the board and the public on the status and progress of implementation was also suggested in Pott's proposal.