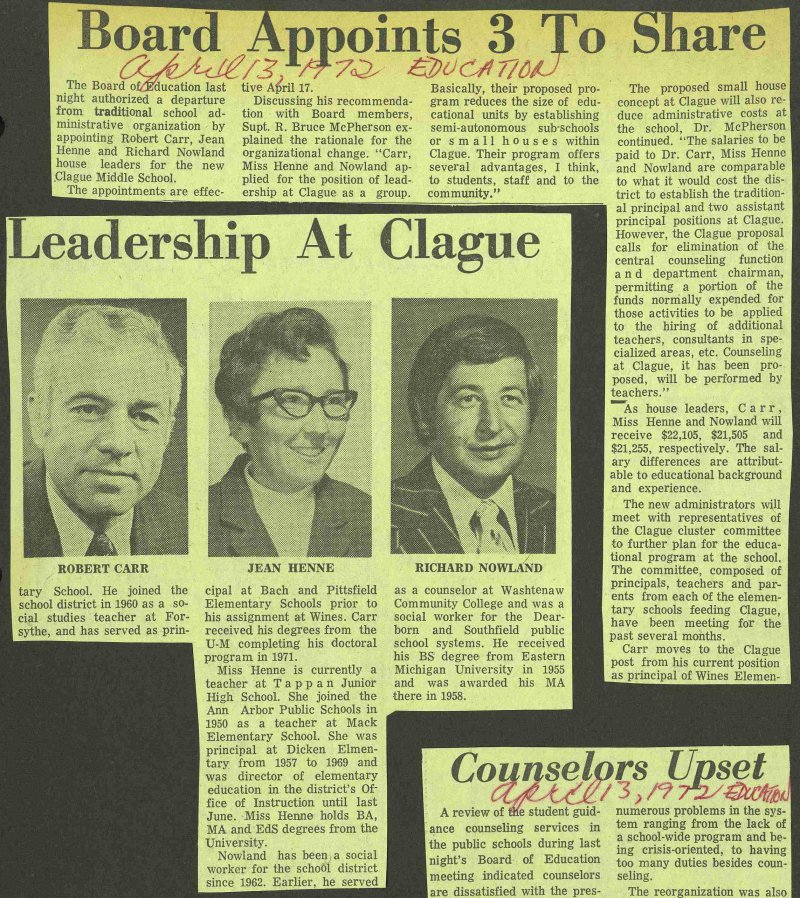 The Board ofEaucation last night authorized a departure from traditional school administrative organization by appointing Robert Carr, Jean Henne and Richard Nowland house leaders for the new I.Clague Middle School. The appointments are :A5, tive Af ril 17. Discussing his recommendation with Board members, Supt. R. Bruce McPherson explained the rationale for the organizational change. "Carr, Miss Henne and Nowland applied for the position of leadership at Clague as a group. Basically, their proposed program reduces the size of educational units by establishing semi-autonomous sub-schools orsmall houses within Clague. Their program offers several advantages, I think, to students, staf f and to the community." The proposed small house I concept at Clague will also 1 duce administrative costs at I the school, Dr. McPherson continued. "The salaries to be paid to Dr. Carr, Miss Henne and Nowland are comparable to what it would cost the district to establish the traditional principal and two assistant principal positions at Clague. However, the Clague proposal calis for elimination of the central counseling function and department chairman, permitting a portion of the funds normally expended for those activities to' be applied to the hiring of additional teachers, consultants in specialized areas, etc. Counseling at Clague, it has been proposed, will be performed by teachers." ""Ás house leaders, Carr, Miss Henne and Nowland will I receive $22,105, $21,505 and $21,255, respectively. The i ary differences are attributible to educational background and experience. The new administrators will I meet with representatives of I the Clague cluster committee I to further plan for the I ;ional program at the school. I The committee, composed of I principáis, teachers and I ents from each of the I tary schools feeding Clague, I have been meeting for the I jast several months. Carr moves to the Clague I post from his current position I as principal of Wines tary School. He joined the i school district in 1960 as a social studies teacher at ForI sythe, and has served as cipal at Bach and Pittsfield Elementary Schools prior to his assignment at Wines. Carr received his degrees from the U-M completing his doctoral program, in 1971. Miss Henne is currently a teacher at Tappan Junior High School. She joined the Ann Arbor Public Schools in 1950 as a teacher at Mack Elementary School. She was principal at Dicken Elmentary from 1957 to 1969 and was director of elementary education in the district' s Office of Instruction until last June. Miss Henne holds BA, MA and EdS degreés from the University. Nowland has been a social worker for the schooi district since 1962. Earlier, he served as a counselor at Washtenaw I Community College and was a I social worker for the I born and Southfield public I school systems. He received I his BS degree from Eastern I Michigan University in 1955 I and was awarded his MA I there in 1958.