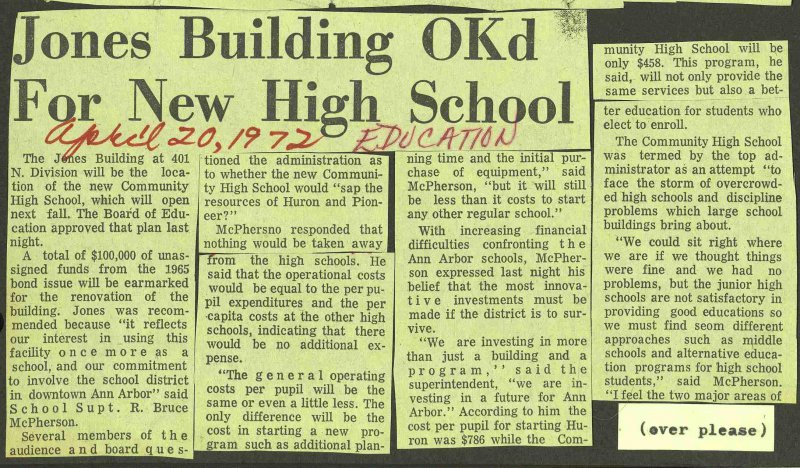 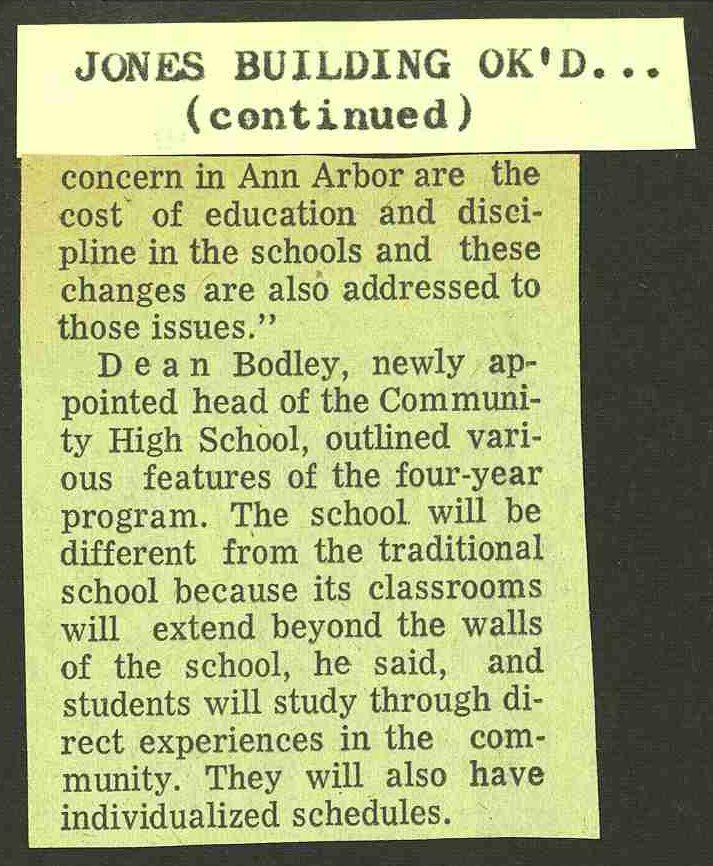 The Jones Building at 401 N. Division will be the location of the new Community High School, which will open next fall. The Board of Education approved that plan last night. A total of $100,000 of unassigned funds from the 1965 bond issue will be earmarked for the renovation of the building. Jones was recommended because "it reflects our interest in using this facility once more as a school, and our commitment to involve the school district in downtown Ann Arbor" said School Supt. R. Bruce McPherson. Several members of the audience and board questioned the administration as to whether the new Community High School would "sap the resources of Huron and Pioneer?" McPhersno responded that nothing would be taken away from the high schools. He said that the operational costs would be equal to the per pupil expenditures and the per capita costs at the other high schools, indicating that there would be no additional expense. "The general operating costs per pupil will be the same or even a little less. The only difference will be the cost in starting a new program such as additional 'u f 1 1 v r ning time and the initial purchase of equipment," said McPherson, "but it will still be less than it costs to start any other regular school." With increasing financial difficulties confronting the Ann Arbor schools, McPherson expressed last night his belief that the most innovative investments must be made if the district is to survive. "We are investing in more than just a building and a program,' said the superintendent, "we are investing in a future for Ann Arbor." According to him the cost per pupil for starting 1 ron was $786 while the mumty High School will be only $458. This program, he said, will not only provide the same services but also a ter education for students who elect to enroll. The Community High School was termed by the top administrator as an attempt "to face the storm of overcrowded high schools and discipline problems which large school buildings bring about. "We could sit right where we are if we thought things were fine and we had no problems, but the junior high schools are not satisfactory in providing good educations so we must find seom different approaches such as middle schools and alternative education programs for high school students," said McPherson. "I feel the two major areas of concern in Ann Arbor are the cost of education and discipline in the schools and these changes are alsó addressed to those issues." Dean Bodley, newly appointed head of the Community High School, outlined various features of the four-year program. The school will be different from the traditional school because its classrooms will extend beyond the walls of the school, he said, and students will study through direct experiences in the community. They will also have individualized schedules.