Bodley: The Man Behind The Plan 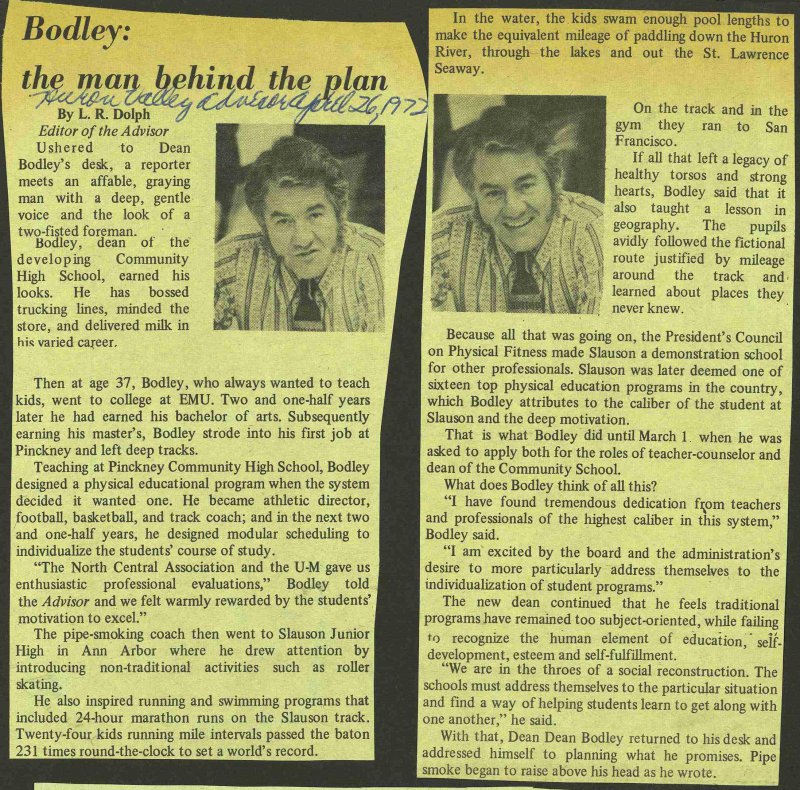 Ushered to Dean Bodley's desk, a reporter meets an affable, graying I man with a deep, gentle voice and the look of a I two-fisted foreman. Bodley, dean ot the I developing Community [High School, earned his llooks. He has bossed Itrucking Hnes, minded the I store, and delivered milk in I his varied career. Then at age 37, Bodley, who always wanted to teach kids, went to college at EMU. Two and one-half years later he had earned his bachelor of arts. Subsequently earning his master's, Bodley strode into his first job at Pinckhey and left deep tracks. Teaching at Pinckney Community High School, Bodley designed a physical educational program when the system dëcided it wanted one. He became athletic director, football, basketball, and track coach; and in the next two and one-half years, he designed modular scheduling to individualize the students' course of study. "The North Central Association and the U-M gave us enthusiastic professional evaluations," Bodley told the Advisor and we feit warmly rewarded by the students' i motivation to excel." I The pipe-smoking coach then went to Slauson Junior I High in Ann Arbor where he drew attention by I introducing non-traditional activities such as roller I skating. He also inspired running and swimming programs that I included 24-hour marathon runs on the Slauson track. I Twenty-four kids running mile intervals passed the baton I 231 times round-the-clock to set a world's record. In the water, the kids swam enough pool lengths to make the equivalent mileage of paddling down the Huron River, through the lakes and out the St. Lawrence Seaway. On the track and in the gym they ran to San Francisco. If all that left a legacy of healthy torsos and strong hearts, Bodley said that it also taught a lesson in geography. The pupils avidly followed the fictional route justified by mileage around the track and learned about places they never knew. Because all that was going on, the President' s Council on Physical Fitness made Slauson a demonstration school for other professionals. Slauson was later deemed one of sixteen top physical education programs in the country, which Bodley attributes to the caliber of the student at Slauson and the deep motivation. That is what Bodley did until March 1. when he was asked to apply both for the roles of teacher-counselor and dean of the Community School. What does Bodley think of all this? "I have found tremendous dedication fipm teachers and professionals of the highest caliber in this system," Bodley said. "I am excited by the board and the administration's I desire to more particularly address themselves to the individualization of student programs." The new dean continued that he feels traditional I programs have remained too subject-oriented, while failing I to recognize the human element of education, self-l development, esteem and self-fulfilhnent. I "We are in the throes of a social reconstruction. The I schools must address themselves to the particular situation I and find a way of helping students learn to get along with I one another," he said. With that, Dean Dean Bodley returned to hisdesk andl addressed himself to planning what he promises. Pipel smoke began to raise above his head as he wrote.