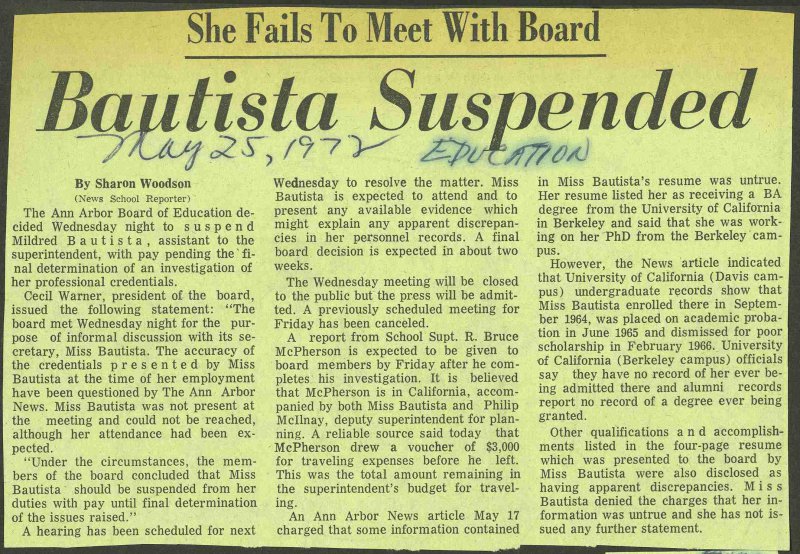 The Ann Arbor Board of Education decided Wednesday night to suspend Mildred Bautista, assistant to the superintendent, with pay pending the final determination of an investigation of her professional credentials. Cecil Warner, president of the board, issued the following statement: "The board met Wednesday night for the purpose of informal discussion with its secretary, Miss Bautista. The accuracy of the credentials presented by Miss Bautista at the time of her employment have been questioned by The Ann Arbor News. Miss Bautista was not present at the meeting and could not be reached, although her attendance had been expected. "Under the circumstances, the members of the board concluded that Miss Bautista should be suspended from her duties with pay until final determination of the issues raised." A hearing has been scheduled for next Wednesday to resolve the matter. Miss Bautista is expected to attend and to present any available evidence which might explain any apparent discrepaneies in her personnel records. A final board decisión is expected in about two weeks. The Wednesday meeting will be closed to the public but the press will be admitted. A previously scheduled meeting for Friday has been canceled. A report from School Supt. R. Bruce McPherson is expected to be given to board members by Friday after he completes his investigation. It is believed that McPherson is in California, accompanied by both Miss Bautista and Philip Mcllnay, deputy superintendent for planning. A reliable source said today that McPherson drew a voucher of $3,000 for traveling expenses before he left. This was the total amount remaining in the superintendent's budget for traveling. An Ann Arbor News article May 17 charged that some information contained ■f U"-w in Miss Bautista's resume was untrue. Her resume listed her as receiving a BA degree from the University of California in Berkeley and said that she was working on her "PhD from the Berkeley campus. However, the News article indicated I that University of California (Davis I pus) undergraduate records show that I Miss Bautista enrolled there in I ber 1964, was placed on academie I tion in June 1965 and dismissed for poor I scholarship in February 1966. University I of California (Berkeley campus) officials I say they have no record of her ever I ing admitted there and alumni records I report no record of a degree ever being I granted. Other quaïifications and 1 ments listed in the four-page resume I which was presented to the board by I Miss Bautista were also disclosed as I having apparent discrepancies. M i s s I Bautista denied the charges that her I formation was untrue and she has not I sued any further statement.