Report On Bautista Ordered By Friday 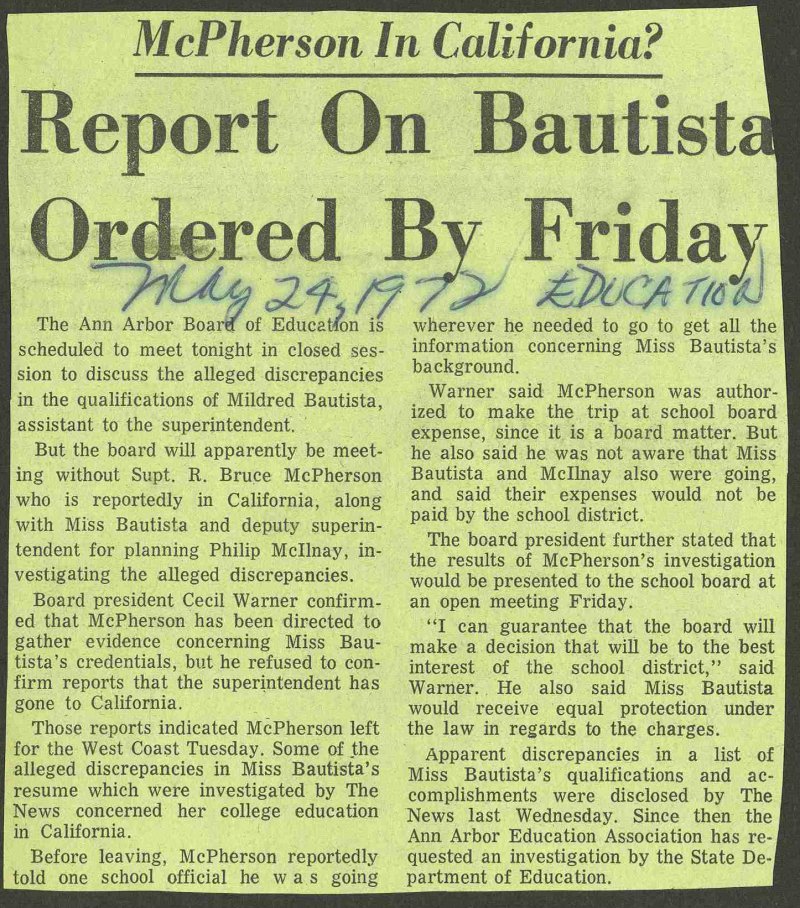 The Ann Arbor Boartf of Education is scheduled to meet tonight in closed session to discuss the alleged diserepancies in the qualifications of Mildred Bautista, assistant to the superintendent. But the board will apparently be meeting without Supt. R. Bruce McPherson who is reportedly in California, along with Miss Bautista and deputy superintendent for planning Philip Mcllnay, investigating the alleged diserepancies. Board president Cecil Warner confirmed that McPherson has been directed to gather evidence concerning Miss Bautista 's credentials, but he refused to confirm reports that the superintendent has gone to California. Those reports indicated McPherson left for the West Coast Tuesday. Some of the alleged diserepancies in Miss Bautista's resume which were investigated by The News concerned her college education in California. Before leaving, McPherson reportedly told one school official he w a s going - wherever he needed to go to get all the I information concerning Miss Bautista's I background. Warner said McPherson was authorized to make the trip at school board expense, since it is a board matter. But he also said he was not aware that Miss Bautista and Mcllnay also were going, and said their expenses would not be paid by the school district. The board president further stated that the results of McPherson's investigation would be presented to the school board at an open meeting Friday. "I can guarantee that the board will make a decisión that will be to the best interest of the school district," said Warner. He also said Miss Bautista I would receive equal protection under I the law in regards to the charges. Apparent discrepancies in a list of I Miss Bautista's qualifications and I complishments were disclosed by The I News last Wednesday. Since then the I Ann Arbor Education Association has re-I quested an investigation by the State De-B partment of Education. I