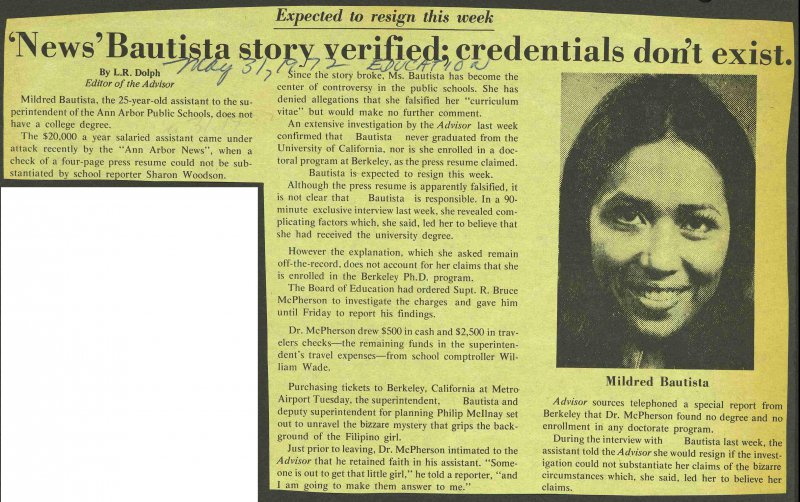 Mildred Bautista, the 25-year-old assistant to the superintendent of the Ann Arbor Public Schools, does not have a college degree. The $20,000 a year salaried assistant carne under attack recently by the "Ann Arbor News", when a check of a four-page press resume could not be substantiated by school reporter Sharon Woodson. p Since the story broke, Ms. Bautista has become the center of controversy in the public schools. She has denied allegations that she falsified her "curriculum vitae" but would make no further comment. An extensive investigation by the Advisor last week confirmed that Bautista never graduated from the University of California, nor is she enrolled in a doctoral program at Berkeley, as the press resume claimed. Bautista is expected to resign this week. Although the press resume is apparently falsified, it is not clear that Bautista is responsible. In a 90minute exclusive interview last week, she revealed complicating factors which, she said, led her to believe that she had received the university degree. However the explanation, which she asked remain I off-the-record, does not account for her claims that she is enrolled in the Berkeley Ph.D. program, I The Board of Education had ordered Supt. R. Bruce McPherson to investígate the charges and gave him I until Friday to report his findings. Dr. McPherson drew $500 in cash and $2,500 in travelers checks - the remaining funds in the superintendent's travel expenses - from school comptroller William Wade. Purchasing tickets to Berkeley, California at MetroAirport Tuesday, the superintendent, Bautista and deputy superintendent for planning Philip Mcllnay set out to unravel the bizzare mystery that grips the background of the Filipino girl. Just prior to leaving, Dr. McPherson intimated to the I Advisor that he retained faith in his assistant. "SomeI one is out to get that little girl," he told a reporter, "and I am going to make them answer to me." ' Advisor sources telephoned a special report from I Berkeley that Dr. McPherson found no degree and no I enrollment in any doctórate program. During the interview with Bautista last week, the I assistant told the Advisor she would resign if the I igation could not substantiate her claims of the bizarre I circumstances which, she said, led her to believe her I claims. - -- -