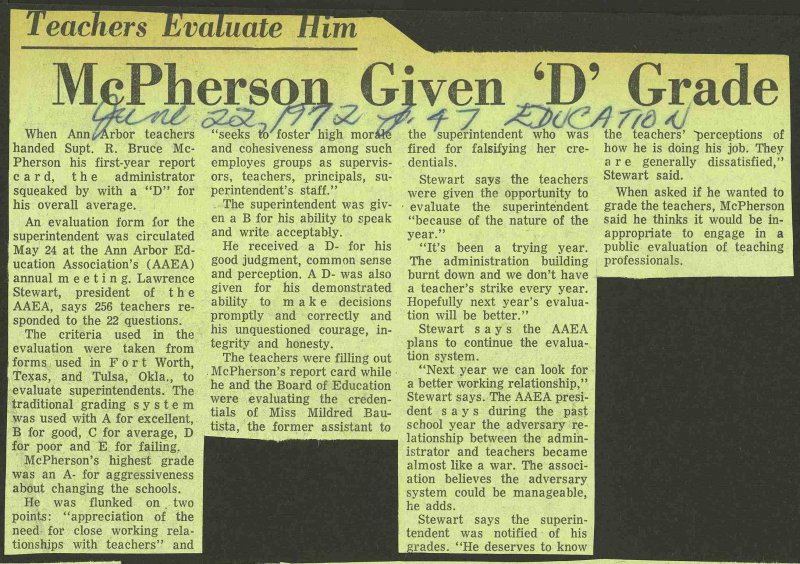 When AnnArbor teachers handed Supt. R. Bruce McPherson his first-year report c a r d, the administrator squeaked by with a "D" for his overall average. An evaluation form ior the superintendent was circulated May 24 at the Ann Arbor Ed' ucation Association's (AAEA) I annual meeting. Lawrence Stewart, president of the AAEA, says 256 teachers responded to the 22 questions. The criteria used in the evaluation were taken from I forms used in F o r t Worth, ( Texas, and Tulsa, Okla., to evalúate superintendents. The traditional grading system was used with A for excellent, B for good, C for average, D for poor and È for failing. McPherson's highest grade was an for aggressiveness about changing the schools. He was flunked on two points: "appreciation of the need for close working relationships with teachers" and O&&C-, y oes y? "seeks to f o ster high morare and cohesiveness among such employés groups as supervisors, teachers, principáis, superintendent's staff." . The superintendent was given a B for his ability to speak and write acceptably. He reeeived a for his good judgment, common sen se and perception. A was also given for his demonstrated ability to m a k e decisions promptly and correctly and his unquestioned courage, integrity and honesty. The teachers were filling out McPherson's report card while he and the Board of Education were evaluattng the credentials of Miss Mildred Bautista, the former assistant to the superintendent who was fired for falsifying her credentials. Stewart says the teachers were given the opportunity to evalúate the superintendent "because of the nature of the year." "It's been a trying year. The administration building burnt down and we don't have a teacher's strike every year. Hopefully next year's evaluation will be better." Stewart s a y s the AAEA plans to continue the evaluation system. "Next year we can look for a better working relationship," Stewart says. The AAEA president s a y s during the past school year the adversary relationship between the administrator and teachers became almost like a war. The association believes the adversary system could be manageable, he adds. Stewart says the superintendent was notified of his I grades. "He deserves to know the teachers' Tperceptions of how he is doing his job. They are generally dissatisfied," Stewart said. When asked if he wanted to grade the teachers, McPherson said he thinks it would be inappropriate to engage in a public evaluation of teaching professionals.