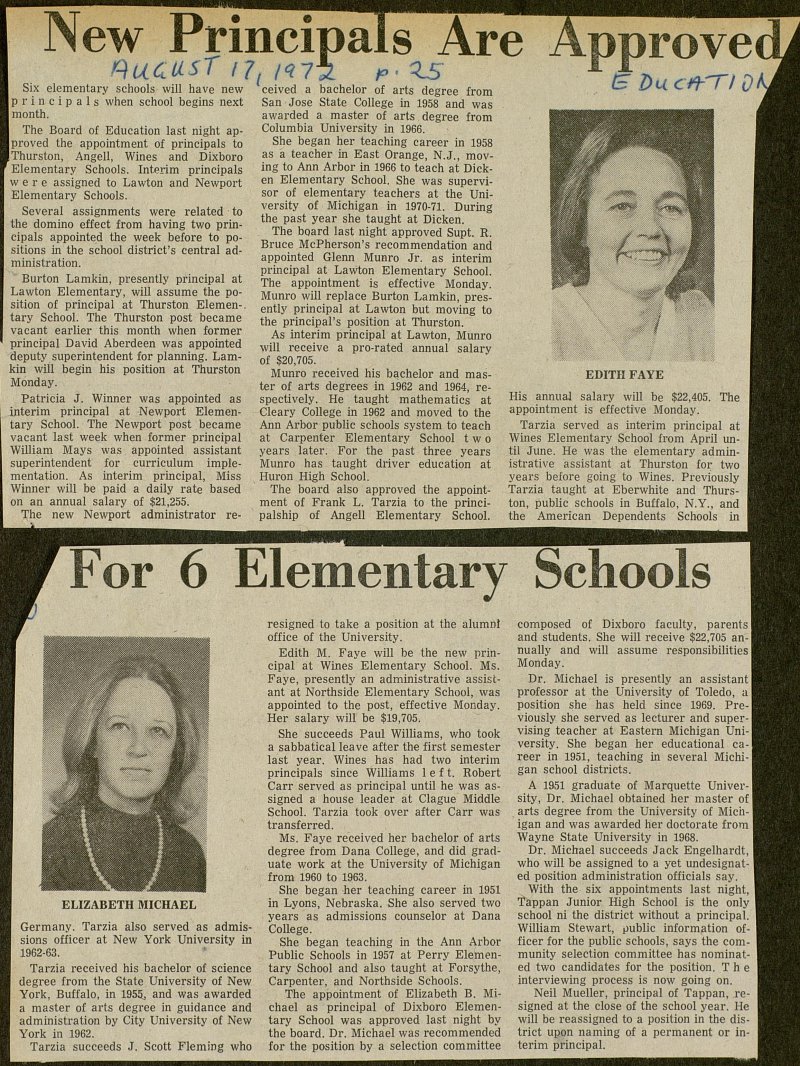 Six elementary schools will have new principáis when school begins next month. The Board of Education last night approved the appointment of principáis to Thurston, Angell, Wines and Dixboro Elementary Schools. Interim principáis were assigned to Lawton and Newport Elementary Schools. Several assignments were related to the domino effect from having two principáis appointed the week before to positions in the school district's central administration. Burton Lamkin, presently principal at Lawton Elementary, will assume the position of principal at Thurston Elementary School. The Thurston post became vacant earlier this month when former principal David Aberdeen was appointed deputy superintendent for planning. Lamkin will begin his position at Thurston Monday. Patricia J. Winner was appointed as interim principal at Newport Elementary School. The Newport post became vacant last week when former principal William Mays was appointed assistant superintendent for curriculum implementation. As interim principal, Miss Winner will be paid a daily rate based on an annual salary of $21,255. The new Newport administrator re ceived a bachelor of arts degree from San José State College in 1958 and was awarded a master of arts degree from Columbia University in 1966. She began her teaching career in 1958 as a teacher in East Orange, N.J., moving to Ann Arbor in 1966 to teach at Dicken Elementary School. She was supervisor of elementary teachers at the University of Michigan in 1970-71. During the past year she taught at Dicken. The board last night approved Supt. R. Bruce McPherson's recommendation and appointed Glenn Munro Jr. as interim principal at Lawton Elementary School. The appointment is effective Monday. Munro will replace Burton Lamkin, presently principal at Lawton but moving to the principal's position at Thurston. As interim principal at Lawton, Munro will receive a pro-rated annual salary of $20,705. Munro received his bachelor and master of arts degrees in 1962 and 1964, respectively. He taught mathematics at Cleary College in 1962 and moved to the Ann Arbor public schools system to teach at Carpenter Elementary School t w o years later. For the past three years Munro has taught driver education at Huron High School. The board also approved the appointment of Frank L. Tarzia to the principalship of Angelí Elementary School. His annual salary will be $22,405. The appointment is effective Monday. Tarzia served as interim principal at Wines Elementary School from April until June. He was the elementary administrative assistant at Thurston for two years before going to Wines. Previously I Tarzia taught at Eberwhite and I ton, public schools in Buffalo, N.Y., and I the American Dependents Schools in I ■ - Germany. Tarzia also served as admissions officer at New York University in 1962-63. Tarzia received his bachelor of science degree from the State University of New York, Buffalo, in 1955 and was awarded a master of arts degree in guidance and administration by City University of New York in 1962. Tarzia sueceeds J. Scott Fleming who resigned to take a position at the alumni office of the University. Edith M. Faye will be the new principal at Wines Elementary School. Ms. Faye, presently an administrative assistant at Northside Elementary School, was appointed to the post, effective Monday. Her salary will be $19,705. She succeeds Paul Williams, who took a sabbatical leave after the first semester last year. Wines has had two interim principáis since Williams 1 e f t. Robert Carr served as principal until he was assigned a house leader at Clague Middle School. Tarzia took over after Carr was transferred. Ms. Faye received her bachelor of arts degree from Dana College, and did gradúate work at the University of Michigan from 1960 to 1963. She began her teaching career in 1951 in Lyons, Nebraska. She also served two years as admissions counselor at Dana College. She began teaching in the Ann Arbor Public Schools in 1957 at Perry Elementary School and also taught at Forsythe, Carpenter, and Northside Schools. The appointment of Elizabeth B. Michael as principal of Dixboro Elementary School was approved last night by the board. Dr. Michael was recommended for the position by a selection committee composed of Dixboro faculty, parentsl and students. She will receive $22,705 an-l nually and will assume responsibilities I Monday. Dr. Michael is presently an assistantl professor at the University of Toledo, al position she has held since 1969. Pre-I viously she served as lecturer and 1 vising teacher at Eastern Michigan Uni-I versity. She began her educational ca-l reer in 1951, teaching in several Michi-I gan school districts. A 1951 gradúate of Marquette Univer-I sity, Dr. Michael obtained her raaster of I arts degree from the University of 1 igan and was awarded her doctórate from I Wayne State University in 1968. Dr. Michael succeeds Jack Engelhardt, I who will be assigned to a yet 1 ed position administration officials say. With the six appointments last night, Tappan Junior High School is the only school ni the district without a principal. William Stewart, public information officer for the public schools, says the community selection committee has nominated two candidates for the position. The interviewing process is now going on. Neil Mueller, principal of Tappan, resigned at the close of the school year. He will be reassigned to a position in the district upon naming of a permanent or interim principal.