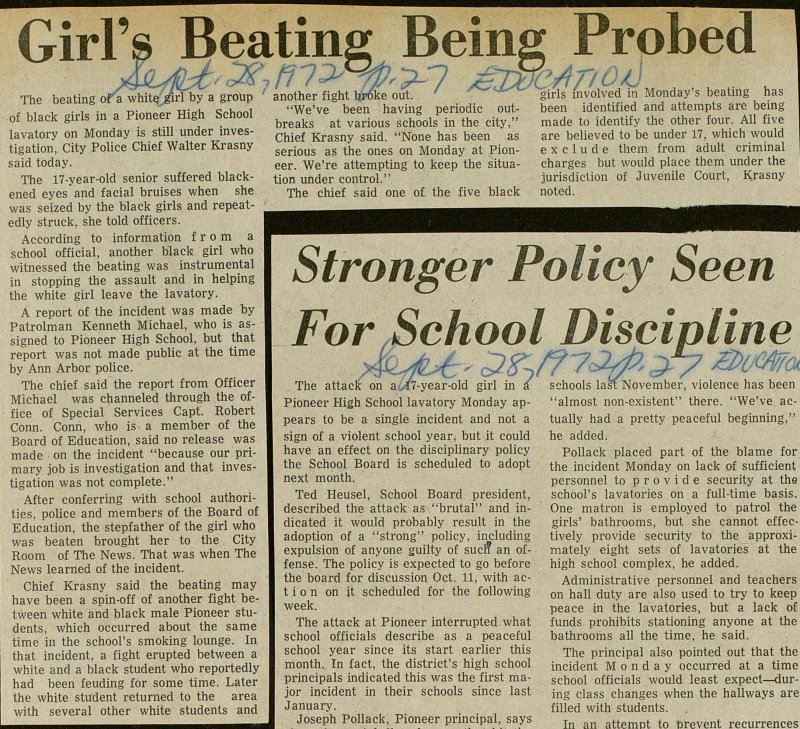 The beating of a white girl by a group of black girls in a Pioneer High School lavatory on Monday is still under investigation, City Pólice Chief Walter Krasny said today. The 17-year-old senior suffered blackened eyes and facial bruises when she was seized by the black girls and repeatedly struck, she told officers. According to information f r o m a school official, another black girl who witnessed the beating was instrumental in stopping the assault and in helping the white girl leave the lavatory. A report of the incident was made by Patrolman Kenneth Michael, who is assigned to Pioneer High School, but that report was not made public at the time by Ann Arbor pólice. The chief said the report from Officer Michael was channeled through the office of Special Services Capt. Robert Conn. Conn, who is a member of the Board of Education, said no release was made on the incident "because our primary job is investigation and that investigation was not complete." After conferring with school authorities, pólice and members of the Board of Education, the stepfather of the girl who was beaten brought her to the City Room of The News. That was when The News learned of the incident. Chief Krasny said the beating may have been a spin-off of another fight between white and black male Pioneer students, which occurred about the same time in the school's smoking lounge. In that incident, a fight erupted between a white and a black student who reportedly had been feuding for some time. Later the white student returned to the area with several other white students and another fight bjke out. ' "We've been having periodic outbreaks at various schools in the city," Chief Krasny said. "None has been as serious as the ones on Monday at Pioneer. We're attempting to keep the situation under control.". The chief said one of the five black girls ííivolved in Monday's beating has been identified and atterapts are being made to identify the other four. All five are believed to be under 17, which would e x c 1 u d e them from adult criminal charges but would place them under the jurisdiction of Juvénile Court, Krasny noted.