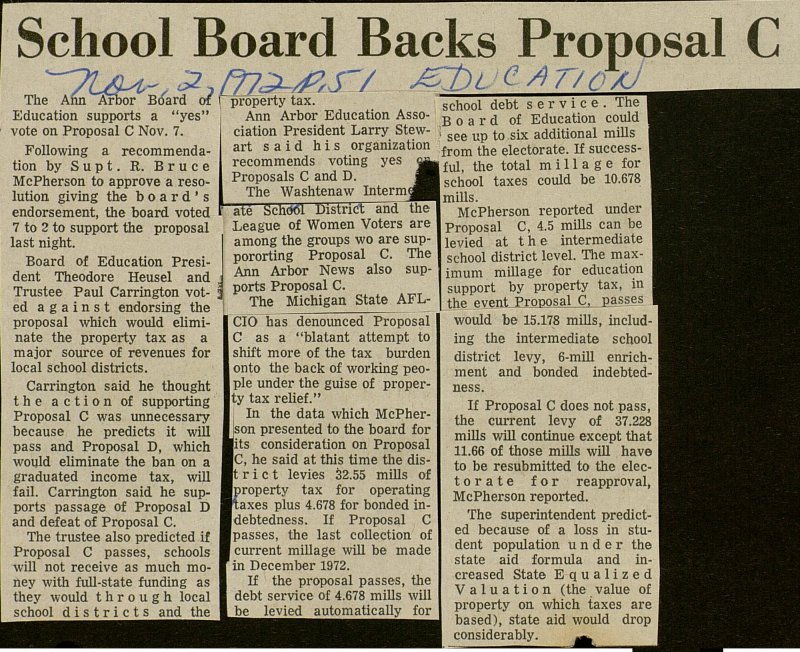 The Ann Arbor Board of Education supports a "yes" vote on Proposal C Nov. 7. Following a recommendation by Supt. R. Bruce McPherson to approve a resolution giving the board's endorsement, the board voted 7 to 2 to support the proposal last night. Board of Education President Theodore Heusel and Trustee Paul Carrington voted against endorsing the proposal which would elimínate the property tax as a major source of revenues for local school districts. Carrington said he thought the action of supporting Proposal C was unnecessary because he predicts it wiñ pass and Proposal D, which would elimínate the ban on a graduated income tax, will fail. Carrington said he supports passage of Proposal D and defeat of Proposal C. The trustee also predicted if Proposal C passes, schools will not receive as much money with full-state funding as they would through local school d i s t r i c t s and the property tax. Ann Arbor Education Association President Larry Stewart said his organization recommends voting yes Proposals C and D. fl The Washtenaw Intermediate School District and the League of Women Voters are among the groups wo are suppororting Proposal C. The Ann Arbor News also supports Proposal C. The Michigan State CIO has denounced Proposal C as a "blatant attempt to shift more of the tax burden onto the back of working peopie under the guise of propery tax relief." In the data which McPherson presented to the board for its consideraüon on Proposal C, he said at this time the dist r i c t levies 32.55 milis of property tax for operating taxes plus 4.678 for bonded indebtedness. If Proposal C passes, the last collection of current millage will be made in December 1972. If the proposal passes, the debt service of 4.678 milis will be levied automatically for school debt service. The Board of Education could I I see up to six additional milis from the electorate. If I ful, the total m i 1 1 a g e for I school taxes could be 10.678 I milis. McPherson reported under I Proposal C, 4.5 milis can be levied at the intermedíate I school district level. The maximum millage for education support by property tax, in I the pvent Proposal C, passes would be 15.178 milis, including the intermedíate school district levy, 6-mill enrichment and bonded indebtedness. If Proposal C does not pass, the current levy of 37.228 milis will continue except that 11.66 of those milis will have to be resubmitted to the electorate for reapproval, McPherson reported. The superintendent predicted because of a loss in student population under the state aid formula and increased State Equalized Valuation (the value of property on which taxes are based), state aid would drop considerably.