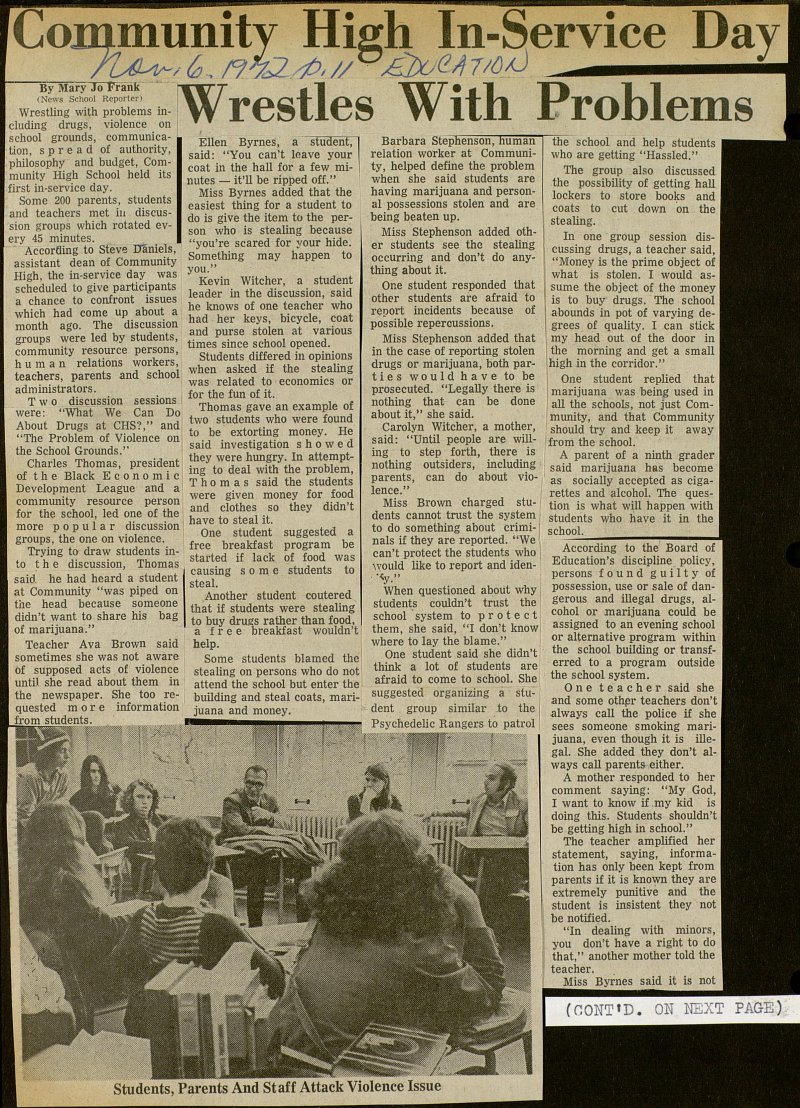 Wrestling with problems including drugs, violence on school grounds, communication, spread of authority, philosophy and budget, Community High School held its first in-service day. Some 200 parents, students and teachers met in discussion groups which rotated every 45 minutes. AccorQing to Steve Daniels, assistant dean of Community High, the in-service day was scheduled to give participants a chance to confront issues which had come up about a month ago. The discussion groups were led by students, community resource persons, human relations workers, teachers, parents and school administrators. T w o discussion sessions were: "What We Can Do About Drugs at CHS?," and "The Problem of Violence on the School Grounds." Charles Thomas, president of t h e Black Economie Development League and a community resource person for the school, led one of the more popular discussion groups, the one on violence. Trying to draw students into the discussion, Thomas said he had heard a student at Community "was piped on the head because someone didn't want to share his bag of marijuana." Teacher Ava Brown said sometimes she was not aware of supposed acts of violence untü she read about them in the newspaper. She too reI quested more information Ifrom students. Ellen Byrnes, a "student, said: "You can't leave your coat in the hall for a few minutes - it'll be ripped off." Miss Byrnes added that the easiest thing for a student to do is give the item to the person who is stealing because "you're scared for your hide. Something may happen to you." Kevin Witcher, a student leader in the discussion, said he knows of one teacher who had her keys, bicycle, coat and purse stolen at various times since school opened. Students differed in opinions when asked if the stealing was related to economics or for the fun of it. Thomas gave an example of two students who were found to be extorting money. He said investigation s h o w e d they were hungry. In attempting to deal with the problem, Thomas said the students were given money for food and clothes so they didn't have to steal it. One student suggested a free breakfast program be started if lack of food was causing s o m e students to steal. Another student coutered that if students were stealing to buy drues rather than food, a free breakfast wouldn't help. Some students blamed the stealing on persons who do not attend the school but enter the building and steal coats, marijuana and money. Barbara Stephenson, human relation worker at Community, helped define the problem when she said students are having marijuana and personal possessions stolen and are being beaten up. Miss Stephenson added other students see the stealing occurring and don't do anything about it. One student responded that other students are afraid to report incidents because of possible repercussions. Miss Stephenson added that in the case of reporting stolen drugs or marijuana, both parties wouldhave to be prosecuted. "Legally there is nothing that can be done about it," she said. Carolyn Witcher, a mother, said: "Until people are willing to step forth, there is nothing outsiders, including parents, can do about violence." Miss Brown charged students cannot trust the system to do something about crimi- nals if they are reported. "We can't protect the students who would like to report and idenWhen questioned about why students couldn't trust the school 'system to protect them, she said, "I don't know where to lay the blame." One student said she didn't think a lot of students are afraid to come to school. She suggested organizing a student group similar io the Psychedelic Rangers to patrol the school and help students who are getting "Hassled." The group also discussed the possibility of getting hall lockers to store books and coats to cut down on the stealing. In one gröup session discussing drugs, a teacher said, "Money is the prime object of what is stolen. I would assume the object of the money is to buy drugs. The school abounds in pot of varying degrees of quality. I can stick my head out of the door in the morning and get a small high in the corridor." One student replied that marijuana was being used in all the schools, not just Community, and that Community should try and keep it away from the school. A parent of a ninth grader said marijuana has become as socially accepted as cigarettes and alcohol. The question is what will happen with students who have it in the school. According to the Board of Education's discipline policy, persons found guilty of possession, use or sale of dangerous and illegal drugs, alcohol or marijuana could be assigned to an evening school or alternative program within the school building or transferred to a program outside the school system. One teacher said she and some other teachers don't always cali the pólice if she sees someone smoking marijuana, even though it is illegal. She added they don't always cali parents either. A mother responded to her comment saying: "My God, I want to know if my kid is doing this. Students shouldn't be getting high in school." The teacher amplified her statement, saying, information has only been kept from parents if it is known they are extremely punitive and the student is insistent they not be notified. "In dealing with minors, you don't have a right to do that," another mother told the teacher. Miss Byrnes said it is not (HONT'D. ON NEXT PAGE).