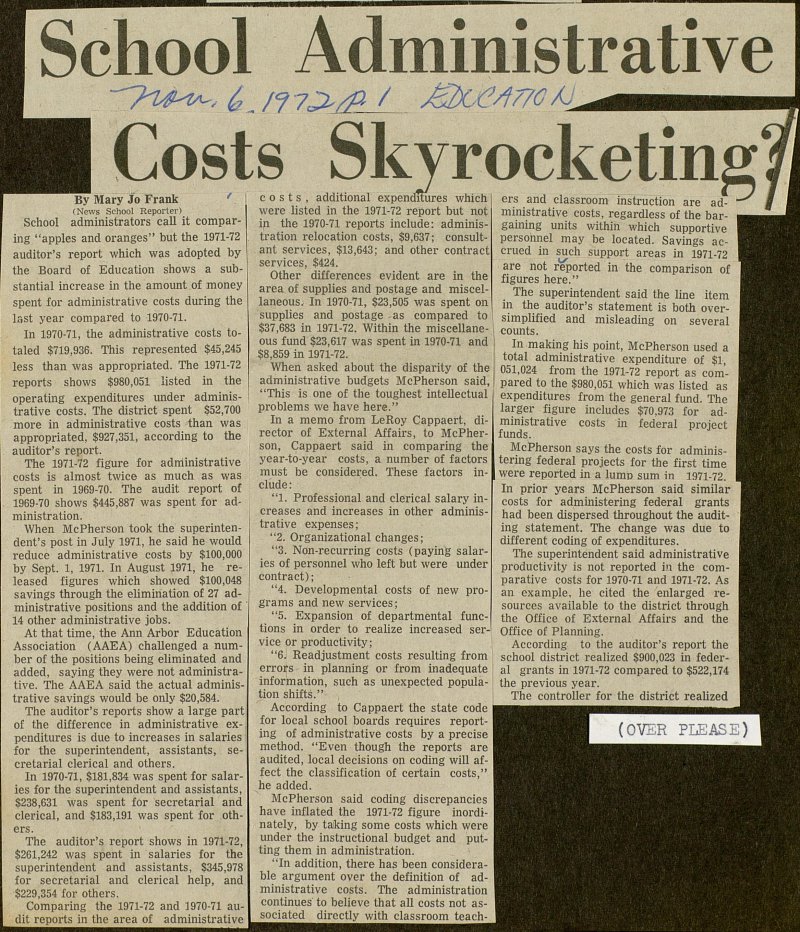 School administrators cali it comparing "apples and oranges" but the 1971-72 auditor's report which was adopted by the Board of Education shows a substantial increase in the amount of money spent for administrative costs during the last year compared to 1970-71. In 1970-71, the administrative costs tótaled $719,936. This represented $45,245 less than was appropriated. The 1971-72 reports shows $980,051 listed in the operating expenditures under administrative costs. The district spent $52,700 more in administrative costs than was appropriated, $927,351, according to the auditor's report. The 1971-72 figure for administrative costs is almost twice as much as was spent in 1969-70. The audit report of 1969-70 shows $445,887 was spent for administration. When McPherson took the superintendent's post in July 1971, he said he would reduce administrative costs by $100,000 by Sept. 1, 1971. In August 1971, he released figures which showed $100,048 savings through the elimination of 27 administrative positions and the addition of 14 other administrative jobs. At that time, the Ann Arbor Education Association (AAEA) challenged a number of the positions being eliminated and added, saying they were not administrative. The AAEA said the actual administrative savings would be only $20,584. The auditor's reports show a large part of the difference in administrative expenditures is due to increases in salaries for the superintendent, assistants, secretarial clerical and others. In 1970-71, $181,834 was spent for salaries for the superintendent and assistants, $238,631 was spent for secretarial and clerical, and $183,191 was spent for others. The auditor's report shows in 1971-72, $261,242 was spent in salaries for the superintendent and assistants, $345,978 for secretarial and clerical help, and $229,354 for others. Comparing the 1971-72 and 1970-71 audit reports in the area of administrative c o s t s , additional expendiíúres which were listed in the 1971-72 report but not lp the 1970-71 reports include: administration relocation costs, $9,637; consultant services, $13,643; and other contract services, $424. Other differences evident are in the area of supplies and postage and miscellaneous. In 1970-71, $23,505 was spent on supplies and postage -as compared to $37,683 in 1971-72. Within the miscellaneous fund $23,617 was spent in 1970-71 and $8,859 in 1971-72. When asked about the disparity of the administrative budgets McPherson said, "This is one of the toughest intellectual problems we have here." In a memo from LeRoy Cappaert, director of External Affairs, to McPherson, Cappaert said in comparing the year-tó-year costs, a number of factors must be considered. These factors include : "1. Professional and clerical salary increases and increases in other administrative expenses; "2. Organizational changes; "3. Non-reeurring costs (paying salaries of personnel who left but were under contract) ; "4. Developmental costs of new programs and new services; "5. Expansión of departmental functions in order to realize increased service or productivity ; "6. Readjustment costs resulting from crrors in planning or from inadequate information, such as unexpected population shifts." . According to Cappaert the state code for local school boards requires reporting of administrative costs by a precise method. "Even though the reports are audited, local decisions on coding will affect the classification of certain costs," he added. McPherson said coding discrepancies have inflated the 1971-72 figure inordinately, by taking some costs which were under the instructional budget and putting them in administration. "In addition, there has been considerable argument over the definition of administrative costs. The administration continúes to believe that all costs not associated directly with classroom ers and classroom instruction are administrative costs, regardless of the bargaining units within which supportive personnel may be located. Savings accrued in such support areas in 1971-72 are not reported in the comparison of figures here." The superintendent said the line item in the auditor's statement is both oversimplified and misleading on several counts. In. making his point, McPherson used a total administrative expenditure of $1, 051,024 from the 1971-72 report as compared to the $980,051 which was listed as expenditures from the general fund. The larger figure includes $70,973 for administrative costs in federal project funds. McPherson says the costs for administenng federal projects for the first time were reported in a lump sum in 1971-72. In prior years McPherson said similar costs for administering federal grants had been dispersed throughout the auditing statement. The change was due to different coding of expenditures. The superintendent said administrative productivity is not reported in the comparative costs for 1970-71 and 1971-72. As an example, he cited the enlarged resources available to the district through the Office of External Affairs and the Office of Planning. According to the auditor's report the school district realized $900,023 in federal grants in 1971-72 compared to $522,174 the previous year. The controller for the district realized for the district $47,000 in interest on investment dollars beyond what was anticipated in 1971-72. Interest on investments totaled $207,172 in 1971-72 compared to $265,552 in 1970-71. McPherson said because of the persisting problems related to the identification, monitoring and reporting of administrative costs on an annual basis, he has asked the controller, with the assistance of central administrators, to report to the superintendent and board by March 1, with a revised and thorough comparison of 1970-71 and 197-72 administrative costs, as well as a program for reporting comparative costs at the conclusión of the 1972-73 school year which will represent an improvement over the present process. Although the Board of Education did not discuss the auditor's report last Wednesday night, McPherson cited two other aspects of the financial statement for 1971-72 from the auditors Icerman, Johnson and Hoffman of Ann Arbor. McPherson said the report shows the school district moved from a deficit on June 30, 1971, of $64,369 to a cash balance of $78,935 on June 30, 1972, or improved its position by $143,304. "While numerous school districts in the State of Michigan have moved into deficit posture, that trend has been ersed in the Ann Arbor Public Schools," McPherson said. He added the expenditures for capital program services were reduced by $21, 500 in the 1971-72 school year and increased by $267,544 in consulting services from the capital budget through the use of interest monies. "Interest monies in the 1966 bond issue account were put to work where school district needs are greatest," McPherson said, "without draining the operating budget." The two firms who are doing consulting are Advanced Planning Research Group of Kensington, Md., and Urban Design Associates of Pittsburgh, Pa.