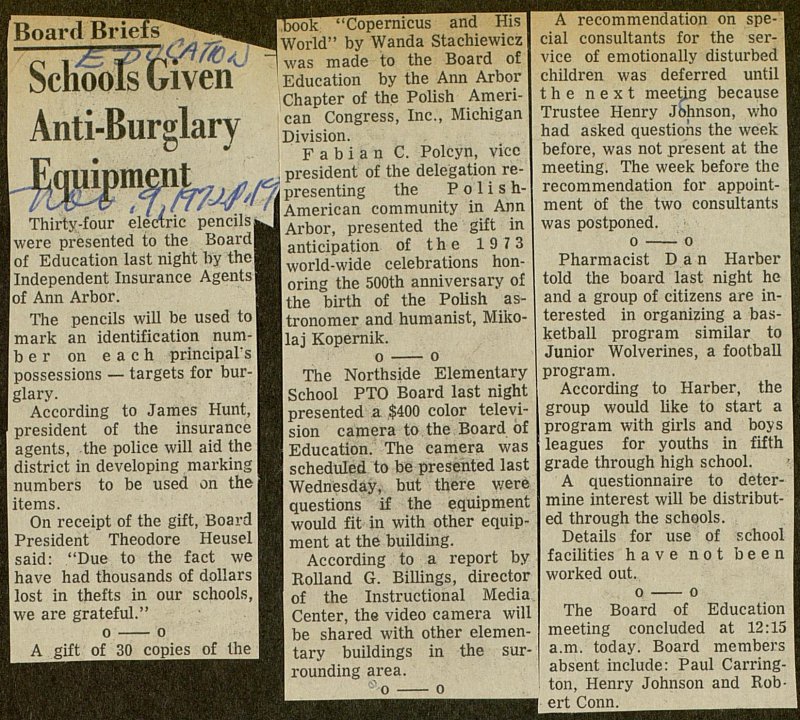 Thirty-four elecxric pencilsj were presented to the Board of Education last night b'y thcj Independent Insurance Agents of Ann Arbor. The pencils will be used to mark an identification number on each principáis possessions - targets for burglary. According to James Hunt, president of the insurance agents, the pólice will aid the district in developing marking numbers to be used on the items. On receipt of the gift, Board President Theodore Heusel said: "Due to the fact we have had thousands of dollars lost in thefts in our schools, we are grateful." o o A gift of 30 copies of the book "Copernicus and His World" by Wanda Stachiewicz was made to the Board of Education by the Ann Arbor Chapter of the Polish American Congress, Inc., Michigan División. Fabián C. Polcyn, vicc president of the delegation representing the PolishAmerican community in Ann Arbor, presented the gift in anticipation of the 1973 world-wide celebrations honoring the 500th anniversary of the birth of the Polish astronomer and humanist, Mikolaj Kopernik. o o The Northside Elementary School PTO Board last night presented a $400 color televisión camera to the Board öf Education. The camera was scheduled to be presented lasi Wednesdáy, but there vere questions if the equipment would fit in with other equipment at the building. According to a report by Rolland G. Billings, director of the Instructional Media Center, the video camera wil be shared with other elemen tary buildings in the sur rounding area. 'o o A recommendation on 1 cial consultants for the 1 vice of emotionally disturbed I children was deferred until I the n e x t meeting because I Trustee Henry Jbhnson, who had asked questiohs the week before, was not present at the meeting. The week before the recommendation for appointment öf the two consultants [ was postponed. o o Pharmacist Dan Harber told the board last night he and a group of citizens are interested in organizing a basketball program similar to Junior Wolverines, a football program. According to Harber, the group would like to start a program with girls and boys leagues for youths in fifth grade through high school. A questionnaire to determine interest will be distributed through the schools. Details for use of school facilities have not been worked out. o o The Board of Education meeting concluded at 12:15 a.m. today. Board members absent include: Paul Carrington, Henry Johnson and RobI ert Conn.