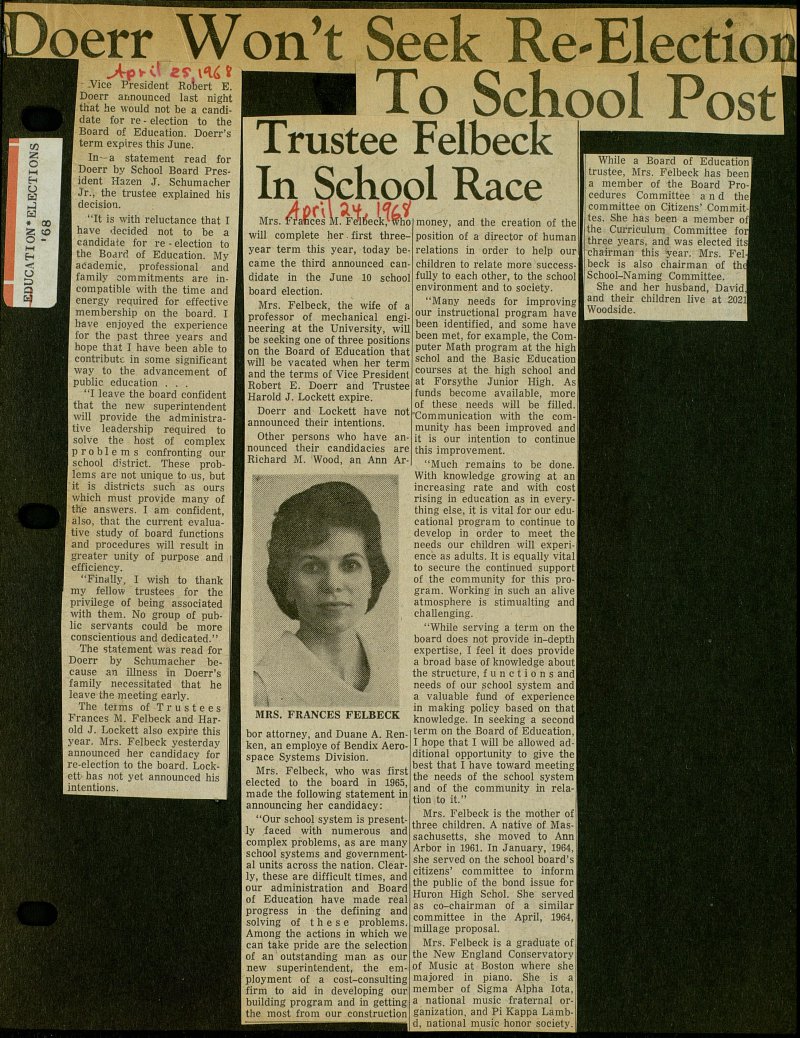 I Vice President Robert E. iDoerr announced last night I that he would not be a candidate for re - election to the Board of Education. Doerr's term expires this June. In- a statement read for Doerr by School Board President Hazen J. Schumacher Jr., the trustee explained his decisión. "It is with reluctance that I have decided not to be a candidate for re - election to the Board of Education. My academie, professional and family commitments are incompatible with the time and energy required for effective membership on the board. I have enjoyed the experience for the past three years and hope that I have been able to contributo in some significant way to the advancement of public education . . . "I leave the board confident that the new superintendent will provide the administrative leadership required to solve the host of complex problems confronting our school district. These problems are not unique to us, but ! it is districts such as ours which must provide many of the answers. I am confident, also, that the current evaluative study of board functions and procedures will result in greater unity of purpose and efficiency. "Finally, I wish to thank my fellow trustees for the privilege of being associated with them. No group of public servants could be more conscientious and dedicated." The statement was read for i Doerr by Schumacher because an illness in Doerr's family necessitated that he leave the meeting early. The terms of Trustees Francés M. Felbeck and Harold J. Lockett also expire this year. Mrs. Felbeck yesterday announced her candidacy for re-election to the board. Lockett has not yet announced his intentions. I Mrs. Frailees M. FeWeckJWho will complete her . first threeyear term this year, today became the third announced candidate in the June 10 school board election. Mrs. Felbeck, the wife of a professor of mechanical engineering at the University, will be seeking one of three positions on the Board of Education that will be vacated when her term and the terms of Vice President Robert E. Doerr and Trustee Harold J. Lockett expire. Doerr and Lockett have not announced their intentions. Other persons who have announced their candidacies are Richard M. Wood, an Ann bor attorney, and Duane A. Renken, an employé of Bendix Aerospace Systems División. Mrs. Felbeck, who was first elected to the board in 1965, made the following statement in announcing her candidacy: "Our school system is presently faced with numerous and complex problems, as are many school systems and governmental units across the nation. Clearly, these are difficult times, and our administration and Board of Education have made real progress in the defining and solving of these problems. Among the actions in which we can take pride are the selection of an outstanding man as our new superintendent, the employment of a cost-consulting firm to aid in developing our building program and in getting the most from our construction money, and the creation of the position of a director of human relations in order to help our children to relate more successfully to each other, to the school environment and to society. "Many needs for improving our instructional program have been identified, and some have been met, for example, the Computer Math program at the high schol and the Basic Education courses at the high school and] at Forsythe Junior High. Asl funds become available, morel of these needs will be filled. 'Communication with the community has been improved and it is our intention to continue this improvement. "Much remains to be done. With knowledge growing at an increasing rate and with costl rising in education as in every-l thing else, it is vital for our 1 cational program to continue tol develop in order to meet thej needs our children will experi-l ence as adults. It is equally vitall to secure the continued support I of the community for this pro-l gram. Working in such an alivel atmosphere is stimualting andl challenging. "While serving a term on thel board does not pro vide in-depthl expertise, I feel it does providel a broad base of knowledge aboutl the structure, functions andl needs of our school system andl a valuable fund of experiencel in making policy based on thatl knowledge. In seeking a secondl term on the Board of Education, I I hope that I will be allowed ad-I ditional opportunity to give thel best that I have toward meeting I the needs of the school system I and of the community in rela-I tion to it." ' Mrs. Felbeck is the mother of II three children. A native of 1 sachusetts, she moved to Ann II Arbor in 1961. In January, 1964, II she served on the school board' si citizens' committee to informl the public of the bond issue forl Huron High Schol. She served I as co-chairman of a similar II committee in the April, 1964,1 millage proposal. Mrs. Felbeck is a gradúate of I the New England Conservatory I of Music at Boston where she I majored in piano. She is al member of Sigma Alpha Iota, I a national music fraternal 1 ganization, and Pi Kappa 1 d, aational music honor society. I While a Board ofEducationJ trustee, Mrs. Felbeck has been a member of the Board Procedures Committee and thel committee on Citizens' Commit-I tes. She has been a member ofl the Curriculum Committee forl three years, and was elected itsl chairman this year. Mrs. Feil beek is also chairman of thei School-Naming Committee. She and her husband, DavidI and their children live at 202l Woodside. . I