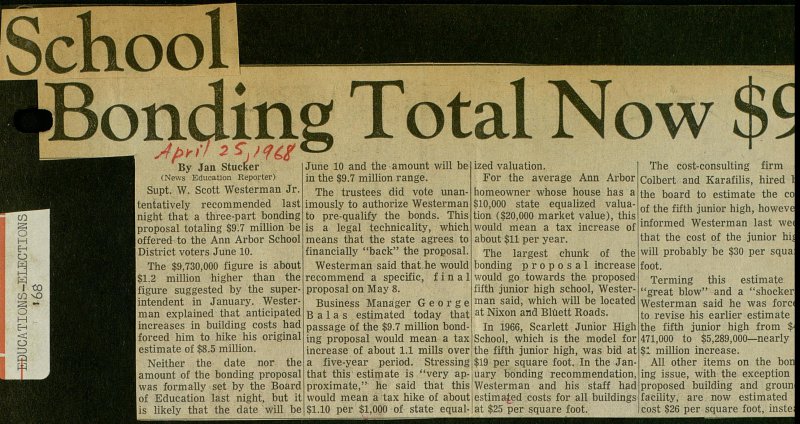 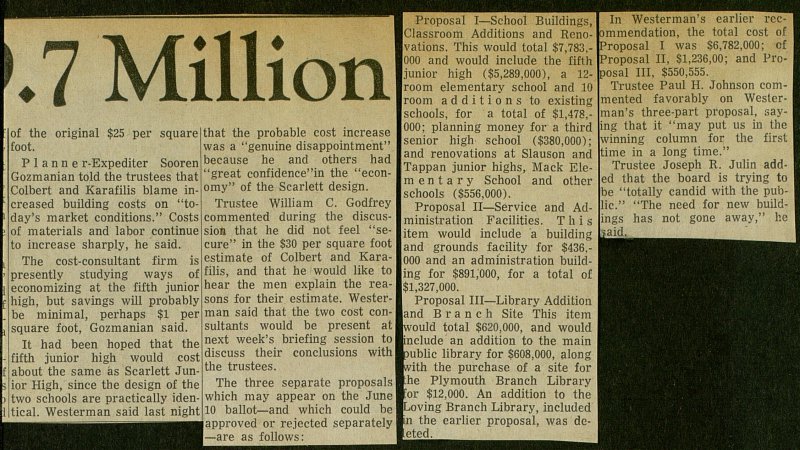 Supt. W. Scott Westerman Jr. tentatively recommended last night that a three-part bonding proposal totaling $9.7 million be offered to the Ann Arbor School District voters June 10. The $9,730,000 figure is about $1.2 million higher than the figure suggested by the superintendent in January. Westerman explained that anticipated increases in building costs had forced him to hike his original estímate of $8.5 million. Neither the date nor the amount of the bonding proposal was formally set by the Board of Education last night, but it is likely that the date will be June 10 and the amount will be in the $9.7 million range. The trustees did vote unanimously to authorize Westerman to pre-qualify the bonds. This is a legal technicality, which means that the state agrees to financially "back" the proposal. Westerman said that.he would recommend a specific, final proposal on May 8. Business Manager G e o r g e Balas estimated today that passage of the $9.7 million bonding proposal would mean a tax increase of about 1.1 milis over a five-year period. Stressing that this estímate is "very approximate," he said that this would mean a tax hike of about $1.10 per $1,000 of state ized valuation. For the average Ana Arbor homeowner whose house has a $10,000 state equalized valuation ($20,000 market valué), this would mean a tax increase of about $11 per year. The largest chunk of the bonding proposal increase would go towards the proposed fifth junior high school, Westerman said, which will be located at Nixon and Blüett Roads. In Í966, Scarlett Junior High School, which is the model for the fifth junior high, was bid at $19 per square foot. In the January bonding recommendation, Westerman and his staff had estimaLed costs for all buildings at $25 per square foot. The cost-consulting firm Colbert and Karafilis, hired the board to estímate the of the fifth junior high, howev( informed Westerman last we that the cost of the junior hi will probably be $30 per squa foot. Terming this estímate "great blow" and a "shockei Westerman said he was forc to revise his earlier estímate the fifth junior high from $ 471,000 to $5,289,000- nearly $1 million increase. All other items on the boi ing issue, with the exception proposed building and grouri facility, are now estimated cost $26 per square foot, inste of the original $25 per square foot. P 1 a n n e r-Expediter Sooren Gozmanian told the trustees that Colbert and Karafilis blame increased building costs on "today's market conditions." Costs of m ateríais and labor continue to increase sharply, he said. The cost-consultant firm is presently studying ways of economizing at the fifth junior high, but savings will probably be minimal, perhaps $1 per square foot, Gozmanian said. It had been hoped that the fifth junior high would cost about the same ás Scarlett Junior High, since the design of the two schools are practically identical. Westerman said last night that the probable cost increase was a "genuine disappointment" because he and others had "great confidence"in the "economy" of the Scarlett design. Trustee William C. Godfrey commented during the discussion that he did not feel "secure" in the $30 per square foot estímate of Colbert and Karafilis, and that he would like to hear the men explain the reasons for their estímate. Westerman said that the two cost consultants would be present at next week's briefing session to discuss their conclusions with the trustees. The three separate proposals which may appear on the June 10 ballot- and which could be approved or rejected separately - are as follows: Proposal I- School Buildings, Classroom Additions and Renovations. This would total $7,783,000 and would include the fifth junior high ($5,289,000), a 12room elementary school and 10 room additions to existing schools, for a total of $1,478,D00; planning money for a third senior high school ($380,000); and renovations at Slauson and Tappan junior highs, Mack Elem e n t a r y School and other schools ($556,000). Proposal II - Service and Administration Facilities. This item would include 'a building and grounds facility for $436,)00 and an administration building for $891,000, for a total of $1,327,000. Proposal III- Library Addition and B r a n c h Site This item I would total $620,000, and would include an addition to the main public library for $608,000, along with the purchase of a site for I ;he Plymouth Branch Library I 'or $12,000. An addition to the Loving Branch Library, included n the earlier proposal, was deeted. In Westerman's earlier recommendation, the total cost of Proposal I was $6,782,000; of Proposal II, $1,236,00; and Proposal III, $550,555. Trustee Paul H. Johnson commented favorably on Westerman's three-part proposal, saying that it "may put us in the winning column for the first time in a long time." Trustee Joseph R. Julin added that the board is trying to be "totally candid with the public." "The need for new buildings has not gone away," he said.