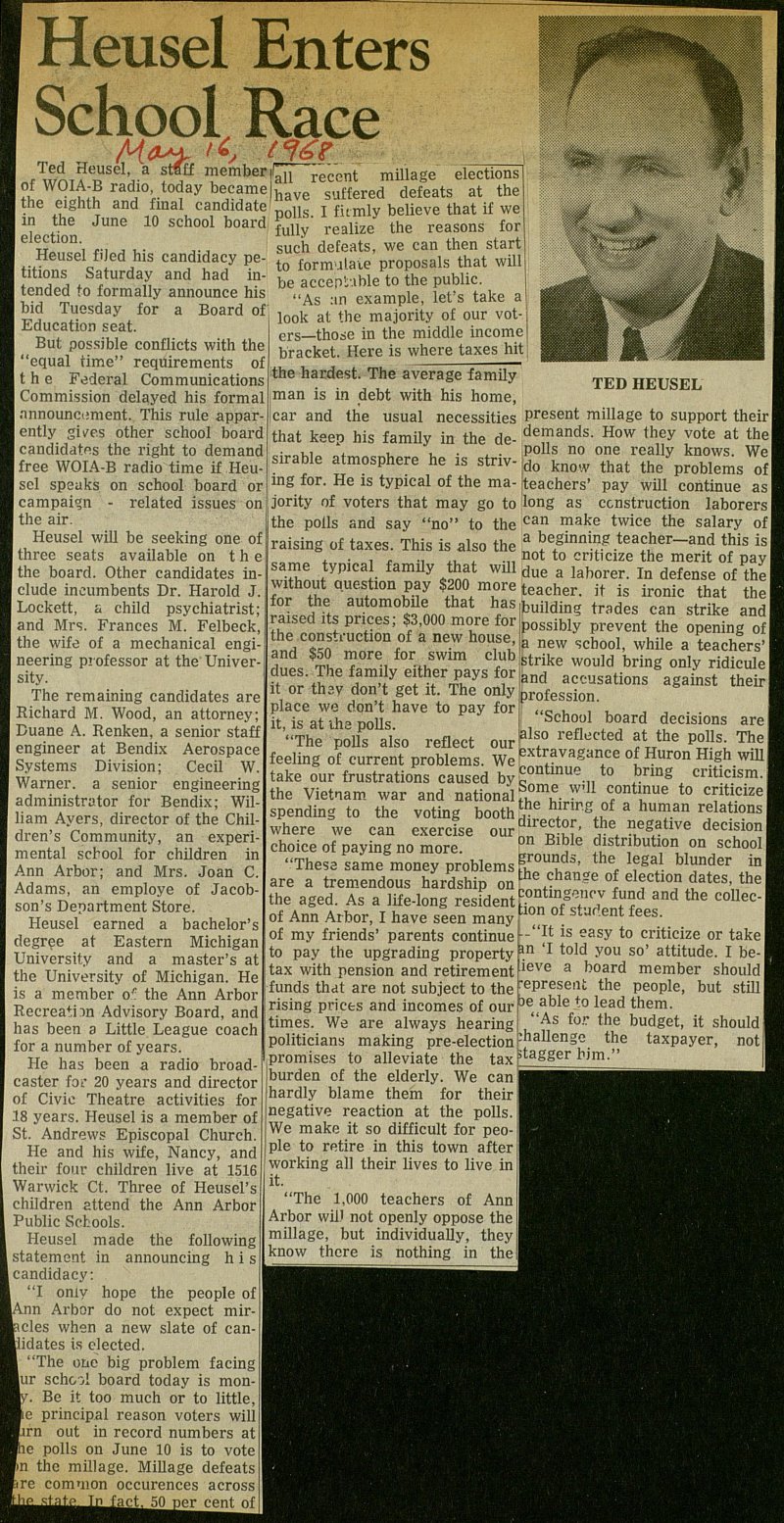 Ted Heusel, a stBff member I of WOIA-B radio, today became I the eighth and final candidate I in the June 10 school board I election. Heusel filed his candidacy peI titions Saturday and had inI tended to formally announce his I bid Tuesday for a Board of I Education seat. But possible conflicts with the I "equal time" reqilirements o I 1 h e Federal Communications I Commission delayed his formal announcement. This rule apparently gives other school board candidates the right to demand I free WOIA-B radio time if HeuI sel speaks on school board or lcampaign - related issues on I the air. Heusel will be seeking one of three seats available on the the board. Other candidates include ineumbents Dr. Harold J. Lockett, a child psychiatrist; and Mrs. Francés M. Felbeck, the wife of a mechanical engineering professor at the University. The remaining candidates are Richard M. Wood, an attorney; Duane A. Jtenken, a senior staff engineer at Bendix Aerospace Systems División; Cecil W. Warner, a senior engineering administrator for Bendix; William Ayers, director of the Children's Community, an experimental school for children in Ann Arbor; and Mrs. Joan C. Adams, an employé of Jacobson's Department Store. Heusel earned a bachelor's degree at Eastern Michigan University and a master's at the University of Michigan. He is a member o' the Ann Arbor Recreatbn Advisory Board, and has been a Little League coach for a number of years. He has been a radio broadcaster for 20 years and director of Civic Theatre activities for 18 years. Heusel is a member of St. Andrew's Episcopal Church. He and his wife, Nancy, and their four children live at 1516 Warwick Ct. Three of Heusel's children attend the Ann Arbor Public Schools. Heusel made the following statement in announcing h i s candidacy: , "I only hope the people of Ann Arbor do not expect when a new slate of candidates is elected. "The one big problem facing our school board today is [I m. Be it too much or to little, I principal reason voters will I turn out in record numbers at I Ihe polls on June 10 is to vote I In the miliage. Millage defeat across recent millage elections have suffered defeats at the polls. I fitmly believe that if we fully realize the reasons for such defeats, we can then start to formulate proposals that will be acceptable to the public. "As an example, let's take a look at the majority of our voters- thoise in the middle income bracket. Here is where taxes hit the hardest. The average family man is in debt with his home, car and the usual necessities that keep his family in the desirable atmosphere he is 1 ing for. He is typical of the majority of voters that may go to the polls and say "no" to the raising of taxes. This is also the same typical family that will j without question pay $200 more for the automobile that has raised its prices; $3,000 more for the construction of a new house, and $50 more for swim club dues. The family either pays for it or thay don't get it. The only place we don't have to pay for it, is at the polls. "The polls also reflect our feeling of current problems. We' take our frustrations caused by the Vietnam war and national spending to the voting booth where we can exercise our choice of paying no more. "Thesa same money problems [ are a tremendous hardship on the aged. As a life-long resident [ of Ann Arbor, I have seen many of my friends' parents continue ■ ;o pay the upgrading property 3 :ax with pension and retirement funds that are not subject to the ' rising prices and incomes of our '■ times. We are always hearing politicians making pre-election : promises to alleviate the tax burden of the elderly. We can hardly blame them for their negative reaction at the polls. II We make it so difficult for II pie to retire in this town after 1 working all their lives to live in I it. "The 1,000 teachers of Ann Arbor will not openly oppose the millage, but individually, they know there is nothing in the present millage to support their demands. How they vote at the ;polls no one really knows. We ■do know that the problems of teachers' pay will continue as long as construction laborers can make twice the salary of I a beginning teacher- and this is I not to criticize the merit of payl due a laborer. In def ense of the I teacher, it is ironic that the building trades can strike and possibly prevent the opening of I a new school, while a teachers' I strike would bring only ridicule I and accusations against their I profession. "School board decisions arel also reflected at the polls. The extravagance of Huron High will I continue to bring criticism.l Some w'll continue to criticize I the hiring of a human relations I director, the negative decision on Bible distribution on school grounds, the legal blunder in the change of election dates, the contingency fund and the 1 tion of student f ees. --"It is easy to criticize or takel m 'I told you so' attitude. I be-l ieve a board member should represent the people, but still be able to lead them. "As for the budget, it should challenge the taxpayer, not stagger him."