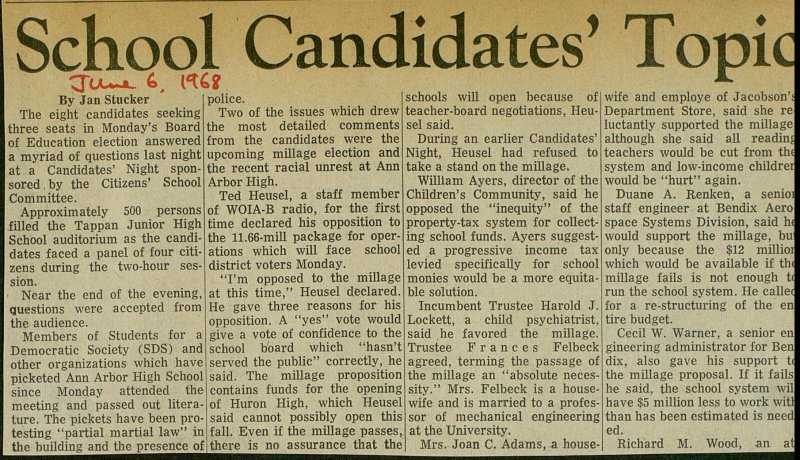 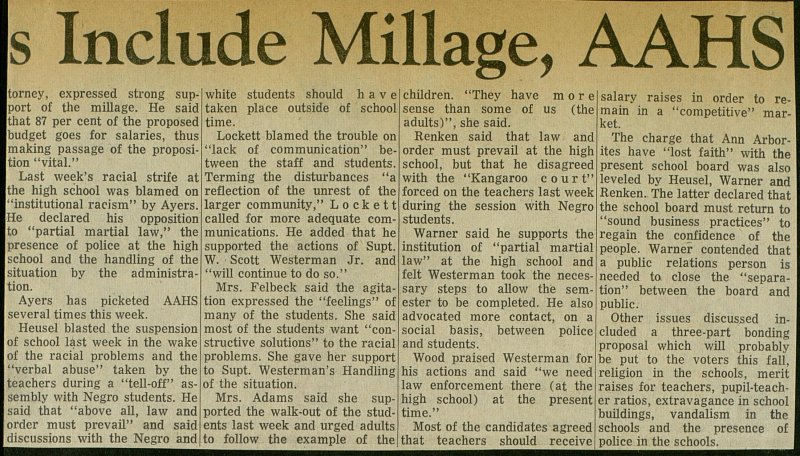 The eight candidates seeking three seats in Monday's Board of Education election answered a myriad of questions last night at a Candidates' Night sponsored.by the Citizens' School Committee. Approximately 500 persons filled the Tappan Junior High School auditorium as the candidates faced a panel of four citizens during the two-hour session. Near the end of the evening, questions were accepted from the audience. Members of Students for a Democratie Society (SDS) and other organizations which have picketed Ann Arbor High School since Monday attended the meeting and passed out literature. The pickets have been protesting "partial martial law" in the building and the presence oi pólice. Two of the issues which drew the most detailed comments from the candidates were the upcoming millage election and the recent racial unrest at Ann Arbor High. Ted Heusel, a staff member of WOIA-B radio, for the first time declared nis opposition to the 11.66-mill package for operations which will face school district voters Monday. "I'm opposed to the millage at this time," Heusel declared. He gave three reasons for his opposition. A "yes" vote would give a vote of confidence to the school board which "hasn't served the public" correctly, he said. The millage proposition contains funds for the opening of Huron High, which Heusel said cannot possibly open this f all. Even if the millage passes, there is no assurance that the schools will open because of teacher-board negotiations, Heusel said. During an earlier Candidates' Night, Heusel had refused to take a stand on the millage, Willlam Ayers, director of the Children's Community, said he opposed the "inequity" of the property-tax system for collecting school funds. Ayers suggested a progressive income tax levied specifically for school monies would be a more equitable solution. Incumbent Trustee Harold J. Lockett, a child psychiatrist, said he favored the millage. Trustee Francés Felbeck agreed, terming the passage of the millage an "absolute necessity." Mrs. Felbeck is a housewife and is married to a professor of mechanical engineering at the University. Mrs. Joan C. Adams, a wife and employé of Jacobson'i Department Store, said she re luctantly supported the millage although she said all readini teachers would be cut from thi system and low-income childrei would be "hurt" again. Duane A. Renken, a senio: staff engineer at Bendix Aero space Systems División, said b would support the millage, bu only because the $12 millioi which would be available if th millage fails is not enough t run the school system. He callei for a re-structuring of the en tire budget. Cecil W. Warner, a senior en gineering administrator for Ben dix, also gave his support t the millage proposal. If it fails he said, the school system wil have $5 million less to work wit! than has been estimated is need ed. Richard M. Wood, an al torney, expressed strong support of the millage. He said that 87 per cent of the propösed budget goes for salaries, thus making passage of the proposition "vital." Last week's racial strife at the high school was blamed on "institutional racism" by Ayers. He declared his opposition to "partial martial law," the presence of pólice at the high school and the handling of the situation by the administration. Ayers has picketed AAHS several times this week. Heusel blasted the suspension of school last week in the wake of the racial problems and the "verbal abuse" taken by the teachers during a "tell-off" assembly with Negro students. He said that "above all, law and order must prevail" and said discussions with the Negro and white students should have taken place outside of school time. Lockett blamed the trouble on "lack of communication" between the staf f and students. Terming the disturbances "a reflection of the unrest of the larger community," Lockett called for more adequate communications. He added that he supported the actions of Supt. W. ■ Scott Westerman Jr. and "will continue to do so." Mrs. Felbeck said the agitation expressed the "feelings" of many of the students. She said most of the students want "constructive solutions" to the racial problems. She gave her support to Supt. Westerman's Handling of the situation. Mrs. Adams said she supported the walk-out of the students last week and urged adults to follow the example of the children. "They have more sense than some of us (the adults)", she said. Renken said that law and order must prevail at the high school, but that he disagreed with the "Kangaroo court" forced on the teachers last week during the session with Negro students. Warner said he supports the institution of "partial martial law" at the high school and feit Westerman took the necessary steps to allow the semester to be completed. He also advocated more contact, on a social basis, between pólice and students. Wood praised Westerman for his actions and said "we need law enforcement there (at the high school) at the present time." Most of the candidates agreed that teachers should receive salary raises in order to remain in a "competitive" market. The charge that Ann Arborites have "lost faith" with the present school board was also leveled by Heusel, Warner and Renken. The latter declared that the school board must return to "sound business practices" to regain the confidence of the people. Warner contended that a public relations person is needed ta close the "separation" between the board and public. Other issues discussed included a three-part bonding proposal which will probably be put to the voters this fall, religión in the schools, merit raises for teachers, pupil-teacher ratios, extravagance in school buildings, vandalism in the schools and the presence of pólice in the schools.