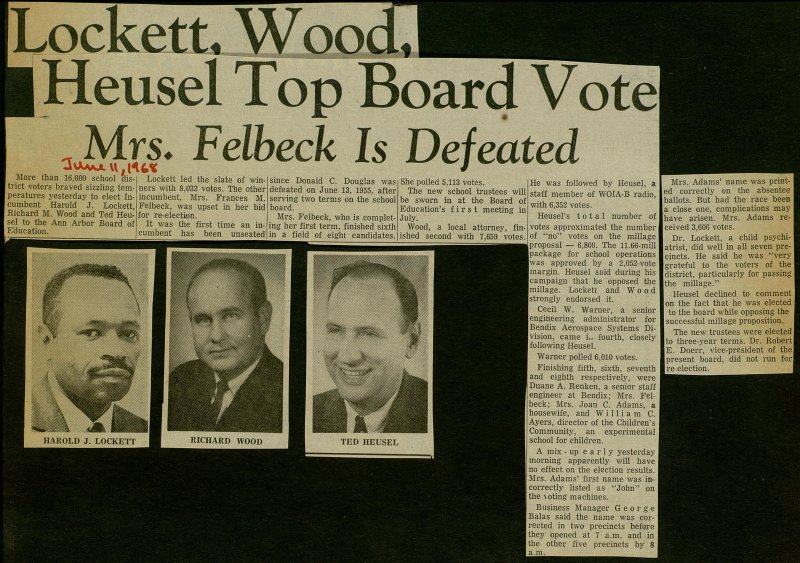 More than 16,000 school SisI trict voters braved sizzling temperatures yesterday to elect Incumbent Harold J. Lockett, Richard M. Wood and Ted Heusel to the Ann Arbor Board of Education. Lockett led the slate of winners witli 8.032 votes. The other ihcumbent, Mrs. Francés M. Felbeck, was upset in her bid for re-election. It was the first time an incumbent has been unseated since Donald C. Douglas was defeated on June 13, 1955, after serving two terms on the school board. Mrs. Felbeck, who is completing her first term, finished sixth in a field of eight candidates. She polled 5,113 votes. The new school trustees will be sworn in at the Board of Education's f i r s t meeting in July. Wood, a local attorney, finished second with 7,659 votes. He was followed by Heusel, a staff member of WOIA-B radio, with 6,352 votes. Heusel's total number of votes approximated the number of "no" votes on the millage proposal - 6,800. The 11.66-mill package for school operations was approved by a 2,052-vote margin. Heusel said during his campaign that he opposed the millage. Lockett and W o o d strongly endorsed it. Cecil W. Warner, a senior engineering administrator for Bendix Aerospace Systems División, carne L. fourth, closely i following Heusel. Warner polled 6,010 votes. Finishing fifth, sixth, seventh and eighth respectively, were Duane A. Renken, a senior staff engineer at Bendix; Mrs. Felbeek; Mrs. Joan C. Adams, a housewife, and W i 1 1 i a m C. Ayers, director of the Children's Community, an experimental school for children. A mix - up e a r 1 y yesterday morning apparently will have no effect on the election results. Mrs. Adams' first name was incorrectly listed as "John" on the oting machines. Business Manager George Balas said the name was corrected in two precincts before they opened at 7 a.m. and in the other five precincts by 8 a.m. 1 Mrs. Adams' name was printed correctly on the absentee oallots. But had the race been a close one, complications may ïave arisen. Mrs. Adams received 3,606 votes. Dr. Lockett, a child psychiatrist, did well in all seven precincts. He said he was "very grateful to the voters of the district, particularly for passing the millage." Heusel declined to comment j on the fact that he was elected to the board while opposing the successful millage proposition. The new trustees were elected to three-year terms. Dr. Robert E. Doerr, vice-president of the] present board, did not run forj reelection.