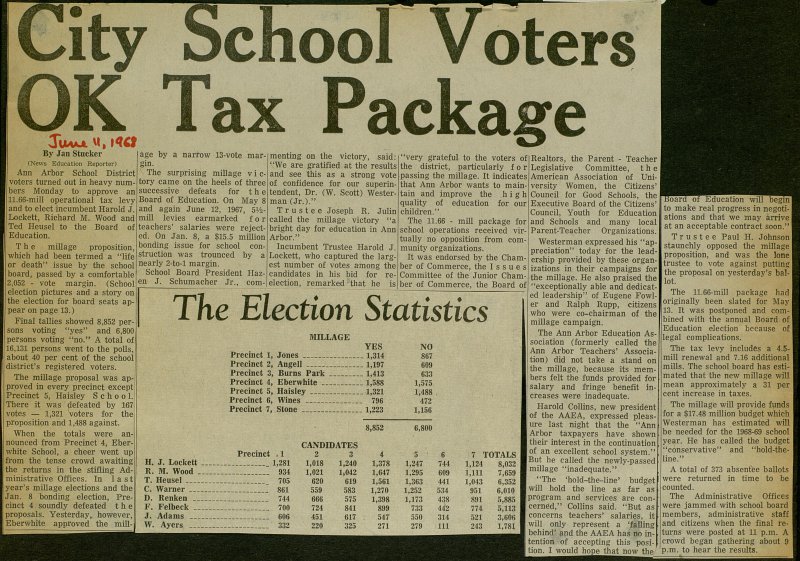 Ann Arbor School Distric: voters turned out in heavy numbers Monday to approve an 11.66-mill operational tax levy and to elect incumbent Harold J. Lockett, Richard M. Wood and Ted Heusel to the Board of Education. The millage proposition, which had been termed a "life or death" issue by the school board, passed by a comfortable 2,052 - vote margin. (School election pictures and a story on the election for board seats appear on page 13.) Final tallies showed 8,852 persons voting "yes" and 6,800 persons voting "no." A total of 16,131 persons went to the polls, about 40 per cent of the school district's registered voters. The millage proposal was approved in every precinct except Precinct 5, Haisley School. There it was defeated by 167 votes - 1,321 voters for the proposition and 1,488 against. When the totals were announced from Precinct 4, Eberwhite School, a cheer went up from the tense crowd awaiting the returns in the stifling Administrative Offices. In last year's millage elections and the Jan. 8 bonding election, Precinct 4 soundly defeated the proposals. Yesterday, however, Eberwhite approved the age by a narrow 13-vote margin. The surprising millage v i ctory carne on the heels of three successive defeats for the Board of Education. On May 8 and again June 12, 1967, 5Vzmill levies earmarked for teachers' salaries were rejected. On Jan. 8, a $15.5 million bonding issue for school construction was trounced by a nearly 2-to-l margin. School Board President Hazen J. Schumacher Jr., menting on the victory, said: "We are gratified at the results and see this as a strong vote of confidence for our superintendent, Dr. (W. Scott) Westerman (Jr.)." Trustee Joseph R. Julin called the millage victory "a bright day for education in Ann Arbor." Incumbent Trustee Harold J. Lockett, who captured the largest number of votes among the candidates in his bid for reelection, remarked that he is "very grateful to the voters of the district, particularly f o r passing the millage. It indicates that Arm Arbor wants to maintain and improve the high quality of education for our children." The 11.66 - mili package for school operations received virtually no opposition from community organizations. It was endorsed by the Chamber of Commerce, the Issues Committee of the Junior Chamber of Commerce, the Board of Realtors, the Parent - Teacher Legislative Committee, the American Association of University Women, the Citizens' Council for Good Schools, the Executive Board of the Citizens' Council, Youth for Education and Schools and many local Parent-Teacher Organizations. Westerman expressed his "appreciation" today for the leadership provided by these organizations in their campaigns for the millage. He also praised the "exceptionally able and dedicated leadership" of Eugene Fowler and Ralph Rupp, citizens who were co-chairman of the millage campaign. The Ann Arbor Education Association (formerly called the Ann Arbor Teachers' Association) did not take a stand on the millage, because its members feit the funds provided for salary and fringe benefit increases were inadequate. Harold Collins, new president of the AAEA, expressed pleasure last night that the "Ann Arbor taxpayers have shown their interest in the continu ation of an excellent school system." But he called the newly-passed millage "inadequate." "The 'hold-the-line' budget will hold the line as far as program and services are concernëd," Collins said. "But as concerns teachers' salaries, it will only represent a 'falling aehind' and the AAEA has no intention of accepting this position. I would hope that now the tföardoiËducation will bëgïnl to make real progress in 1 ations and that we may arrive I at an acceptable contract soon." I Trustee Paul H. Johnson I staunchly opposed the millage I proposition, and was the lonel trustee to vote against putting I the proposal on yesterday's 1 lot. The 11.66-mül package had I originally been slated for May I 13. It was postponed and 1 bined with the annual Board of I Education election because of I legal complications. The tax levy includes a 1 mili renewal and 7.16 additional I milis. The school board has 1 mated that the new millage will I mean approximately a 31 per I cent increase in taxes. The millage will provide funds I for a $17.48 million budget which I Westerman has estimated will I be needed for the 1968-69 school I year. He has called the budget I "conservative" and I line." A total of 373 absentee ballots I were returned in time to be I counted. The Administrative Offices I were jammed with school board I members, administrative staff I and citizens when the final I turns were posted at 11 p.m. A I crowd began gathering about 9 I p.m. to hear the results.