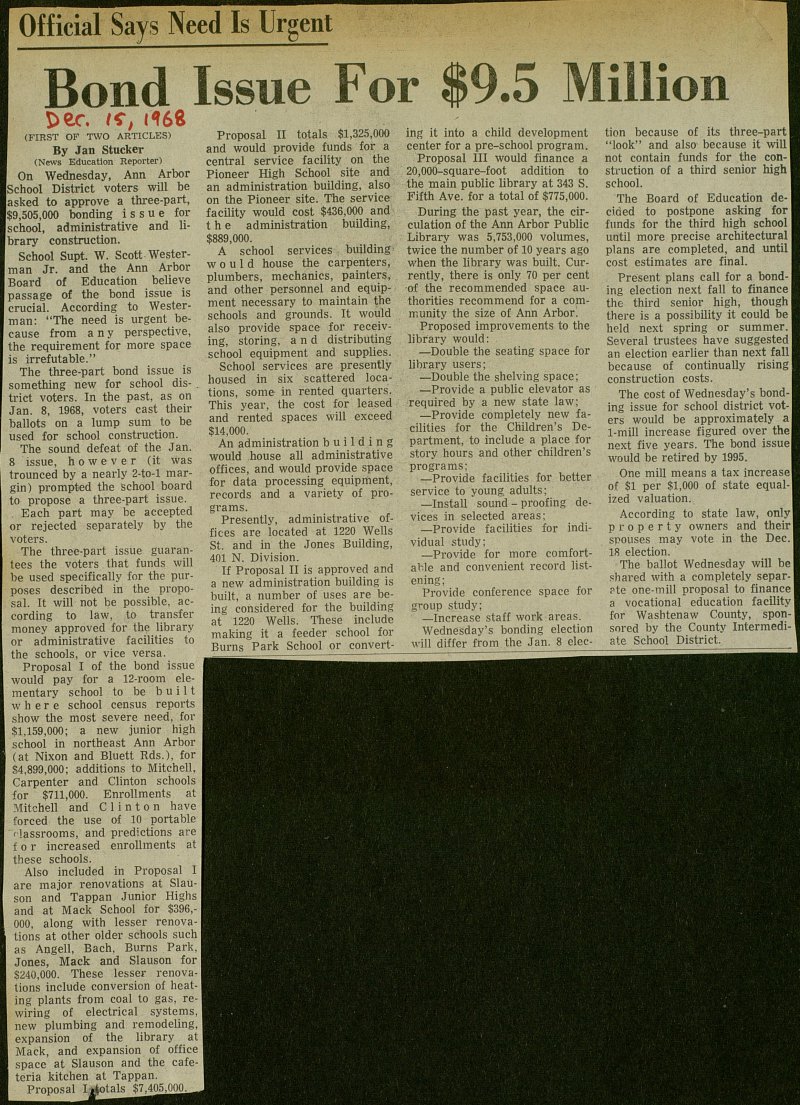 (FIRST OF TWO ARTICLES) On Wednesday, Ann Arbor School District voters will be asked to approve a three-part, $9,505,000 bonding issue for school, administrative and library construction. School Supt. W. Scott Westerman Jr. and the Ann Arbor Board of Education belieye passage of the bond issue is crucial. According to Westerman: "The need is urgent because from any perspective, the requirement for more space is irrefutable." The three-part bond issue is something new for school . trict voters. In the past, as on Jan. 8, 1968, voters cast their ballots on a lump sum to be used for school construction. The sound defeat of the Jan. 8 issue, h o w e v e r (it was trounced by a nearly 2-to-l margin) prompted the school board to propose a three-part issue. Each part may be accepted or rejected separately by the voters. The three-part issue guarantees the voters that funds will be used specifically for the purposes describèd in the proposal. It will not be possible, according to law, to transfer money approved for the library or administrative facilities to the schools, or vice versa. Proposal I of the bond issue would pay for a 12-room elementary school to be built w h e r e school census reports show the most severe need, for $1.159,000; a new junior high school in northeast Ann Arbor (at Nixon and Bluett Rds.), for 84,899,000; additions to Mitchell, Carpenter and Clinton schools for $711,000. Enrollments at Mitchell and Clinton have forced the use of 10 portable classrooms, and predictions are f o r increased enrollments at these schools. Also included in Proposal I are major renovations at Slauson and Tappan Junior Highs and at Mack School for $396,000, along with lesser renovations at other older schools such as Angelí, Bach, Burns Park, Jones, Mack and Slauson for $240,000. These lesser renovations include conversión of ' ing plants from coal to gas, rewiring of electrical systems, new plumbing and remodeling, I expansión of the library at Mack, and expansión of office space at Slauson and the cafeteria kitchen at Tappan. Proposal I'ttotals $7,405,000. _ Proposal II totals $1,325,000 and would provide funds for a central service facility on the Pioneer High School site and an administration building, also on the Pioneer site. The service facility would cost $436,000 and the administration building, $889,000. A school services building would house the carpenters, plumbers, mechanics, painters, and other personnel and equipment necessary to maintain the schools and grounds. It would also provide space for receiving, storing, and distributing school equipment and supplies. School services are presently housed in six scattered locations, some in rented quarters. This year, the cost for leased and rented spaces will exceed $14,000. An administration building would house all administraüve offices, and would provide space for data processing equipment, records and a variety of programs. Presently, administraüve offices are located at 1220 Wells St. and in the Jones Building, 401 N. División. If Proposal II is approved and a new administration building is built, a number of uses are being considered for the building at 1220 Wells. These include making it a feeder school for Burns Park School or ing it into a child development center for a pre-school program. Proposal III would finance a 20,000-square-foot addition to the main public library at 343 S. Fifth Ave. for a total of $775,000. During the past year, the circulation of the Ann Arbor Public Library was 5,753,000 volumes, twice the number of 10 years ago when the library was built. Currently, there is only 70 per cent of the recommended space authorities recommend for a community the size of Ann Arbor! Proposed improvements to the library would: -Doublé the seating space for library users; -Doublé the shelving space; - Provide a public elevator as required by a new state law; -Provide completely new facilities for the Chüdren's Department, to include a place for story hours and other chüdren's programs; -Provide facilities for better service to young adults; - Install sound - proofing devices in selected areas; -Provide facilities for individual study; - Provide for more comfortable and convenient record listening; Provide conference space for group study; - Increase staff work areas. Wednesday's bonding election will differ from the Jan. 8 tion because of its three-partl "look" and also because it wiUl not contain funds for the 1 struction of a third senior high school. The Board of Education decided to postpone asking for funds for the third high school until more precise architectural plans are completed, and until cost estimates are final. Present plans cali for a bonding election next fall to finance the third senior high, though there is a possibility it could be held next spring or summer. Several trustees have suggested an election earlier than next fall because of continually rising construction costs. The cost of Wednesday's bonding issue for school district voters would be approximately a 1-mill increase figured over the next five years. The bond issue would be retired by 1995. One mili means a tax increase of $1 per $1,000 of state equalized valuation. According to state law, only' property owners and their spouses may vote in the Dec. 18 election. The ballot Wednesday will be shared with a completely separ?te one-mill proposal to finance a vocational education facility for Washtenaw County, sponsored by the County Intermedíate School District.