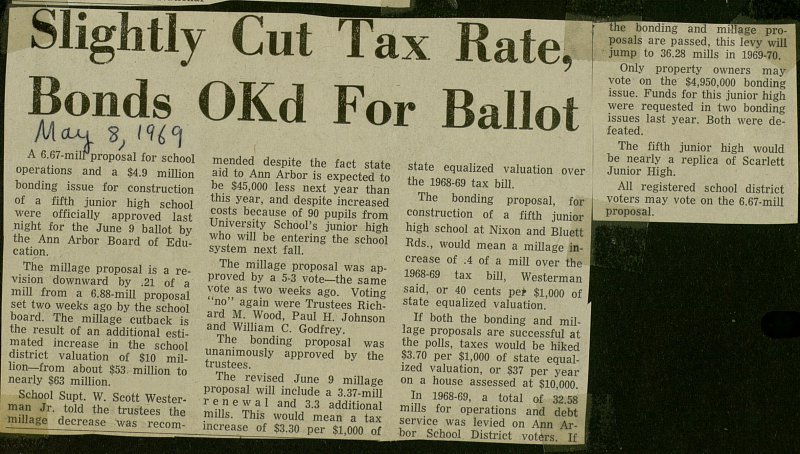 A 6.67-milrproposal for school operations and a $4.9 million bonding issue for construction of a fifth junior high school were officially approved last night for the June 9 ballot by the Ann Arbor Board of Education. The millage proposal is a revisión downward by (21 of a mili from a 6.88-mill proposal set two weeks ago by the school board. The millage cutback is the result of an additional estimated increase in the school district valuation of $10 million- from about $53. million to nearly $63 million. School Supt. W. Scott Westerman Jr. told the trustees the millage decrease was mended despite the fact state aid to Ann Arbor is expeeted to be $45,000 less next year than this year, and despite increased costs because of 90 pupils from University School's junior high who will be entering the school system next fall. The millage proposal was approved by a 5-3 vote- the same vote as two weeks ago. Voting "no" again were Trustees Richard M. Wood, Paul H. Johnson and William C. Godfrey. The bonding proposal was unanimously approved by the trustees. The revised June 9 millage proposal will include a 3.37-mill rene wal and 3.3 additional milis. This would mean a tax mcrease of $3.30 per $1,000 of state equalized valuation over the 1968-69 tax bilí. The bonding proposal, for construction of a fifth junior high school at Nixon and Bluett Rds., would mean a millage increase of .4 of a mili over the 1968-69 tax bilí, Westerman said, or 40 cents pet $1,000 of state equalized valuation. If both the bonding and millage proposals are successful at the polls, taxes would be hiked $3.70 per $1,000 of state equalized valuation, or $37 per year on a house assessed at $10,000. In 1968-69, a total of 32.58 milis for operations and debt service was levied on Ann ArboSchoolDistrictvotêrsIfJ the bonding and mülage proposals are passed, this levy will jump to 36.28 milis in 1969-70. Only property owners may vote on the $4,950,000 bonding issue. Funds for this junior high were requested in two bonding issues last year. Both were defeated. The fifth junior high would be nearly a replica of Scarlett Junior High. All registered school district voters may vote on the 6.67-mill proposal.