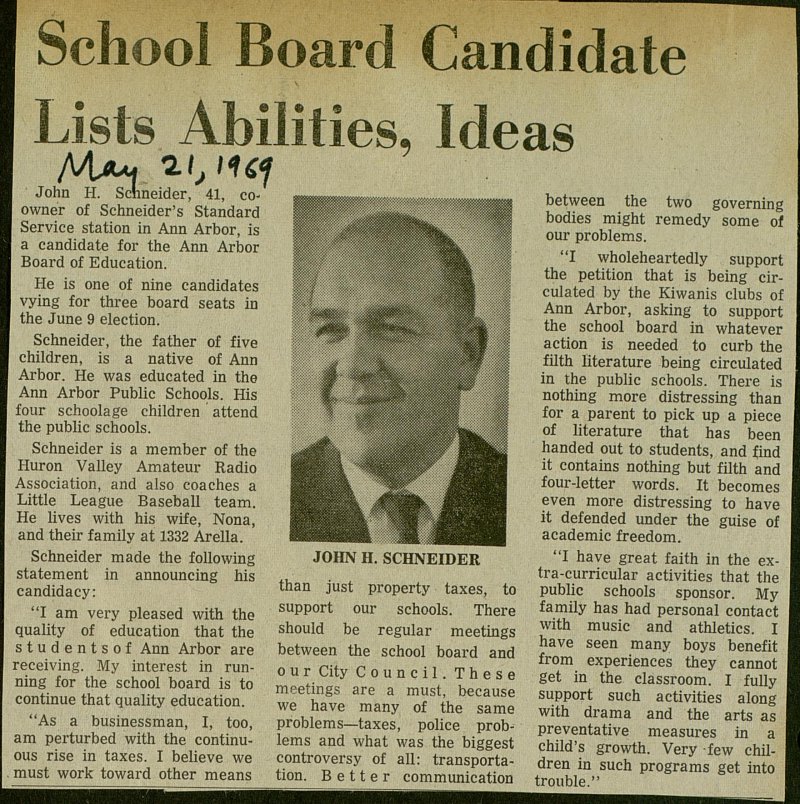 John H. Schneider, 41, coowner of Schneider' s Standard Service station in Ann Arbor, is a candidate for the Ann Arbor Board of Education. ' He is one of nine candidates vying for three board seats in I the June 9 election. Schneider, the father of five children, is a native of Ann Arbor. He was educated in the Ann Arbor Public Schools. His four schoolage children attend the public schools. Schneider is a member of the Huron Valley Amateur Radio Association, and also coaches a Little League Baseball team. He lives with his wife, Nona, and their family at 1332 Arella. Schneider made the following statement in announcing his candidacy: "I am very pleased with the quality of education that the studentsof Ann Arbor are receiving. My interest in running for the school board is to continue that quality education. "As a businessman, I, too, am perturbed with the continuous rise in taxes. I believe we must work toward other means than just property taxes, to support our schools. There should be regular meetings between the school board and our City Council. These meetings are a must, because we have many of the same problems- taxes, pólice problems and what was the biggest controversy of all: transportation. B e 1 1 e r communication between the two governing bodies might remedy some oí our problems. "I wholeheartedly support the petition that is being circulated by the Kiwanis clubs of Ann Arbor, asking to support the school board in whatever action is needed to curb the filth literature being circulated in the public schools. There is nothing more distressing than for a parent to piek up a piece of literature that has been handed out to students, and find it contains nothing but filth and four-letter words. It becomes even more distressing to have it defended under the guise of academie freedom. "I have great faith in the extra-curricular activities that the I public schools sponsor. My family has had personal contact with music and athletics. I have seen many boys benefit from experiences they cannot get in the classroom. I fully I support such activities along I with drama and the arts as I preventative measures in a I child's growth. Very few I dren in such programs get into I trouble."