City Policeman Announces For Board Of Education 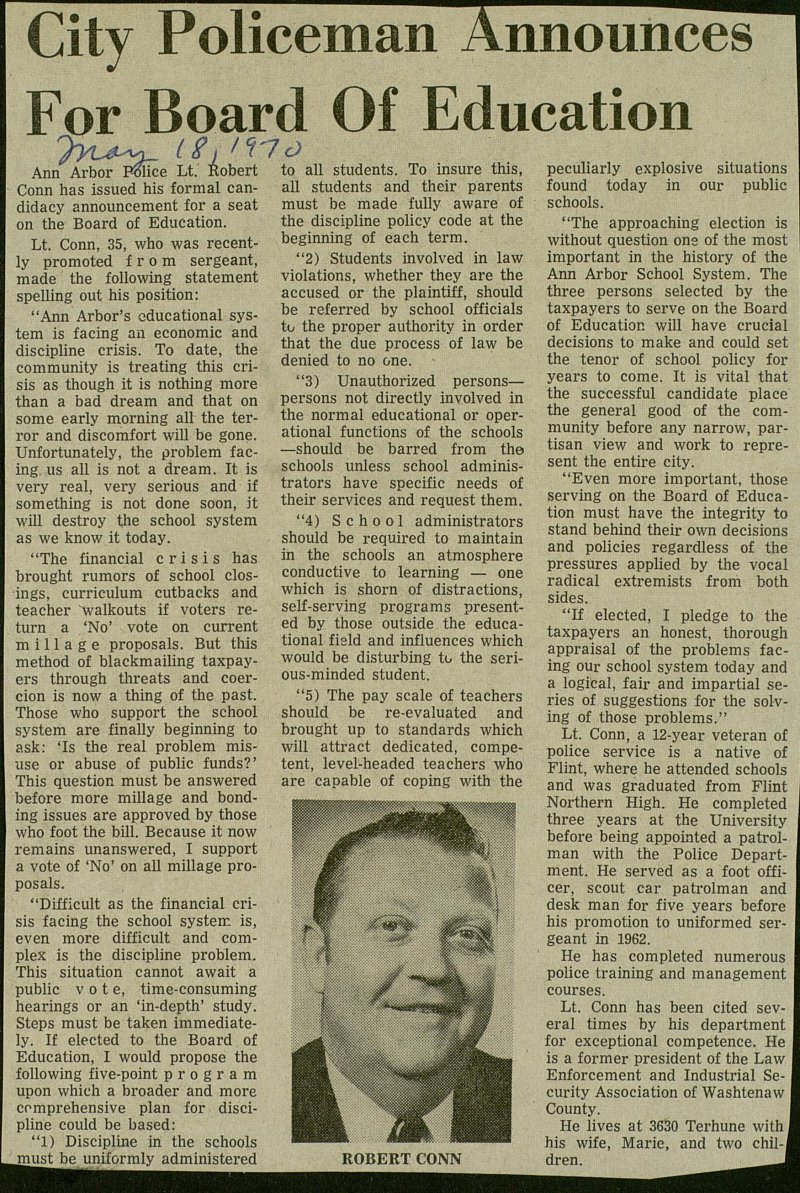 Ann Arbor Bölice Lt. Robert Conn has issued his formal candidacy announcement for a seat on the Board of Education. Lt. Conn, 35, who was recently promoted f r o m sergeant, made the following statement spelling out his position: "Ann Arbor's educational system is facing au economie and discipline crisis. To date, the community is treating this crisis as though it is nothing more than a bad dream and that on some early morning all the terror and discomfort will be gone. Unfortunately, the problem facing us all is not a dream. It is very real, very serious and if something is not done soon, it will destroy the school system as we know it today. "The financial crisis has brought rumors of school closings, curriculum cutbacks and teacher walkouts if voters return a 'No' vote on current m i 1 1 a g e proposals. But this method of blackmailing taxpayers through threats and coerción is now a thing of the past. Those who support the school system are finally beginning to ask: 'Is the real problem misuse or abuse of public funds?' This question must be answered before more millage and bonding issues are approved by those who foot the bill. Because it now remains unanswered, I support a vote of 'No' on all millage proposals. "Difficult as the financial crisis facing the school system is, even more difficult and complex is the discipline problem. This situation cannot await a public vote, time-consuming hearings or an 'in-depth' study. Steps must be taken immediately. If elected to the Board of Education, I would propose the following five-point program upon which a broader and more comprehensive plan for discipline could be based: "1) Discipline in the schools must be uniformly administered to all students. To insure this, all students and their parents must be made fully aware of the discipline policy code at the beginning of each term. "2) Students involved in law violations, whether they are the accused or the plaintiff, should be referred by school officials to the proper authority in order that the due process of law be denied to no one. "3) Unauthorized persons - persons not directly involved in the normal educational or operational functions of the schools - should be barred from the schools unless school administrators have specific needs of their services and request them. "4) School administrators should be required to maintain in the schools an atmosphere conductive to learning - one which is shorn of distractions, self-serving programs presented by those outside the educational fisld and influences which would be disturbing to the serious-minded student. "5) The pay scale of teachers should be re-evaluated and brought up to standards which will attract dedicated, competent, level-headed teachers who are capable of coping with the peculiarly explosive situations found today in our public schools. "The approaching election is without question ons of the most important in the history of the Ann Arbor School System. The three persons selected by the taxpayers to serve on the Board of Educatior. will have crucial decisions to make and could set the tenor of school policy for years to come. It is vital that the successful candidate place the general good of the community before any narrow, partisan view and work to represent the entire city. "Even more important, those serving on the Board of Education must have the integrity to stand behind their own decisions and policies regardless of the pressures applied by the vocal radical extremists from both sides. "If elected, I pledge to the taxpayers an honest, thorough appraisal of the problems facing our school system today and a logical, fair and impartial series of suggestions for the solving of those problems." Lt. Conn, a 12-year veteran of pólice service is a native of Flint, where he attended schools and was graduated from Flint Northern High. He completed three years at the University before being appointed a patrolman with the Pólice Department. He served as a foot officer, scout car patrolman and desk man for five years before his promotion to uniformed sergeant in 1962. He has completed numerous pólice training and management courses. Lt. Conn has been cited several times by his department for exceptional competence. He is a former president of the Law Enforcement and Industrial Security Association of Washtenaw County. He lives at 3630 Terhune withl his wife, Marie, and two chil-j dren. J