Millage Vote A Possibility In February 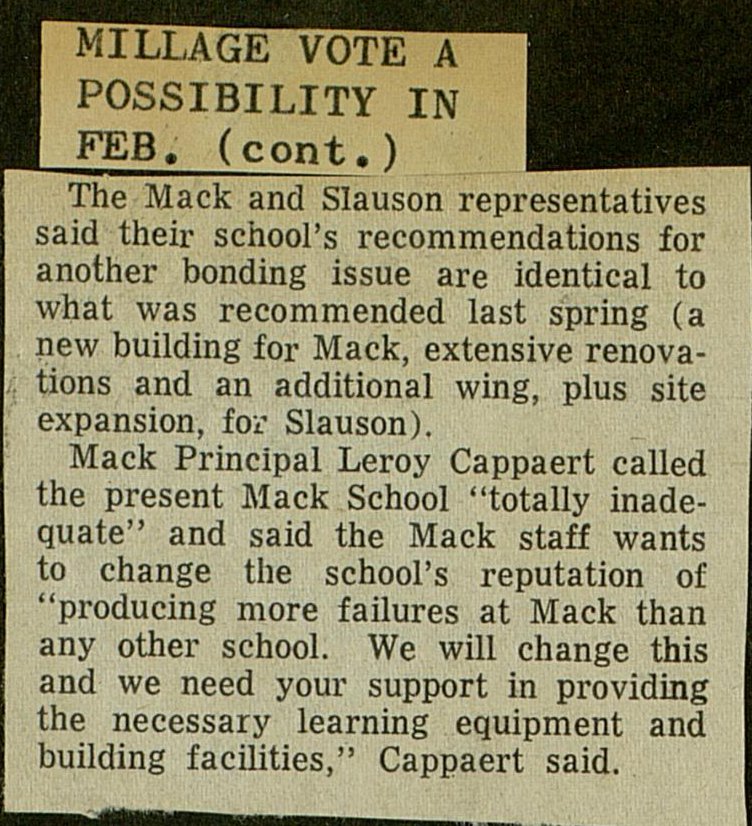 II y - A bonding election for school construction and renovation will not face Ann Arbor School District voters Feb. 15, but a millage election is still possible on that date. Dr. Charles L. Votaw, chairman of a citizens' Election Proposals Committee, told the Board of Education yesterday several factors have made it impossible for the committee to come up with complete bonding recommendations for the entire school district by Dec. 1. Dec. 1 is the date on which a bonding amount would have to be recommended in time for a February election. Votaw said his committee will continue to work toward bonding recommendations for the June 14 ballot, however- the date of the annual school elections. Previously, the committee had hoped to recommend a bonding issue, including at least some of the issues which were defeated in last June's $36 million proposal, along with a millage proposal. Votaw said some of the factors which would delay a bonding recommendation are: -Several slowdowns in the community survey which will delay the results until late December, too late for use by the Election Proposal Committee. (The survey of 1,200 residents is completed and the questionnaires aire now being mailed back). -The passage of the anti-parochiaid Proposal C Nov. 3 which makes estimates of revenue for 1970-71 "very difficult and precarious." - Altérnate types of school programs now under discussion by the board, such as split and overlapping sessions, and the "middle school" plan. Votaw said his commltee hopes to decide on a millage recommendation by Jan. 13. He said there is a possibility of asking for a three-mill renewal plus an additional amount in February, or putting the renewal only on the winter ballot. Another option would be waiting until June for a millage proposal. Before Votaw spoke, Parent-Teacher Organization study groups from five schools told the board of their building needs. Those study groups were formed to help the board in its deliberations about a bonding issue. RepresentaUves of the Mack, Slauson, Clinton, Dixboro and Angelí PTOs spoke. Both Clinton and Dixboro representatives asked that their school be brought up to minimal standards, and asked that the bonding proposals group minimal school improvements so they can be voted on separately. The Clinton spokesman said a new 20-room school on Ellsworth Kd. must also be given the "highest prioritv." (over please) MILLA GE VOTE A POSSIBILITY IN FEB. (cont.) The Mack and Slauson representatives said their school's recommendations for another bonding issue are identical to what was recommended last spring (a new building for Mack, extensive renovations and an additional wing, plus site expansión, for Slauson). Mack Principal Leroy Cappaert called the present Mack School "totally inadequate" and said the Mack staff wants to change the school's reputation of "producing more failures at Mack than any other school. We will change this and we need your support in providing the necessary learning equipment and building facilities," Cappaert said.