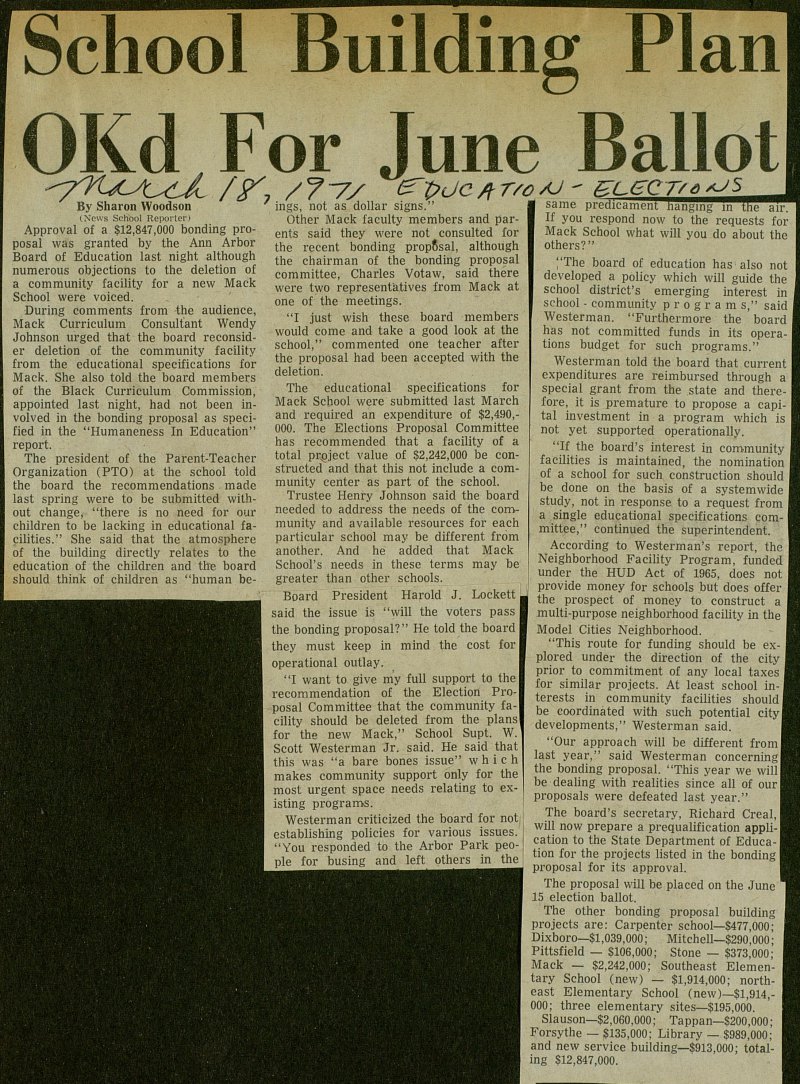 Approval of a $12,847,000 bonding proposal was granted by the Ann Arbor Board of Education last night although numerous objections to the deletion of a community facility for a new Mack School were voiced. During comments from the audience, Mack Curriculum Consultant Wendy Johnson urged that the board reconsider deletion of the community facility from the educational specifications for Mack. She also told the board members of the Black Curriculum Commission, appointed last night, had not been involved in the bonding proposal as specified in the "Humaneness In Education" report. The president of the Parent-Teacher Organization (PTO) at the school told the board the recommendations made last spring were to be submitted without change, "there is no need for our children to be lacking in educational facilities." She said that the atmosphere of the building directly relates to the education of the children and the board should think of children as "human ings, not as dollar signs." Other Mack faculty members and parents said they were not consulted for the recent bonding propfisal, although the chairman of the bonding proposal coramittee, Charles Votaw, said there were two representatives from Mack at one of the meetings. "I just wish these board members would come and take a good look at the school," commented one teacher after the proposal had been accepted with the deletion. The educational specifications for Mack School were submitted last March and required an expenditure of $2,490,000. The Elections Proposal Committee has recommended that a facility of a total project value of $2,242,000 be constructed and that this not include a community center as part of the school. Trustee Henry Johnson said the board needed to address the needs of the community and available resources for each particular school may be different from another. And he added that Mack School's needs in these terms may be greater than other schools. Board President Harold J. Lockett said the issue is "will the voters pass the bonding proposal?" He told the board they must keep in mind the cost for operational outlay. "I want to give my full support to the recommendation of the Election Proposal Committee that the community facility should be deleted from the plans for the new Mack," School Supt. W. Scott Westerman Jr. said. He said that this was "a bare bones issue" w h i c h makes community support only for the most urgent space needs relating to existing programs. Westerman criticized the board for not establishing policies for various issues. "You responded to the Arbor Park people for busing and left others in the same predicament nanging in the air. If you respond now to the requests for Mack School what will you do about the others?" "The board of education has also not developed a policy which will guide the school district's emerging interest in school - community program s," said Westerman. "Furthermore the board has not committed funds in its 1 tions budget for such programs." Westerman told the board that current expenditures are reimbursed through a special grant from the state and therefore, it is premature to propose a capital investment in a program which is not yet supported operationally. "If the board's interest in coromunity facilities is maintained, the nomination of a school for such construction should be done on the basis of a systemwide study, not in response to a request from a single educational specifications committee," continued the superintendent. According to Westerman's report, the Neighborhood Facility Program, funded under the HUD Act of 1965, does not provide money for schools but does offer the prospect of money to construct a multi-purpose neighborhood facility in the Model Cities Neighborhood. "This route for funding should be explored under the direction of the city i prior to commitment of any local taxes for similar projects. At least school interests in community facilities should I be coordinated with such potential cityl developments," Westerman said. "Our approach will be different froml last year," said Westerman concerningl the bonding proposal. "This year we willl be dealing with realities since all of ourl proposals were defeated last year." The board's secretary, Richard Creal, I will now prepare a prequalification appli-l catión to the State Department of 1 tion for the projects listed in the bonding I proposal for its approval. The proposal will be placed on the June 15 election ballot. The other bonding proposal building projects are: Carpenter school- $477,000; Dixboro- $1,039,000; Mitchell- $290,000; Pittsfield - $106,000; Stone - $373,000; Mack - $2,242,000; Southeast Elementary School (new) - $1,914,000; northeast Elementary School (new)- $1,914,000; three elementary sites- $195,000. Slauson- $2,060,000; Ta ppan- $200,000; Forsythe - $135,000; Library - $989,000; and new service building- $913,000; totaling $12,847,000.