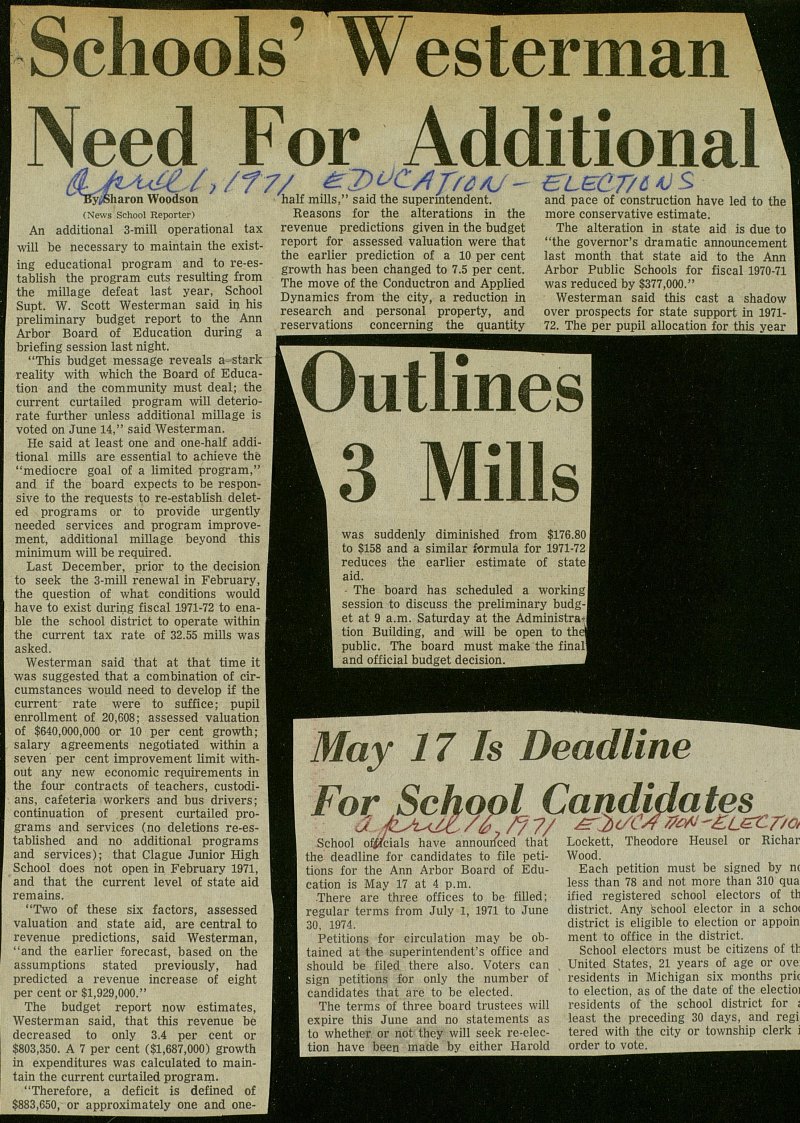 An additional 3-mill operational tax will be necessary to maintain the existing educational program and to re-establish the program cuts resulting from the millage defeat last year, School Supt. W. Scott Westerman said in his preliminary budget report to the Ann Arbor Board of Education during a briefing session last night. "This budget message reveáis a-stark reality with which the Board of Education and the community must deal; the current curtailed program will deteriórate further unless additional millage is voted on June 14," said Westerman. He said at least one and one-half additional milis are essential to achieve thé "mediocre goal of a limited program," and if the board expects to be responsive to the requests to re-establish deleted programs or to provide urgently needed services and program improvement, additional millage beyond this minimum will be required. Last December, prior to the decisión . to seek the 3-mill renewal in February, the question of what conditions would have to exist during fiscal 1971-72 to enable the school district to opérate within the current tax rate of 32.55 milis was asked. Westerman said that at that time it was suggested that a combination of circumstances would need to develop if the current' rate were to suffice; pupil enrollment of 20,608; assessed valuation of $640,000,000 or 10 per cent growth; salary agreements negotiated within a seven per cent improvement limit without any new economie requirements in the four contracts of teachers, custodians, cafetería workers and bus drivers; continuation of present curtailed programs and services (np deletions re-established and no additional programs and services); that Clague Junior High School does not open in February 1971, and that the current level of state aid remains. "Two of these six factors, assessed valuation and state aid, are central to revenue predictions, said Westerman, "and the earlier forecast, based on the assumptions stated previously, had predicted a revenue increase of eight per cent or $1,929,000." The budget report now estimates, Westerman said, that this revenue be decreased to only 3.4 per cent or $803,350. A 7 per cent ($1,687,000) growth in expenditures was calculated to maintain the current curtailed program. "Therefore, a deficit is defined of $883,650, or approximately one and half milis," said the superintendent. Reasons for the alterations in the revenue predictions given in the budget report for assessed valuation were that the earlier prediction of a 10 per cent growth has been changed to 7.5 per cent. The move of the Conductron and Applied Dynamics from the city, a reduction in research and personal property, and reservations concerning the quantity and pace of construction have led to the I more conservative estímate. The alteration in state aid is due to "the governor's dramatic announcement last month that state aid to the Ann Arbor Public Schools for fiscal 1970-71 was reduced by $377,000." Westerman said this cast a shadow over prospects for state support in 197172. The per pupil allocation for this year was suddenly diminished from $176.80 to $158 and a similar formula for 1971-72 1 reduces the earlier estímate of state aid. The board has scheduled a working session to discuss the preliminary budg-l et at 9 a.m. Saturday at the Administra! tion Building, and will be open to thei public. The board must make the final] and official budget decisión. J