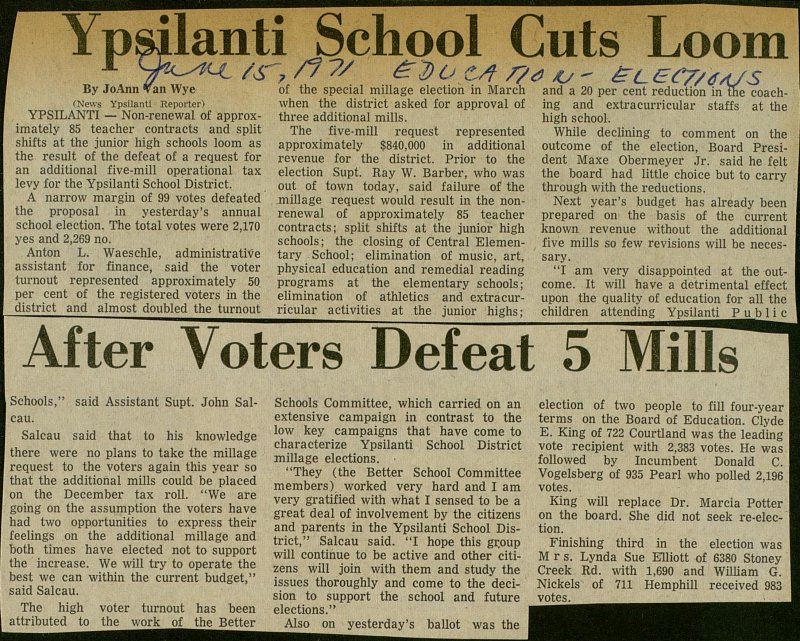 YPSILANTI - Non-renewal of approximately 85 teacher contracts and split shifts at the junior high schools loom as the result of the defeat of a request for an additional five-mill operational tax levy for the Ypsilanti School District. A narrow margin of 99 votes defeated the proposal in yesterday's annual school election. The total votes were 2,170 yes and 2,269 no. Anton L. Waeschle, administrative assistant for finance, said the voter turnout represented approximately 50 per cent of the registered voters in the district and almost doubled the turnout of the special millage electioh in March when the district asked for approval of three additional milis. The five-mill request represented approximately $840,000 in additional revenue for the district. Prior to the election Supt. Ray W. Barber, who was out of town today, said failure of the millage request would result in the nonrenewal of approximately 85 teacher contracts; split shifts at the junior high schools; the closing of Central Elementary School; elimination of music, art, physical education and remedial reading programs at the elementary schools; elimination of athletics and extracurricular activities at the junior highs; and a 20 per cent reduction in tne coaching and extracurricular staffs at the high school. While declining to comment on the outcome of the election, Board President Maxe Obermeyer Jr. said he felt the board had little choice but to carry through with the reductions. Next year's budget has already been prepared on the basis of the current known revenue without the additional five milis so few revisions will be necessary. "I am very disappointed at the outcome. It will have a detrimental effect upon the quality of education for all the children attending Ypsilanti Public Schools," said Assistant Supt. John Salcau. Salcau said that to his knowledge there were no plans to take the millage request to the voters again this year so that the additional milis could be placed on the December tax roll. "We are going on the assumption the voters have had two opportunities to express their feelings on the additional millage and both times have elected not to support the increase. We will try to opérate the best we can within the current budget," said Salcau. The high voter turnout has been attributed to the work of the Better Schools Committee, which carried on an extensive campaign in contrast to the low key campaigns that have come to characterize Ypsilanti School District millage elections. ■ "They (the Better School Committee members) worked very hard and I am very gratified with what I sensed to be a great deal of involvement by the citizens and parents in the Ypsilanti School District," Salcau said. "I hope this gr.oup will continue to be active and other citizens will join with them and study the issues thoroughly and come to the decisión to support the school and future elections." Also on yesterday's ballot was the election of two people to fill four-year terms on the Board of Education. Clyde E. King of 722 Courtland was the leading vote recipiënt with 2,383 votes. He was followed by Incumbent Donald C. Vogelsberg of 935 Pearl who polled 2,196 votes. King will replace Dr. Marcia Potter on the board. She did not seek re-election. Finishing third in the election was M r s. Lynda Sue Elliott of 6380 Stoney Creek Ed. with 1,690 and William G. Nickels of 711 Hemphill received 983 votes.