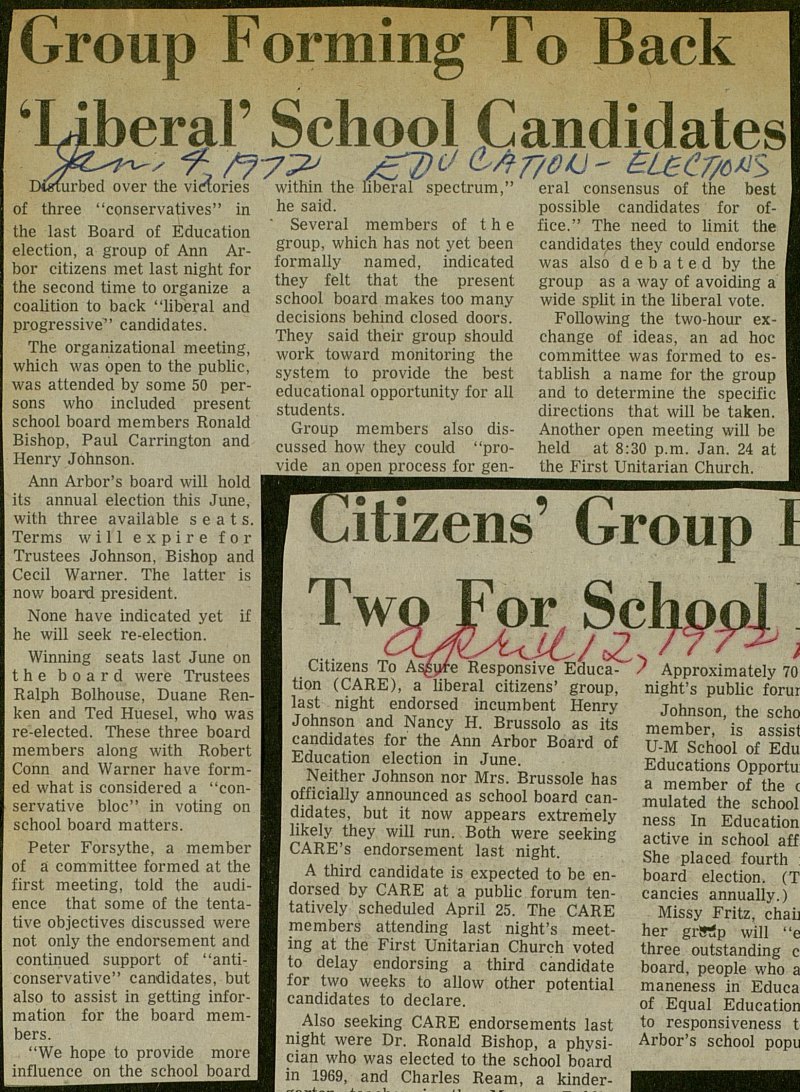 Dfemrbed over the victories of three "conservatives" in the last Board of Éducation election, a group of Ann Arbor citizens met last night for the second time to organize a coalition to back "liberal and progressive1' candidates. The organizational meeting, which was open to the public, was attended by some 50 persons who included present school board members Ronald Bishop, Paul Carrington and Henry Johnson. Ann Arbor's board will hold its annual election this June, with three available s e a t s. Terms will expire for Trustees Johnson, Bishop and Cecil Warner. The latter is now board president. None have indicated yet if he will seek re-election. Winning seats last June on the board were Trustees Ralph Bolhouse, Duane Renken and Ted Huesel, who was re-elected. These three board members along with Robert Conn and Warner have formed what is considered a "conservative bloc" in voting on school board matters. Peter Forsythe, a member of a committee formed at the first meeting, told the audience that some of the tentative objectives discussed were not only the endorsement and continued support of "anticonservative" candidates, but also to assist in getting information for the board members. "We hope to provide more influence on the school board within the überal spectrum," he said. ' Several members of the group, which has not yet been formally named, indicated they feit that the present school board makes too many decisions behind closed doors. They said their group should work toward monitoring the system to provide the best educational opportunity for all students. Group members also discussed how they could "provide an open process for eral consensus of the best possible candidates for office." The need to limit the candidates they could endorse was also debated by the group as a way of avoiding a wide split in the liberal vote. Following the two-hour exchange of ideas, an ad hoc committee was formed to establish a name for the group and to determine the specific directions that will be taken. Another open meeting will be held at 8:30 p.m. Jan. 24 at the First Unitarian Church.