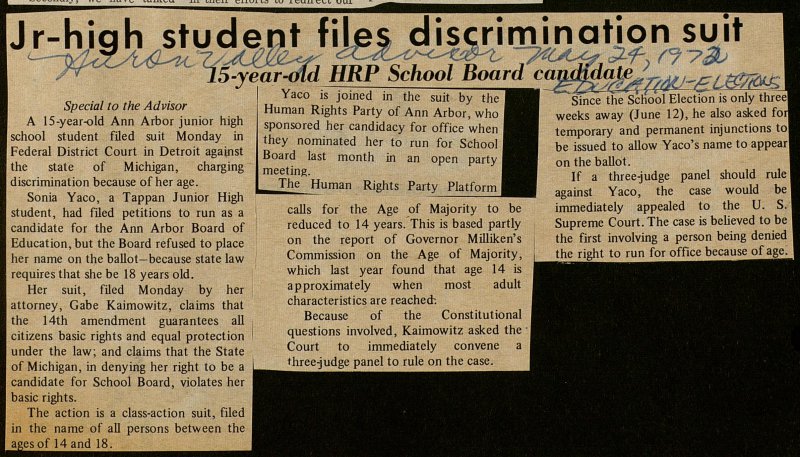 A 15-year-old Ann Arbor junior high school student filed suit Monday in Federal District Court in Detroit against the state of Michigan, charging discrimination because of her age. Sonia Yaco, a Tappan Junior High student, had filed petitions to run as a candidate for the Ann Arbor Board of Education, but the Board refused to place her name on the ballot- because state law requires that she be 18 years old. Her suit, filed Monday by her attorney, Gabe Kaimowitz, claims that the 14th amendment guarantees all citizens basic rights and equal protection under the law; and claims that the State of Michigan, in denying her right to be a candidate for School Board, violates her basic rights. The action is a class-action suit, filed in the name of all persons between the ages of 14 and 18. Yaco is joined in the suit by the Human Rights Party of Ann Arbor, who sponsored her candidacy for office when they nominated her to run for School Board last month in an open party meeting. The Human Rights Party Platform calis for the Age of Majority to be reduced to 14 years. This is based partly on the report of Governor Milliken's Commission on the Age of Majority, which last year found that age 14 is approximately when most adult characteristics are reached: Because of the Constitutional questions involved, Kaimowitz asked the Court to immediately convene a three-judge panel to rule on the case. Since the School Election is only threel weeks away (June 12), he also asked forl temporary and permanent injunctions tol be issued to allow Yaco's name to appearl on the ballot. If a three-judge panel should rulel against Yaco, the case would bel immediately appealed to the U. S. Supreme Court. The case is believed to be the first involving a person being denied the right to run for office becausejrfage