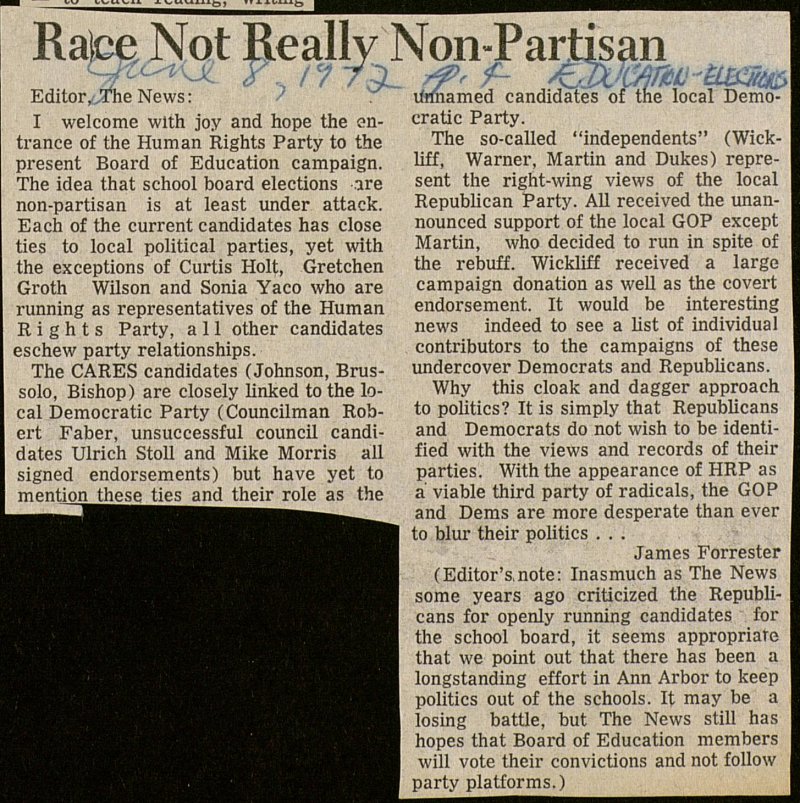 Editor Jrtie News: I welcome with joy and hope the sntrance of the Human Rights Party to the present Board of Education campaign. The idea that school board elections are non-partisan is at least under attack. Each of the current candidates has close ties to local political parties, yet with the exceptions of Curtis Holt, Gretchen Groth Wilson and Sonia Yaco who are running as representatives of the Human Rights Party, a 1 1 other candidates eschew party relationships. The CARES candidates (Johnson, Brussolo, Bishop) are closely linked tothe local Democratie Party (Councilman Robert Faber, unsuccessful council candidates Ulrich Stoll and Mike Morris all signed endorsements) but have yet to mentionthesies and their role as the ifcmamed candidates of the local Democratie Party. The so-called "independents" (Wickliff, Warner, Martin and Dukes) represent the right-wing views of the local Republican Party. All received the unannounced support of the local GOP except Martin, who decided to run in spite of the rebuff. Wickliff received a large campaign donation as well as the covert endorsement. It would be interesting news indeed to see a list of individual contributors to the campaigns of these undercover Democrats and Republicans. Why this cloak and dagger approach to politics? It is simply that Republicans and Democrats do not wish to be identified with the views and records of their parties. With the appearance of HRP as a viable third party of radicáis, the GOP and Dems are more desperate than ever to blur their politics . . . (Editor's.note: Inasmuch as The News some years ago criticized the Republicans for openly running candidates for the school board, it seems appropriare that we point out that there has been a longstanding effort in Ann Arbor to keep politics out of the schools. It may be a losing battle, but The News still has hopes that Board of Education members will vote their convictions and not follow party platforms.)