Turnout Of 16,700 Expected For School Board Election 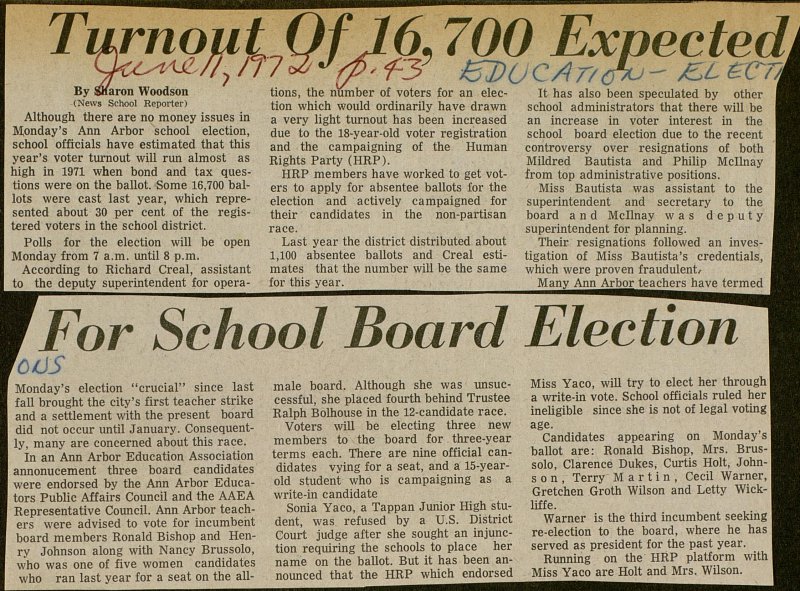 Although there are no money issues in M,onday's Ann Arbor school election, school officials have estimated that this year's voter turnout will run almost as high in 1971 when bond and tax questions were on the ballot. Some 16,700 ballots were cast last year, which represented about 30 per cent of the registered voters in the school district. Polls for the election will be open Monday from 7 a.m. until 8 p.m. According to Richard Creal, assistant to the deputy superintendent for tions, the nümber of voters for an election which would ordinarily have drawn a very light turnout has been increased due to the 18-year-old voter registration and the campaigning of the Human Rights Party (HRP). HRP members have worked to get voters to apply for absentee ballots for the election and actively campaigned for their candidates in the non-partisan race. Last year the district distributed about 1,100 absentee ballots and Creal estimates that the number will be the same for this year. It has also been speculated by other school administrators that there will be an increase in voter interest in the school board election due to the recent controversy over resignations of both Mildred Bautista and Philip Mcllnay from top administrative positions. Miss Bautista was assistant to the superintendent and secretary to the board and Mcllnay was deputy superintendent for planning. Their resignations followed an investigation of Miss Bautista's credentials, which were proven fraudulent Many Ann Arbor teachers have termed Monday's election "crucial" since last fall brought the city's first teacher strike and a settlement with the present board did not occur until January. Consequently, many are concerned about this race. In an Ann Arbor Education Association annonucement three board candidates were endorsed by the Ann Arbor Educators Public Affairs Council and the AAEA Representative Council. Ann Arbor teachers were advised to vote for incumbent board members Ronald Bishop and Henry Johnson along with Nancy Brussolo, who was one of five women candidates who ran last year for a seat on the male board. Although she was unsuccessful, she placed fourth behind Trustee Ralph Bolhouse in the 12-candidate race. Voters will be electing three new members to the board for three-year terms each. There are nine official candidates vying for a seat, and a 15-yearold student who is campaigning as a write-in candidate Sonia Yaco, a Tappan Junior High student, was refused by a U.S. District Court judge after she sought an injunction requiring the schools to place her name on the ballot. But it has been announced that the HRP which endorsed Miss Yaco, will try to elect her through a write-in vote. School officials ruled her ineligible since she is not of legal voting age. Candidates appearing on Monday s ballot are: Ronald Bishop, Mrs. Brussolo, Clarencë Dukes, Curtis Holt, Johns o n , Terry Martin, Cecil Warner, Gretchen Groth Wilson and Letty Wickliffe. Warner is the third incumbent seeking re-election to the board, where he has served as president for the past year. Running on the HRP platform with Miss Yaco are Holt and Mrs. Wilson.