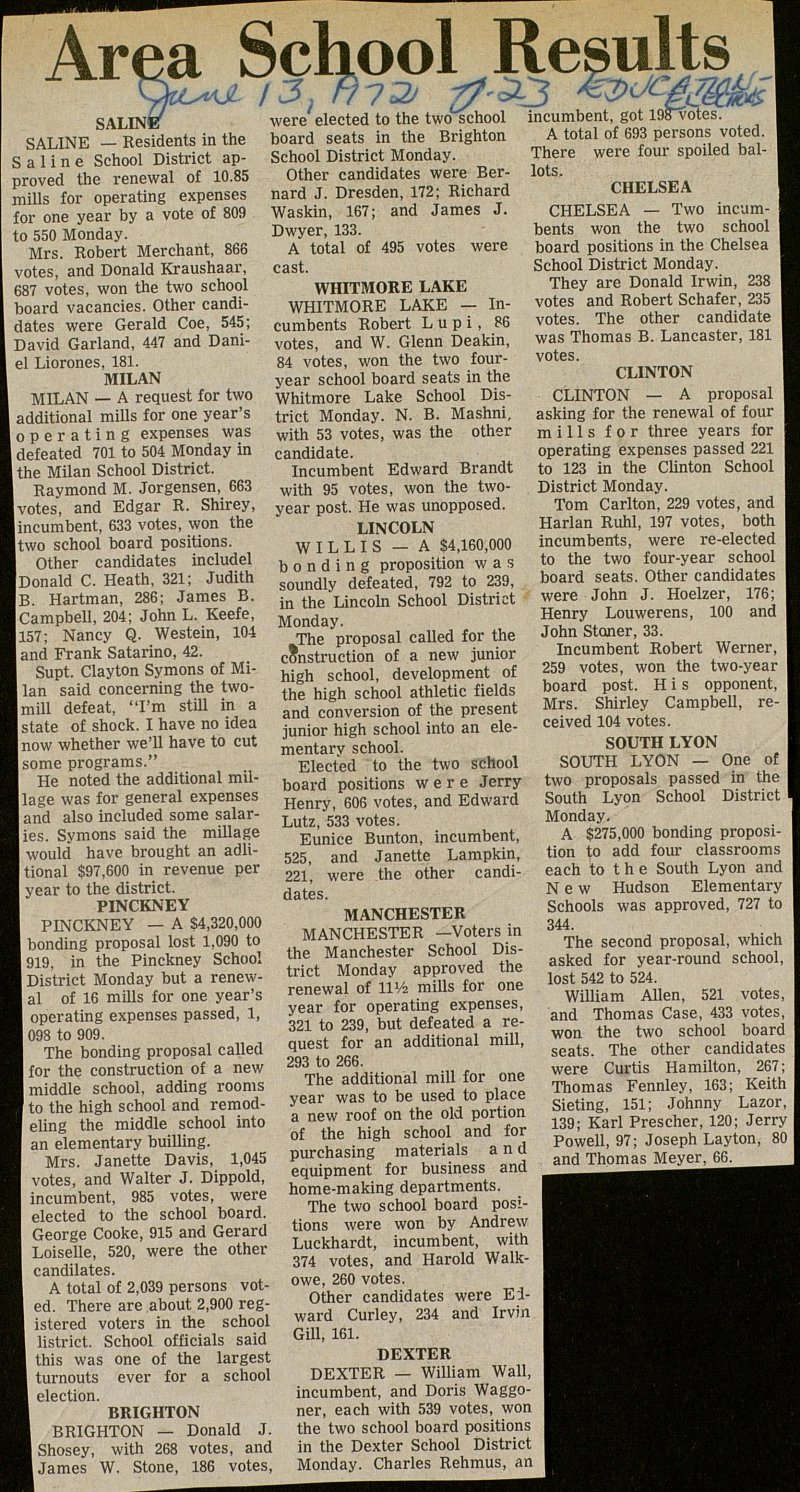 SALINír SALINE - Residents in the Saline School District approved the renewal of 10.85 milis for operating expenses for one year by a vote of 809 to 550 Monday. Mrs. Robert Merchant, 866 votes, and Donald Kraushaar, 687 votes, won the two school board vacancies. Other candidates were Gerald Coe, 545; David Garland, 447 and Daniel Liorones, 181. MILÁN MILÁN - A request for two additional milis for one year's operating expenses was defeated 701 to 504 Monday in the Milán School District. Raymond M. Jorgensen, 663 votes, and Edgar R. Shirey, incumbent, 633 votes, won the two school board positions. Other candidates includel Donald C. Heath, 321; Judith B. Hartman, 286; James B. Campbell, 204; John L. Keefe, 157; Nancy Q. Westein, 104 and Frank Satarino, 42. Supt. Clayton Symons of Milan said concerning the twomill defeat, "I'm still in a state of shock. I have no idea now whether we '11 have to cut some programs." He noted the additional millage was for general expenses and also included some salaries. Symons said the millage would have brought an adlitional $97,600 in revenue per vear to the district. PINCKNEY PINCKNEY - A $4,320,000 bonding proposal lost 1,090 to 919, in the Pinckney School District Monday but a renewal of 16 milis for one year's operating expenses passed, 1, 098 to 909. The bonding proposal called for the construction of a new middle school, adding rooms to the high school and remodeling the middle school into an elementary builling. Mrs. Janette Davis, 1,045 votes, and Walter J. Dippold, incumbent, 985 votes, were elected to the school board. George Cooke, 915 and Gerard Loiselle, 520, were the other candilates. A total of 2,039 persons voted. There are about 2,900 registered voters in the school listrict. School officials said this was one of the largest turnouts ever for a school election. BRIGHTON BRIGHTON - Donald J. I Shosey, with 268 votes, and James W. Stone, 186 votes, were elected to the two school board seats in the Brighton School District Monday. Other candidates were Bernard J. Dresden, 172; Richard Waskin, 167; and James J. Dwyer, 133. A total of 495 votes were cast. WHITMORE LAKE WHITMORE LAKE - Incumbents Robert L u p i , 86 votes, and W. Glenn Deakin, 84 votes, won the two fouryear school board seats in the Whitmore Lake School District Monday. N. B. Mashni, with 53 votes, was the other candidate. Incumbent Edward Brandt with 95 votes, won the twoyear post. He was unopposed. LINCOLN WILLIS - A $4,160,000 bonding proposition was soundly defeated, 792 to 239, in the Lincoln School District Monday. The proposal callea for the cönstruction of a new junior high school, development of the high school athletic fields and conversión of the present junior high school into an elementary school. Elected to the two school board positions w e r e Jerry Henry, 606 votes, and Edward Lutz, 533 votes. Eunice Bunton, incumbent, 525, and Janette Lampkin, 221, were the other candidates. MANCHESTER MANCHESTER - Voters in the Manchester School District Monday approved the renewal of IIV2 milis for one year for operating expenses, 321 to 239, but defeated a request for an additional mili, 293 to 266. The additional mili for one year was to be used to place a new roof on the old portion of the high school and for purchasing m ateríais and equipment for business and home-making departments. The two school board positions were won by Andrew Luckhardt, incumbent, with 374 votes, and Harold Walkowe. 260 votes. Other candidates were Eiward Curley, 234 and Irvin Gill, 161. DEXTER DEXTER - William Wall, incumbent, and Doris Waggoner, each with 539 votes, won the two school board positions in the Dexter School District Monday. Charles Rehmus, an incumbent, got 198"votes. A total of 693 persons voted. I There were four spoiled I lots. CHELSEA CHELSEA - Two incumbents won the two school board positions in the Chelsea School District Monday. They are Donald Irwin, 238 votes and Robert Schafer, 235 votes. The other candidate was Thomas B. Lancaster, 181 votes. CLINTON CLINTON - A propos al asking for the renewal of four milis for three years for operating expenses passed 221 to 123 in the Clinton School District Monday. Tom Carlton, 229 votes, and Harían Ruhl, 197 votes, both incumberrts, were re-elected to the two four-year school board seats. Other candidates were John J. Hoelzer, 176; Henry Louwerens, 100 and John Stoner, 33. Incumbent Robert Werner, I 259 votes, won the two-year board post. H i s opponent, I Mrs. Shirley Campbell, received 104 votes. j SOUTH LYON SOUTH LYON - One of two proposals passed in the South Lyon School District I Monday. A $275,000 bonding proposition to add four classrooms each to the South Lyon and New Hudson Elementary Schools was approved, 727 to 344. The second proposal, which asked for year-round school, lost 542 to 524. William Allen, 521 votes, and Thomas Case, 433 votes, won the two school board seats. The other candidates were Curtis Hamilton, 267; Thomas Fennley, 163; Keith Sieting, 151; Johnny Lazor, 139; Karl Prescher, 120; Jerry Powell, 97; Joseph Layton, 80 and Thomas Meyer, 66.