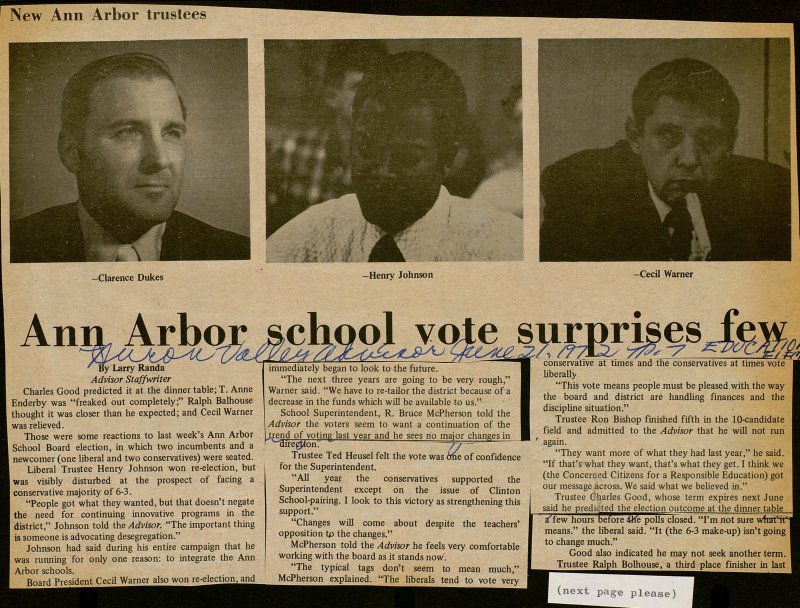 Charles Good predicted it at the dinner table; T. Anne Enderby was "freaked out completely;" Ralph Balhouse thought it was closer than he expected; and Cecil Warner was relieved. Those were some reactions to last week's Ann Arbor School Board election, in which two incumbents and a newcomer (one liberal and two conservatives) were seated. Liberal Trustee Henry Johnson won re-election, but was visibly disturbed at the prospect of facing a conservative majority of 6-3. "People got what they wanted, but that doesn't negate the need for continuing innovative programs in the district," Johnson told the Advisor. "The important thing is someone is advocating desegregation." Johnson had said during his entire campaign that he was running for only one reason: to intégrate the Ann Arbor schools. Board President Cecil Warner also won re-electionand immediately began to look to the future. "The next three years are going to be very rough," Warner said. "We have to re-tailor the district because of a decrease in the funds which will be available to us." School Superintendent, R. Bruce McPherson told the Advisor the voters seem to want a continuation of the trend of votingjast vear and he sees no major changes in (liregjion. yy Trustee Ted Heusel feit the vote was me of confidence for the Superintendent. "All year the conservatives supported the Superintendent except on the issue of Clinton School-pairing. I look to this victory as strengthening this support." "Changes will come about despite the teachers' opposition tp the changes." McPherson told the Advisor he feels very comfortable working with the board as it stands now'. "The typical tags don't seem to mean much," McPherson explained. "The liberáis tend to vote very conservative at ümes and the conservatives at tunes vote liberally "This vote means people must be pleased with the way the board and district are handling finances and the discipline situation." Trustee Ron Bishop finished fifth in the 10-candidate field and admitted to the Advisor that he will not run again. "They want more of what they had last year," he said. "If that's what they want, that's what they get. I think we (the Concerned Citizens for a Responsible Education) got our message across. We said what we believed in." Trustee Charles Good, whose term expires next June said he predictecHheelectipn outcome at the dinner table a few hours before the polls closed. 'Tm not sure whatifmeans." the liberal said. "It (the 6-3 make-up) isn't going to change much." Good also indicated he may not seek another term. Trustee Ralph Bolhouse, a third place finisher in last (next page please)