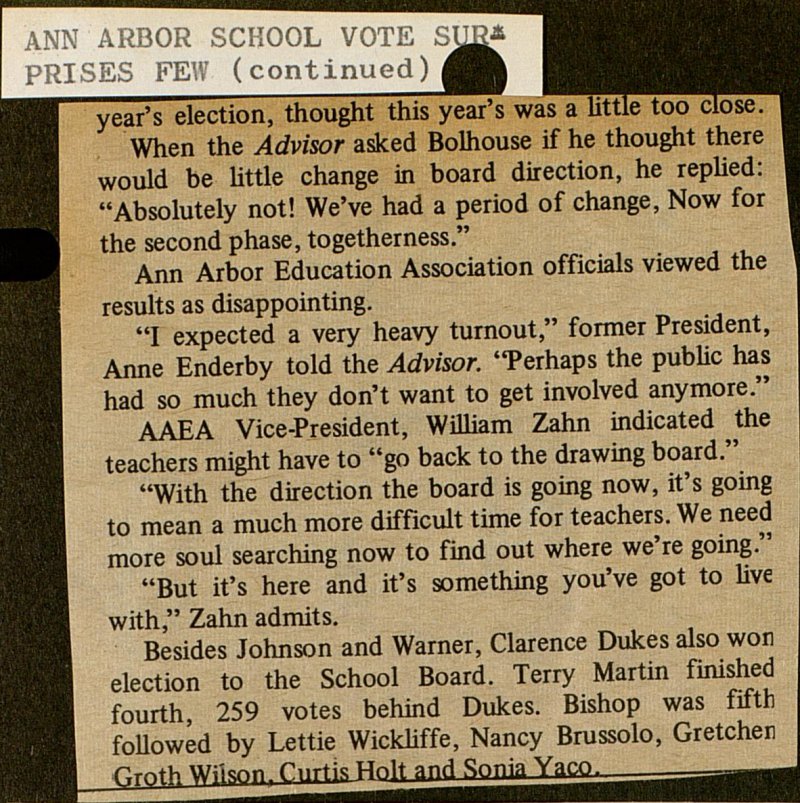 ANN ARBOR SCHOOL VOTE Slffi PRISES FEW (continued) A year's election, thought this year's was a little too close, l When the Advisor asked Bolhouse if he thought there would be little change in board direction, he repüed: I "Absolutely not! We've had a period of change, Now for the second phase, togetherness." Ann Arbor Education Association officials viewed the results as disappointing. "I expected a very heavy turnout," former President, Anne Enderby told the Advisor. 'Terhaps the public has had so much they don't want to get involved anymore." AAEA Vice-President, William Zahn indicated the teachers might have to "go back to the drawing board." "With the direction the board is going now, it's going to mean a much more difficult time for teachers. We need more soul searching now to find out where we're going. "But it's here and it's something you've got to live with," Zahn admits. Besides Johnson and Warner, Clarence Dukes also won election to the School Board. Terry Martin fimshed fourth, 259 votes behind Dukes. Bishop was fifth foUowed by Lettie Wickliffe, Nancy Brussolo, Gretchen Cmth Wilsnn. CurtisHnit and SoniaJúagp,.--,,