Meet The Mill: It's Tiny But Mighty Crucial To Schools 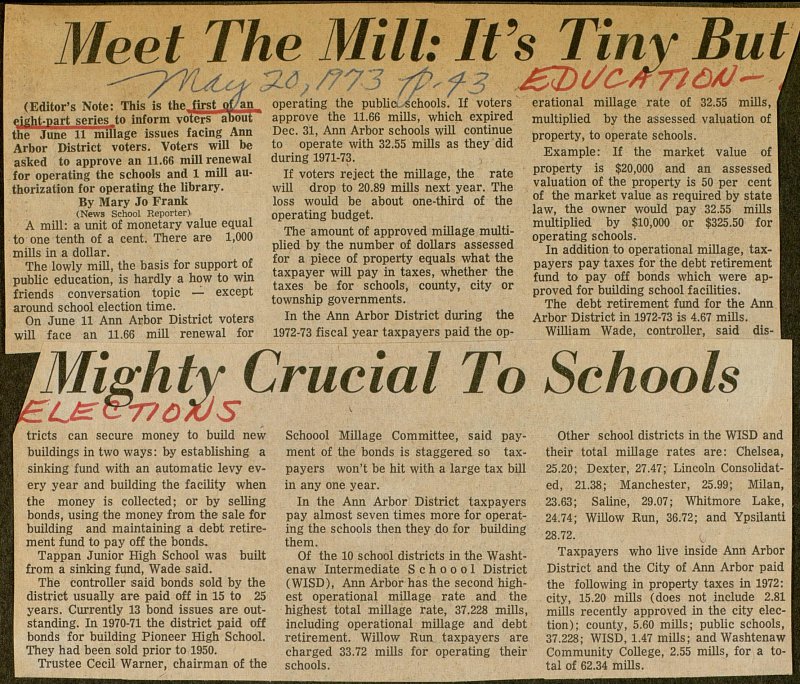 (Editor's Note: This is thn first opan eight-part series to inform voters al)out the June 11 miflage issues facing Ann Arbor District voters. Voters will be asked to approve an 11.66 mili renewal for operating the schools and 1 mili authorization for operating the library. By Mary Jo Frank (News School Reporter) A mili: a unit of monetary value equal to one tenth of a cent. There are 1,000 milis in a dollar. The lowly mili, the basis for support of public education, is hardly a how to win friends conversation topic - except around school election time. On June 11 Ann Arbor District voters will face an 11.66 mili renewal for operating the publicschools. If voters approve the 11.66 milis, which expired Dec. 31, Ann Arbor schools will continue to opérate with 32.55 milis as they did during 1971-73. If voters reject the millage, the rate will drop to 20.89 milis next year. The loss would be about one-third of the operating budget. The amount of approved millage multiplied by the number of dollars assessed for a piece of property equals what the taxpayer will pay in taxes, whether the taxes be for schools, county, city or township governments. In the Ann Arbor District during the 1972-73 fiscal year taxpayers paid the erational millage rate of 32.55 milis, multiplied by the assessed valuation of property, to opérate schools. Example: If the market value of property is $20,000 and an assessed valuation of the property is 50 per cent of the market value as required by state law, the owner would pay 32.55 milis multiplied by $10,000 or $325.50 for operating schools. In addition to operational millage, taxpayers pay taxes for the debt retirement fund to pay off bonds which were approved for building school facilities. The debt retirement fund for the Ann Arbor District in 1972-73 is 4.67 milis. William Wade, controller, said tricts can secure money to build new buildings in two ways : by establishing a sinking fund with an automatic levy every year and building the facility when the money is collected; or by selling bonds, using the money from the sale for building and maintaining a debt retirement fund to pay off the bonds. Tappan Junior High School was built from a sinking fund, Wade said. The controller said bonds sold by the district usually are paid off in 15 to 25 years. Currently 13 bond issues are outstanding. In 1970-71 the district paid off bonds for building Pioneer High School. They had been sold prior to 1950. Trustee Cecil Warner, chairman of the Schoool Millage Committee, said payment of the bonds is staggered so taxpayers won't be hit with a large tax bill in any one year. In the Ann Arbor District taxpayers pay almost seven times more for operating the schools then they do for building them. Of the 10 school districts in the Washtenaw Intermedíate Schoool District (WISD), Ann Arbor has the second highest operational millage rate and the highest total millage rate, 37.228 milis, including operational millage and debt retirement. Willow Run taxpayers are charged 33.72 müls for operating their schools. Other school districts in the WISD and their total millage rates are: Chelsea, 25.20; Dexter, 27.47; Lincoln Consolidated, 21.38; Manchester, 25.99; Milan, 23.63; Saline, 29.07; Whitmore Lake, 24.74; Willow Run, 36.72; and Ypsilanti 28.72. Taxpayers who live inside Ann Arbor District and the City of Ann Arbor paid the following in property taxes in 1972: city, 15.20 milis (does not include 2.81 milis recently approved in the city election); county, 5.60 milis; public schools, 37.228; WISD, 1.47 milis; and Washtenaw Community College, 2.55 milis, for a total of 62.34 milis.