Reform In School Tax Should Have Come By Now 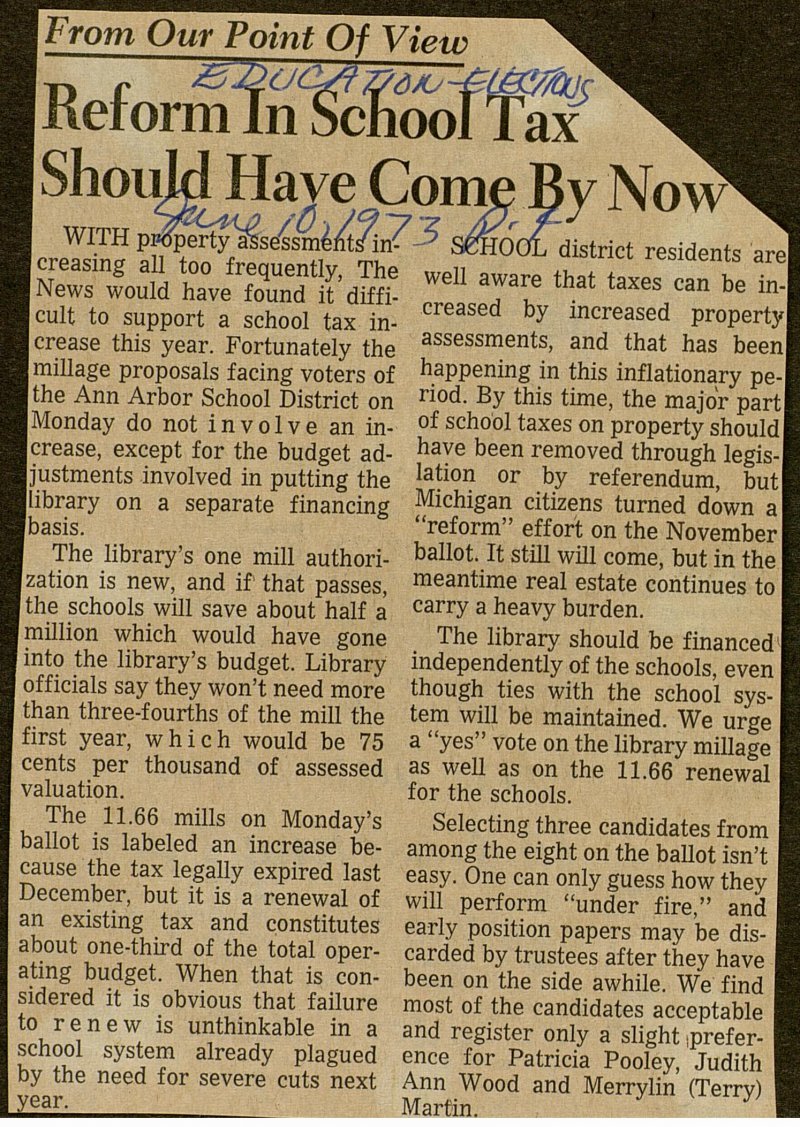 WITH prfperty Ssse'ssméñt ƒ in creasmg all too frequently, The News would have found it difficult to support a school tax increase this year. Fortunately the millage proposals facing voters of the Ann Arbor School District on Monday do not involve an increase, except for the budget adjustments involved in putting the library on a separate financing basis. The library's one mili authoriIzation is new, and if that passes, the schools will save about half a million which would have gone into the library's budget. Library officials say they won't need more than three-fourths of the mili the first year, which would be 75 cents per thousand of assessed valuation. The 11.66 milis on Monday's ballot is labeled an increase because the tax legally expired last December, but it is a renewal of an existing tax and constitutes about one-third of the total operating budget. When that is considered it is obvious that failure to renew is unthinkable in a school system already plagued by the need for severe cuts next year. ? séHOÖL district residents are] well aware that taxes can be increased by increased property assessments, and that has been happening in this inflationary period. By this time, the major part of school taxes on property shouldl have been removed through legis-l lation or by referendum, butl Michigan citizens turned down al "reform" effort on the November I ballot. It still will come, but in the I meantime real estáte continúes to I carry a heavy burden. The library should be financed' independently of the schools, even though ties with the school system will be maintained. We urge a "yes" vote on the library millage as well as on the 11.66 renewal for the schools. Selecting three candidates from among the eight on the ballot isn't i easy. One can only guess how they will perforra "under fire," and early position papers may be discarded by trustees after they have been on the side awhile. We find most of the candidates acceptable and register only a slight preference for Patricia Pooley, Judith Ann Wood and Merrylin (Terry) Martin.