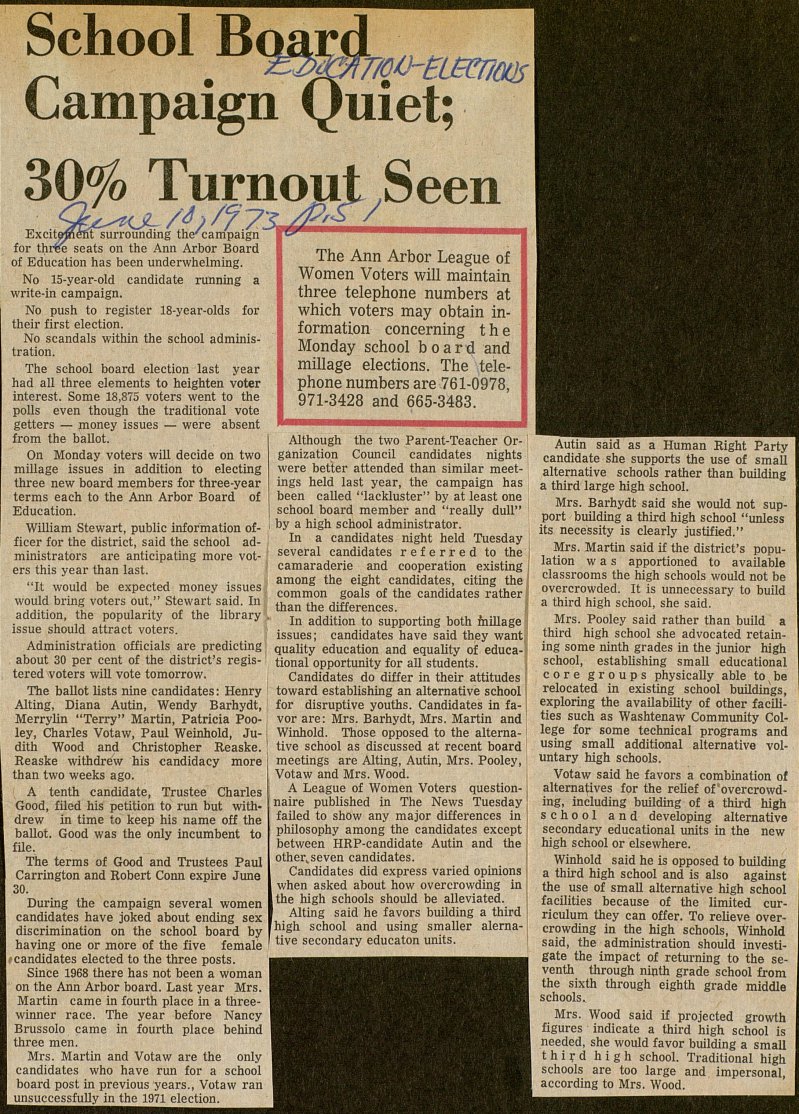 Excitajnéíítsurrounding the'campaign " for three seats on the Ann Arbor Board of Education has been underwhelming. No 15-year-old candidate running a write-in campaign. No push to register 18-year-olds for their first election. No scandals within the school administration. The school board election last year had all three elements to heighten voter interest. Some 18,875 voters went to the polls even though the traditional vote getters - money issues - were absent from the ballot. On Monday voters will decide on two millage issues in addition to electing three new board members for three-year terms each to the Ann Arbor Board of Education. William Stewart, public information officer for the district, said the school administrators are anticipating more voters this year than last. "It would be expected money issues would bring voters out," Stewart said. In addition, the popularity of the library issue should attract voters. Administration officials are predicting about 30 per cent of the district's registered voters will vote tomorrow. The ballot lists nine candidates: Henry Alting, Diana Autin, Wendy Barhydt, Merrylin "Terry" Martin, Patricia Pooley, Charles Votaw, Paul Weinhold, Judith Wood and Christopher Reaske. Reaske withdrew his candidacy more than two weeks ago. A tenth candidate, Trustee Charles Good, filed his petition to run but withdrew in time to keep his name off the ballot. Good was the only incumbent to file. The terms of Good and Trustees Paul Carrington and Robert Conn expire June 30. During the campaign several women candidates have joked about ending sex discrimination on the school board by having one or more of the five femalè candidates elected to the three posts. Since 1968 there has not been a woman on the Ann Arbor board. Last year Mrs. Martin came in fourth place in a threewinner race. The year before Nancy Brussolo came in fourth place behind three men. Mrs. Martin and Votaw are the only candidates who have run for a school board post in previous years., Votaw ran unsuccessfully in the 1971 election. Although the two Parent-Teacher Organization Council candidates nights were better attended than similar meetings held last year, the campaign has been called "lackluster" by at least one school board member and "really dull" by a high school administrator. In a candidates night held Tuesday several candidates referred to the camaraderie and cooperation existing among the eight candidates, citing the common goals of the candidates rather than the differences. In addition to supporting both millage issues; candidates have said they want quality education and equality of educational opportunity for all students. Candidates do differ in their attitudes toward establishing an alternative school for disruptive youths. Candidates in favor are: Mrs. Barhydt, Mrs. Martin and Winhold. Those opposed to the alternative school as discussed at recent board meetings are Alting, Autin, Mrs. Pooley, Votaw and Mrs. Wood. A League of Women Voters questionnaire published in The News Tuesday failed to show any major differences in philosophy among the candidates except between HRP-candidate Autin and the othervseven candidates. Candidates did express varied opinions when asked about how overcrowding in the high schools should be alleviated. Alting said he f a vors building a third high school and using smaller alernative secondary educaton units. Autin said as a Human Right Party candidate she supports the use of small alternative schools rather than building a third large high school. Mrs. Barhydt said she would not support building a third high school "unless its necéssity is clearly justified." Mrs. Martin said if the district's population was apportioned to available classrooms the high schools would not be overcrowded. It is unnecessary to build a third high school, she said. Mrs. Pooley said rather than build a third high school she advocated retaining some ninth grades in the junior high school, establishing small educational core groups physically able to v be relocated in existing school buildings, exploring the availability of other facilities such as Washtenaw Community College for some technical programs and using small additional alternative voluntary high schools. Votaw said he favors a combination of alternatives for the relief of "overcrowding, including building of a third high school and developing alternative secondary educational units in the new high school or elsewhere. Winhold said he is opposed to building a third high school and is also against the use of small alternative high school facilities because of the limited curriculum they can offer. To relieve overcrowding in the high schools, Winhold said, the administration should investígate the impact of returning to the seventh through ninth grade school from the sixth through eighth grade middle schools.. Mrs. Wood said if projected growth figures indícate a third high school is needed, she would favor building a small third high school. Traditional high schools are too large and impersonal, according to Mrs. Wood. The Ann Arbor League of Women Voters will maintain three telephone numbers at which voters may obtain inf ormation concerning the Monday school board and millage elections. The telephone numbers are 761-0978, 971-3428 and 665-3483.