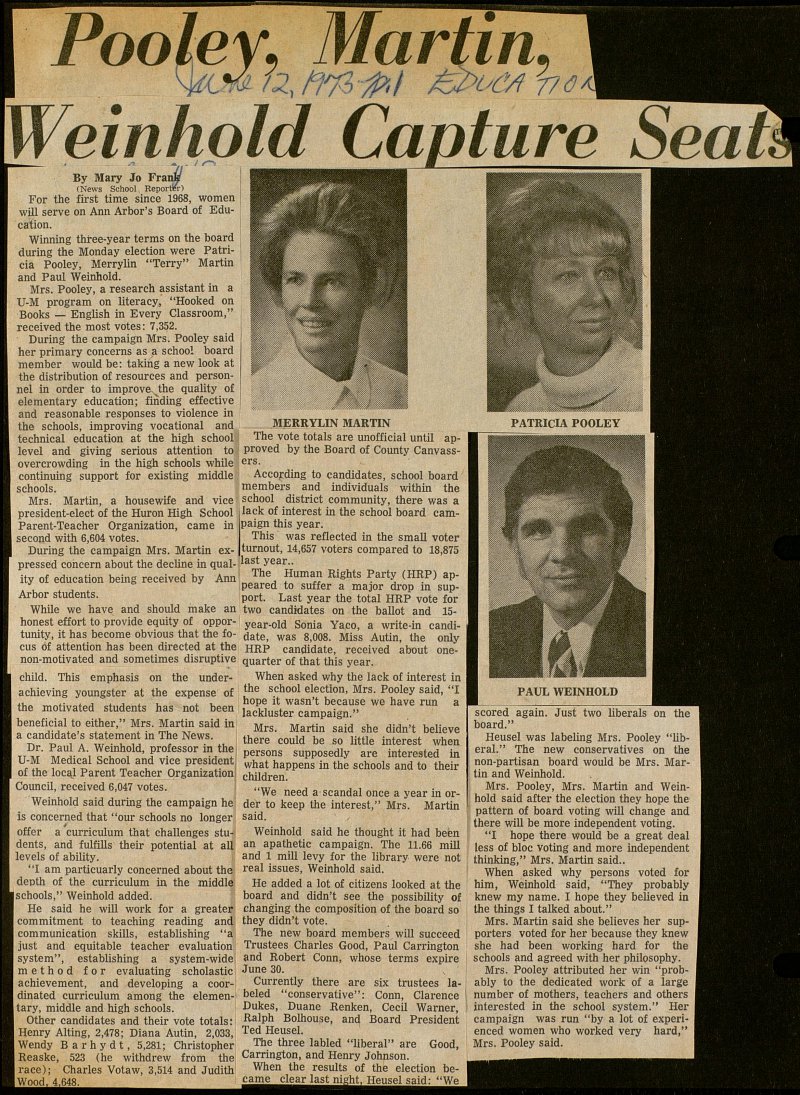 For the first time since 1968, women will serve on Ann Arbor's Board of Education. Winning three-year terms on the board during the Monday election were Patricia Pooley, Merrylin "Terry" Martin and Paul Weinhold. Mrs. Pooley, a research assistant in a U-M program on literacy, "Hooked on Books - English in Every Classroom," received the most votes : 7,352. During the campaign Mrs. Pooley said her primary concerns as a school board member would be: taking a new look at the distribution of resources and personnel in order to improvethe quality of elementary education; finding effective and reasonable responses to violence in the schools, improving vocational and technical education at the high school level and giving serious attention to overcrowding in the high schools while continuing support for existing middle schools. Mrs. Martin, a housewife and vice president-elect of the Huron High School Parent-Teacher Organization, came in second with 6,604 votes. During the campaign Mrs. Martin expressed concern about the decline in quality of education being received by Ann Arbor students. While we have and should make an honest effort to provide equity of opportunity, it has become obvious that the focus of attention has been directed at the non-motivated and sometimes disruptive child. This emphasis on the underachieving youngster at the expense of the motivated students has not been beneficial to either," Mrs. Martin said in a candidate's statement in The News. Dr. Paul A. Weinhold, professor in the U-M Medical School and vice president of the local Parent Teacher Organization; Council, received 6,047 votes. Weinhold said during the eampaign he is concerned that "our schools no longer offer a curriculum that challenges students, and fulfiUs their potential at all levéis of ability. "I am particuarly concerned about the depth of the curriculum in. the middle schools," Weinhold added. He said he will work for a greater commitment to teaching reading and. communication skills, establishing "a just and equitable teacher evaluation system", establishing a system-wide method for evaluating scholastic achievement, and developing a coordinated curriculum among the elementary, middle and high schools. Other candidates and their vote totals: Henry Alting, 2,478; Diana Autin, 2,033, Wendy Barhydt, 5,281; Christopher Reaske, 523 (he withdrew from the race); Charles Votaw, 3,514 and Judith Wood, 4,648. The vote totals are unofficial until approved by the Board of County Canvassers. According to candidates, school board members and individuals within the school district community, there was a lack of interest in the school board campaign this year. This was reflected in the small voter turnout, 14,657 voters compared to 18,875 last year.. The Human Rights Party (HRP) appeared to suffer a major drop in support. Last year the total HRP vote for two candidates on the ballot and 15year-old Sonia Yaco, a write-in candidate, was 8,008. Miss Autin, the only HRP candidate, received about onequarter of that this year. When asked why the lack of interest in the school election, Mrs. Pooley said, "I hope it wasn't because we have run a lackluster campaign." Mrs. Martin said she didn't believe there could be so little interest when persons supposedly are interested in what happens in the schools and to their children. "We need a scandal once a year in order to keep the interest," Mrs. Martin said. Weinhold said he thought it had been an apathetic campaign. The 11.66 mili and 1 mili levy for the library were not real issues, Weinhold said. He added a lot of citizens looked at the board and didn't see the possibility of changing the composition of the board so they didn't vote. The new board members will succeed Trustees Charles Good, Paul Carrington and Robert Conn, whose terms expire June 30. Currently there are six trustees labeled "conservative": Conn, Clarence Dukes, Duane Renken, Cecil Warner, Ralph Bolhouse, and Board President Ted Heusel. The three labled "liberal" are Good, Carrington, and Henry Johnson. When the results of the election became clear last night, Heusel said: "We scored again. Just two liberáis on the board." Heusel was labeling Mrs. Pooley "liberal." The new conservatives on the non-partisan board would be Mrs. Martin and Weinhold. Mrs. Pooley, Mrs. Martin and Weinhold said after the eleetion they hope the pattern of board voting will change and there will be more independent voting. "I hope there would be a great deal less of bloc voting and more independent thinking," Mrs. Martin said.. When asked why persons voted for him, Weinhold said, "They probably knew my name. I hope they believed in the things I talked about." Mrs. Martin said she believes her supporters voted for her because they knew she had been working hard for the schools and agreed with her philosophy. Mrs. Pooley attributed her win i ably to the dedicated work of a large number of mothers, teachers and others interested in the school system." Her campaign was run "by a lot of I enced women who worked very hard," Mrs. Pooley said.