Money: It's Helpful In School Board Race 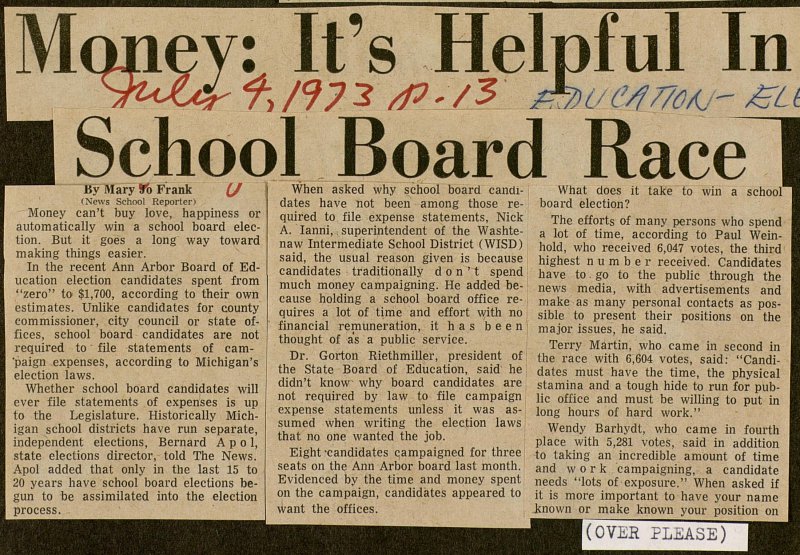 Money can't buy love, happiness or automatically win a school board election. But it goes a long way toward making things easier. In the recent Ann Arbor Board of Education election candidates spent from "zero" to $1,700, according to their own estimates. Unlike candidates for county commissioner, city council or state offices, school board candidates are not required to file statements of cam'paign expenses, according to Michigan's election laws. Whether school board candidates will ever file statements of expenses is up to the Legislature. Historically Michigan school districts have run separate, independent elections, Bernard A p o 1, state elections director, told The News. Apol added that only in the last 15 to 20 years have school board elections begun to be assimilated into the election process. When asked why school board canclidates have not been among those required to file expense statements, Nick A. Ianni, superintendent of the Washtenaw Intermedíate School District (WISD) said, the usual reason given is because candidates traditionally d o n ' t spend much money campaigning. He added because holding a school board office requires a lot of time and effort with no financial remuneration, it has been thought of a's a public service. Dr. Gorton Riethmiller, president of the State Board of Education, said he didn't know why board eandidates are not required by law to file campaign expense statements unless it was assumed when writing the election laws that no one wanted the job. Eight -candidates campaigned for three seats on the Ann Arbor board last month. Evidenced by the time and money spent on the campaign, candidates appeared to want the offices. What does it take to win a school board election? The efforts of many persons who spend a lot of time, according to Paul Weinhold, who received 6,047 votes, the third highest n u m b e r received. Candidates have to . go to the public through the news media, with advertisements and make as many personal contacts as possible to present their positions on the major issues, he said. Terry Martin, who came in second in the race with 6,604 votes, said: "Candidates must have the time, the physical stamina and a tough hide to run for public office and must be willing to put in long hours of hard work." Wendy Barhydt, who came in fourth place with 5,281 votes, said in addition to taking an incredible amount of time and work campaigning, a candidate needs "lots of exposure." When asked if it is more important to have your name known or make known your position on (OVER PLEASE)