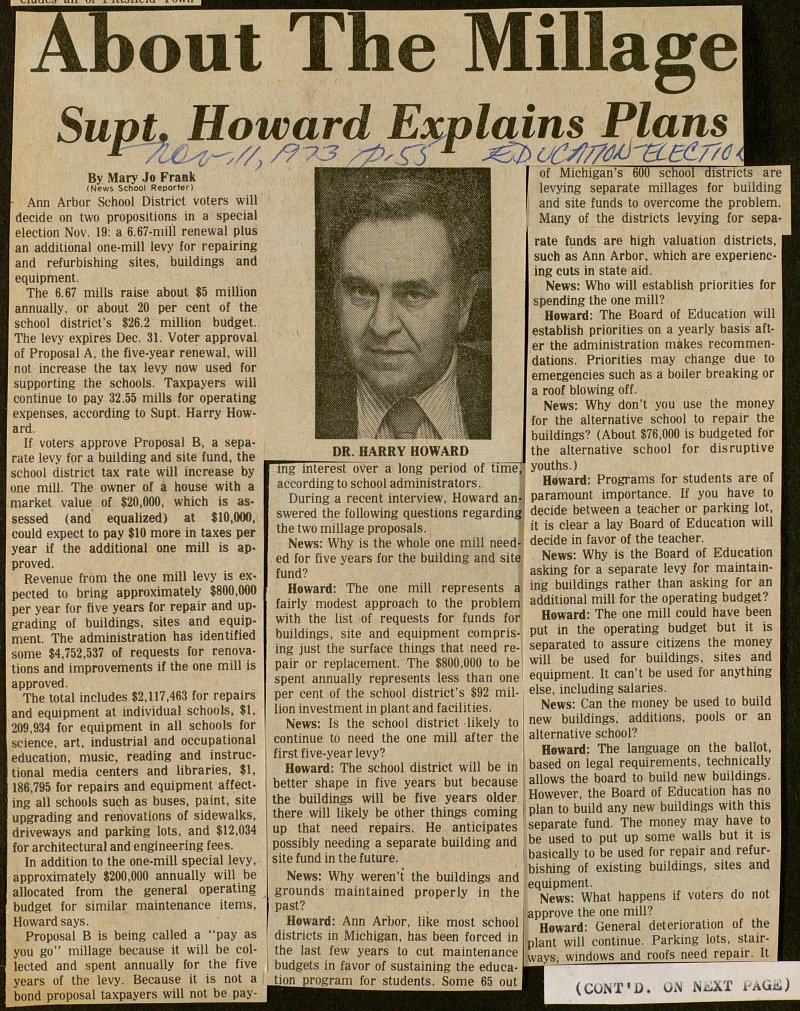 ■ Ann Arbor School District voters will decide on two propositions in a special election Nov. 19: a 6.67-miíl renewal plus an additional one-mill levy for repairing and refurbishing sites, buildings and equipment. The 6.67 milis raise about $5 million annually, or about 20 per cent of the school district's $26.2 million budget. The levy expires Dec. 31. Voter approval. of Proposal A, the five-year renewal, will not increase the tax levy now used for supporting the schools. Taxpayers will continue to pay 32.55 milis for operating expenses, according to Supt. Harry Howard. If voters approve Proposal B, a separate levy for a building and site fund, the school district tax rate will increase by one mili. The owner of a house with a market value of $20,000, which is assessed (and equalized) at $10,000, could expect to pay $10 more in taxes per year if the additional one mili is approved. Revenue from the one mili levy is expected to bring approximately $800,000 per year for five years for repair and upgrading of buildings, sites and equipment. The administration has identified some $4,752,537 of requests for renovations and improvements if the one mili is approved. The total includes $2,117,463 for repairs and equipment at individual schools, $1, 209,934 for equipment in all schools for science, art, industrial and occupational education, music, reading and instructional media centers and libraries, $1, 186,795 for repairs and equipment affecting all schools such as buses, paint, site upgrading and reriovations of sidewalks, driveways and parking lots, and $12,034 for architeetural and engineering fees. In addition to the one-mill special levy, approximately $200,000 annually will be allocated from the general operating budget for similar maintenance items, Howard says. Proposal B is being called a "pay as you go" millage because it will be collected and spent annually for the five years of the levy. Because it is not a bond proposal taxpayers will not be ing interest over a long period of time, accordingto school administrators. During a recent interview, Howard an-; swered the following questions regarding the two millage proposals. News: Why is the whole one mili needed for five years for the building and site fund? Howard: The one mili represents a fairly modest approach to the problem with the list of requests for funds for buildings, site and equipment comprising just the surface things that need repair or replacement. The $800,001) to be spent annually represents less than one per cent of the school district's $92 million investment in plant and facilities. News: Is the school district ■ likely to continue to need the one mili after the firstfive-yearlevy? Howard: The school district will be in better shape in five years but because the buildings will be five years older there will likely be other things coming up that need repairs. He anticipates possibly needing a separate building and site fund in the future. News: Why weren't the buildings and grounds maintained properly in the past? Howard: Ann Arbor, like most school districts in Michigan, has been f o reed in the last few years to cut maintenance budgets in favor of sustaining the educación program for students. Some 65 out of Michigan's 600 school districts are levying separate millages for building and site funds to overeóme the problem. Many of the districts levying for separate funds are high valuation districts, I such as Ann Arbor, which are experiencing cuts in state aid. News: Who will establish priorities for spending the one mili? Howard: The Board of Education will establish priorities on a yearly basis after the administration makes recommendations. Priorities may change due to emecgencies such as a boiler breaking or a roof blowing off. News: Why don't you use the money for the alternative school to repair the buildings? (About $76,000 is budgeted for the alternative school for disruptive youths.) Howard: Programs for students are of paramount importance. If you have to decide between a teacher or parking lot, it is clear a lay Board of Education will decide in favor of the teacher. News: Why is the Board of Education asking for a separate levy for maintaining buildings rather than asking for an additional mili for the operating budget? Howard: The one mili could have been put in the operating budget but it is separated to assure citizens the money will be used for buildings, sites and equipment. It can't be used for anything else, including salaries. News: Can the money be used to build new buildings, additions, pools or an alternative school? Howard: The language on the ballot, based on legal requirements, technically allows the board to build new buildings. However, the Board of Education has no plan to build any new buildings with this separate fund. The money may have to be used to put up some walls but it is basically to be used for repair and refurbishing of existing buildings, sites and equipment. News: What happens if voters do not approve the one mili? Howard: General deterioration of the plant will continue. Parking lots, stairwavs, Windows and roofs need repair. It (CUttT'ü. ON NXT tAüú)