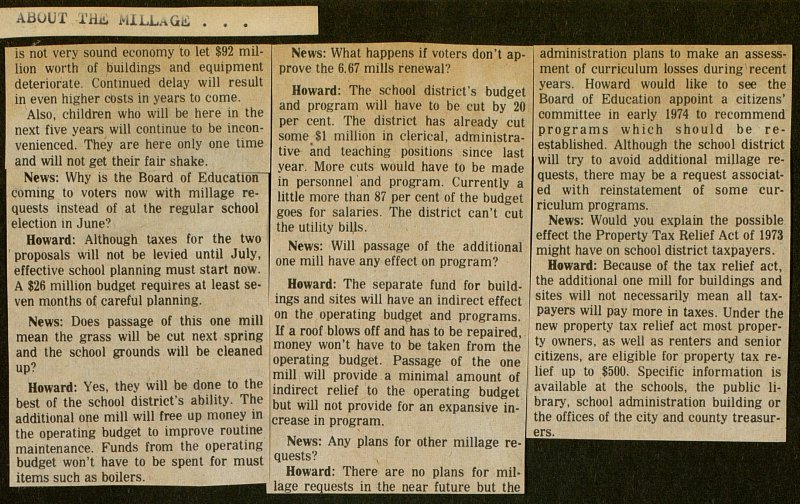 AÜOUT THE MILLAGfi . . . is not very sound economy to let $92 million worth of buildings and equipment deteriórate. Continued delay will result in even higher cösts in years to come. Also, children who will be here in the next five years will continue to be inconvenienced. Théy are here only one time and will not get their fair shake. News: Why is the Board of Education coming to voters now with millage requests instead of at the regular school election in June? Howard: Although taxes for the two proposals will not be levied until July, effective school planning must start now. A $26 million budget requires at least seven months of careful planning. News: Does passage of this one mili mean the grass will be cut next spring and the school grounds will be cleaned up? Howard: Yes, they will be done to the best of the school district's ability. The additional one mili will free up money in the operating budget to improve routine maintenance. Funds from the operating budget won't have to be spent for must items such as boilers. News: What happens if voters don't approve the 6.67 milis renewal? Howard: The school district's budget and program will have to be cut by 20 per cent. The district has already cut some $1 million in clerical, administrativa ánd teaching pósitions since last year. More cuts would have to be made in personnel and program. Currently a little more than 87 per cent of the budget goes for salaries. The district can't cut the utility bilis. News: Will passage of the additional one mili have any effect on program? Howard: The separate fund for buildings and sites will have an indirect effect on the operating budget and programs. If a roof blows off and has to be repaired, money won't have to be taken from the operating budget. Passage of the one mili will provide a minimal amount of indirect relief to the operating budget but will not provide for an expansive increase in program. News: Any plans for other millage requests? Howard: There are no plans for mil-l lage requests in the near future but the I administration plans to make an assessment of curriculum losses during recent years. Howard would like to see the Board of Education appoint a citizens' committee in early 1974 to recommend programs which should be reestablished. Although the school district will try to avoid additional millage requests, there may be a request associated with reinstatement of some curriculum programs. i News: Would you explain the possible effect the Property Tax Relief Act of 1973 might have on school district taxpayers. Howard: Because of the tax relief act, the additional one mili for buildings and sites will not necessarily mean all I payers will pay more in taxes. Under the I new property tax relief act most I ty owners, as well as renters and senior I citizens, are eligible for property tax I lief up to $500. Specific information is I available at the schools, the public I brary, school administration building or I the offices of the city and county I ers.